The Power of Authenticity in Social Behavioral Change Communications - CARE

The Power of Authenticity in Social Behavioral Change Communications 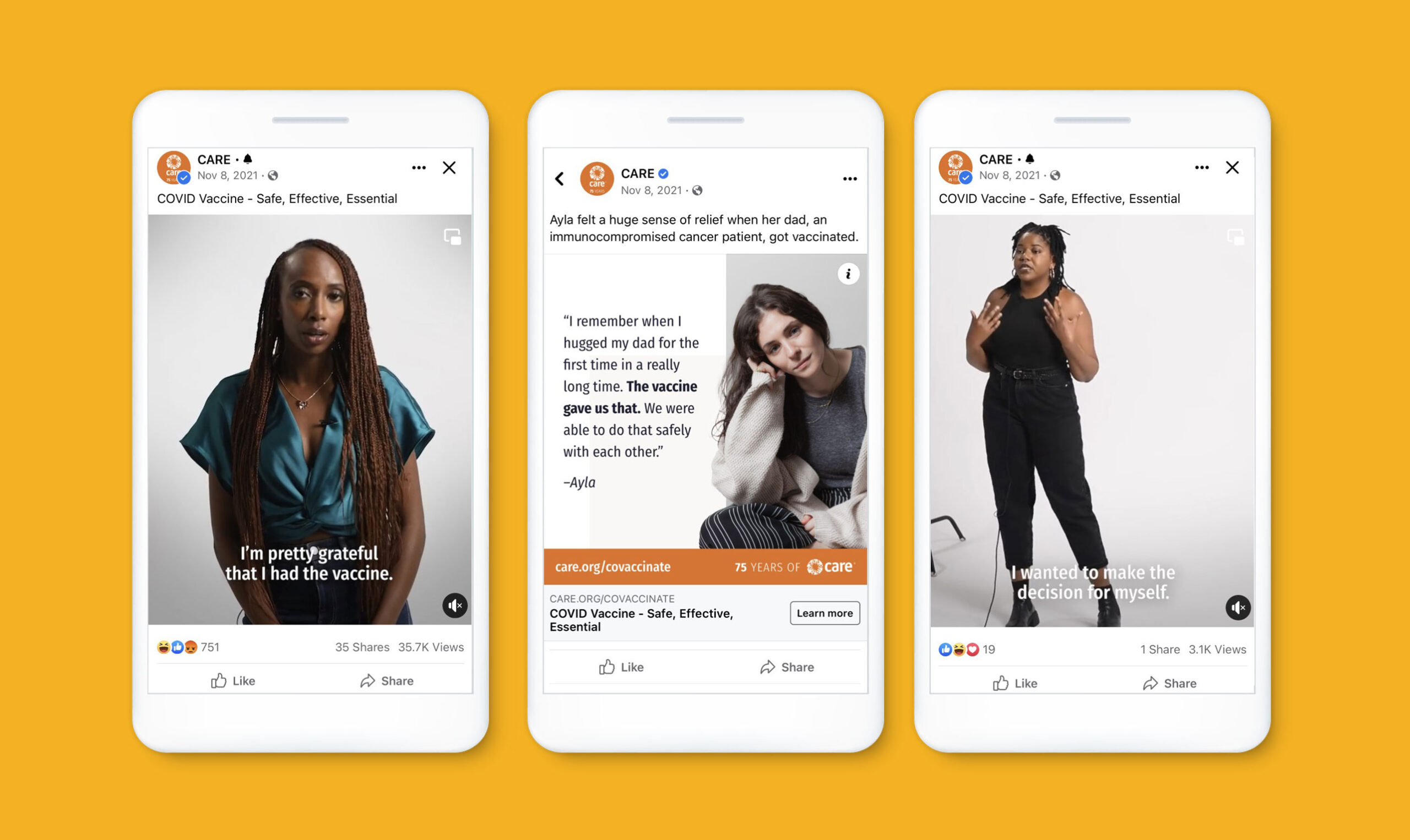 Personal stories prove trustworthy when it comes to social media.

Through a partnership with Meta, formerly Facebook, CARE USA tested social and behavioral change communication (SBCC) strategies on the Meta platform throughout 2021. Our shared aim was to see if vaccine hesitancy could be reduced at scale using social media, in particular through Facebook and Instagram advertising.

Throughout the year, CARE USA worked with healthcare workers, celebrities, faith leaders and veterans to share messages about the COVID vaccine’s safety and effectiveness. Building on learnings from these campaigns and the undisputed efficacy of word-of-mouth marketing, CARE explored the power of personal stories focused on themes of choice and the confidence to live freely in December of 2021. Based on insights from social listening and the UNICEF Vaccine Messaging Guide, we knew these themes could be powerful in helping to drive behavioral change.

We created ads featuring personal stories from a series of women who had been impacted by COVID-19 and were initially vaccine hesitant. Many of the stories shared talked about the impact COVID-19 had on their families, so CARE decided to run the series in November, ahead of Thanksgiving and other holiday travel when we knew our target audience would be planning to gather with their families.

Here are some of the ads

When this campaign ran, from November 10 – December 3, 2021, the Delta variant was rampant and a new variant, Omicron, was discovered and spreading. COVID cases, particularly amongst unvaccinated populations, continued to spike. At this time, boosters were approved for adults and vaccines were available for children age five and older. In most states, vaccine acceptance was on the rise. Despite this, 70% of our target audience, (conservative adults ages 18-49) remained hesitant about the COVID vaccines.

CARE created long videos (over one minute), short videos (thirty seconds) and bold, static image ads to validate our hypothesis that a combination of formats would drive impact. The stories themselves were varied – from Ayla whose dad was immunocompromised, to Salome who had gotten COVID twice, to Praise who encouraged people to “focus on the bigger picture” of protecting those around them. Each story was infused with a theme of “freedom and liberty” around what the vaccine allowed them to do in their lives. The idea of “living your dream life,” or having the “freedom to live,” was another strong theme we found in our research that seemed to resonate globally.

Unlike other ads, these did not ask viewers to get the vaccine, but rather focused on everyone’s reasons for making the choice to get it. Of all the trusted messenger ads CARE USA ran in 2021, these were the least scripted and might be considered the “softest” direct call to action to get vaccinated.

This campaign replicated the results we saw with the veterans campaign where the combination of bold, static graphics and short videos (30 seconds), seemed to drive success.

The click-through rate (CTR) of 1.14% was +500% vs. CARE USA’s average and this was partially due to optimizing for landing page views vs. reach. Due to the higher CTR, site sessions to the landing page were +183% vs. the Veterans campaign and concurrently, clicks to register for the vaccine (the button directs people to the CDC’s vaccine finder page) were +327%. This amounted to a conversion rate (CVR) of 3%, our highest overall CVR across all our campaigns to reduce vaccine hesitancy. This metric of CVR was a key indicator for us as it was the closest “performance” metric we could get to directly correlating our campaign with vaccine uptake.

Using Meta’s brand lift tool, we surveyed audiences exposed and not exposed to the campaign to look for a difference in their attitudes. Because research shows that people’s knowledge, attitudes, and behaviors can be shifted by increasing their perception of social acceptance and norming, we hoped to see a 2-point lift or better with our audience, meaning that the people who saw the campaign were more likely – by two percentage points or more – to express positive attitudes toward the promoted behavior or question. Again, CARE’s target audience was vaccine hesitant 18–49-year-old adults.

Similar to CARE’s campaigns featuring faith-based leaders, healthcare workers, and celebrities, this series of personal story ads all showed a lift in brand trust. Overall, trustworthiness saw a +1.8pt lift, the highest overall lift of the year in this category. Most notable, men 25-34 had a +3.4pt lift.

Because these ads were so personal, CARE asked a Social Norming question in the brand lift study for the first time.

“When you think of most people whose opinion you value, how much would they approve of people getting a COVID-19 vaccine?”

The campaign also saw small lifts for belief in the vaccine’s safety and importance for females 18-24: 2.9pts and 2pts respectively.

With Omicron spreading quickly and the ability for those ages 5-11 to be vaccinated, CARE launched a campaign in late December 2021 that builds on some of the key learnings and encourages parents to ‘get the whole family vaccinated’. We look forward to sharing the results here as we have them and to continue to test into ways social media can be leveraged to drive social and behavioral change.

Since the outbreak of COVID-19, CARE has worked around the world to provide public health messaging, hygiene kits, and clean water, and is working to ensure fast and fair vaccine distribution to everyone, everywhere.