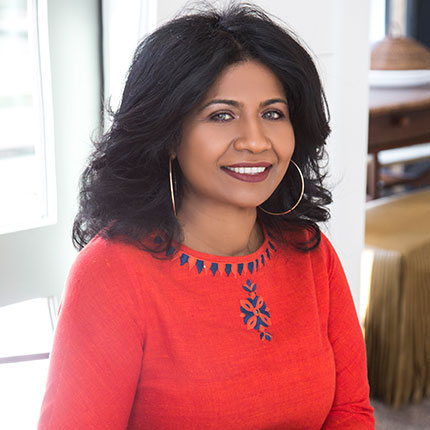 Asha Gomez is the author of the cookbook My Two Souths with Running Press (Perseus Books) which launched in 2016. My Two Souths has received rave reviews from the Washington Post, Garden and Gun, and the New York Times to name a few. My Two Souths was nominated as a finalist for a James Beard Award in the American Cooking category and won the prestigious Piglet Award for best cookbook. In addition, the cookbook was a finalist in Gourmand’s World Cookbook Awards. Asha’s second cookbook featuring global cuisine is called I Cook In Color, (Running Press) globally released on Oct 2020.

In 2017, Asha was featured twice in the New York Times in a piece named “A chef’s quest in India” and “Spice-laden Kerala…” chronicling an incredible trip to Kerala, India. She is most passionate about her advocacy and policy work in reducing global food insecurity with her work with CARE, the United Nations, and the James Beard Foundation. In January 2020 Asha worked with Share Our Strength/No Kid Hungry to study the largest subsidized school lunch program in the world (India) to utilize as a model in the U.S. Throughout her career, Asha has used food as a platform to connect people across countries and cultures and has seen firsthand how food and nutrition can enhance the lives of those facing poverty. Her engaging demeanor and remarkable ability to translate wonkish research into compelling personal narratives makes her a highly sought after speaker nationally and internationally as a panelist, presenter, and moderator- including 2019 with the United Nations’ Global Nutrition Summit- the Bill & Melinda Gates Foundation.

Most recently, she is featured in Chef David Chang’s web series Ugly Delicious currently streaming on Netflix. Season 2 of Ugly Delicious features Asha with Chef David Chang traveling to Kerala, India, and was released in March 2020. Gomez launched Cardamom Hill Restaurant in January 2012 in Atlanta. An instant success, the restaurant received praising reviews; Cardamom Hill was named one of Bon Appetit’s 50 Best New Restaurants, was on the James Beard Semi-Finalist List of 20 Best New Restaurants, one of Southern Living’s 5 Best Restaurants in the South.

She has also been showcased in feature stories in the Wall Street Journal, Conde-Nast Traveler, Atlanta Journal-Constitution, and numerous other national publications and her recipes have appeared in issues of Food & Wine, Bon Appetit, Country Living, Southern Living, Garden & Gun, People Magazine and numerous other publications.

She founded and currently runs The Third Space-a culinary studio and multi-functional event space in Atlanta, GA, where she regularly hosts dinners.

Her favorite endeavor is raising her 15-year-old son Ethan to be a socially-conscious world changer.