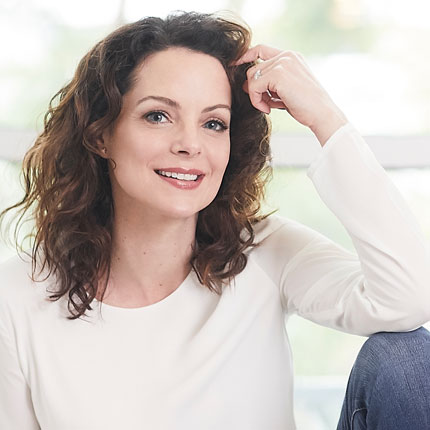 Kimberly Williams-Paisley is an actress, New York Times best-selling author, Alzheimer’s advocate, and co-founder of non-profit, The Store, an organization in Nashville which aims to address food insecurity. She’s appeared in many film, television and theater productions in her career, including Father of the Bride, its sequel, and the recent Father of the Bride Part 3(ish) mini-sequel, co-starring Steve Martin, Diane Keaton and Martin Short. More recently, she starred in Netflix’s The Christmas Chronicles and its sequel, The Christmas Chronicles 2, with Kurt Russell and Goldie Hawn. Her television credits include: the long-running ABC comedy series According to Jim (of which she also directed three episodes), and more recently Netflix’s Heartstrings movie “Jolene,” opposite Dolly Parton and Julianne Hough.

Williams-Paisley’s memoir Where The Light Gets In: Losing My Mother Only to Find Her Again, chronicling her mother’s battle with Alzheimer’s disease (Crown imprint, Penguin Random House), came out in 2016 and hit the New York Times best-seller list. She was honored with a Champion Award in 2016 from the Alzheimer’s Association for her advocacy work dedicated to sharing her family’s story, funding research and supporting caregivers. Her annual Dance Party to End Alz in Nashville has raised over a million dollars in its first three years.

In 2020, Williams-Paisley and her husband Brad Paisley opened a free, referral-based grocery called The Store. In partnership with Belmont University, this non-profit aims to empower and dignify individuals and families seeking self-sufficiency by providing choices for their food needs. In light of the pandemic and the Nashville tornadoes last March, they have incorporated disaster relief into what they do, recently surpassing over a million meals donated, and serving five times more people than they’d anticipated in their first year.

Kim is a global ambassador for CARE International, including traveling to Haiti and Guatemala to follow U.S. funding for programs that support women and children, and then sharing her story back home, including engaging with lawmakers on Capitol Hill to help preserve global health funding. She is a spokesperson for CARE’s She Feeds the World partnership with the PepsiCo Foundation to address food insecurity and tackle gender inequality in the agriculture sector. In 2020, she joined Charlize Theron’s Together For Her campaign in partnership with CARE, to help deploy funds and support the global fight against domestic violence during the time of COVID-19.