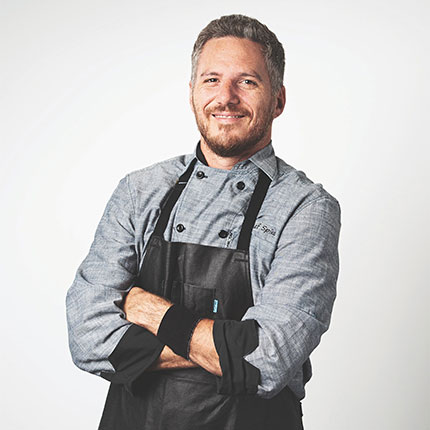 Spike’s career, spanning nearly three decades, can be described as nothing short of creatively diverse. From chef and restaurateur to television personality, product developer and consultant, Spike is a force to be reckoned within the culinary world.

After graduating from the Culinary Institute of America, Spike worked with some of the world’s most renowned chefs and restaurateurs such as Gerard Boyer, Thomas Keller, Sirio Maccioni and Drew Nieporent. After making his television debut on Bravo TV’s Top Chef, Spike went on to appear on several other cooking-related shows, including “Life After Top Chef,” “Iron Chef America,” “Late Night Chef Fight” and “Beat Bobby Flay.” He also hosted “Midnight Feast” and “Food Network’s Kitchen Sink.”

In 2008, Spike opened up the first restaurant in his culinary empire on Washington DC’s Capitol Hill: Good Stuff Eatery. His burger joint quickly became a favorite of political elites, including President Barack Obama. This success inspired a cookbook (The Good Stuff Cookbook) and led to multiple locations across the country and overseas. Following the opening of Good Stuff Eatery, Spike opened up We, The Pizza, Béarnaise and Santa Rosa Taqueria. Spike’s newest restaurant, PLNT Burger, is dedicated to crafting and redefining some of America’s favorite foods without the use of any animal products. Outside of his restaurants, Spike’s popular DC speakeasy (The Sheppard) paved the way for a second concept called The Morris.

Applying his experience and expertise as a chef and restaurateur, Spike has worked with several brands by providing them with creative and comprehensive culinary consulting services. Spike is currently designing kitchens as culinary director for Van Metre Homes, Northern Virginia’s premier home builder. Other consulting projects include Sunny’s and Campton Yard in Miami Beach and Vim & Victor at the state-of-the-art sports and active entertainment center, The St. James, in Virginia.

In an effort to put his passion for food equity and education into action, Spike began working with organizations like CARE and DC Central Kitchen as a chef ambassador and contributor. His work landed him the position as the first chairman of DC’s Food Policy Council. He has used his voice to speak out about improving the quality of school lunches, equal access to whole and healthy foods and for the protection of the SNAP program. Spike continues to partner with groups like Food Rescue US and Food Policy Action to make a positive impact on our food system.

Most recently, Spike has combined his intimate knowledge of the Relais & Chateau kitchen life with his experience in media production by partnering with Show of Force as an executive producer to deliver a riveting and never-before-seen look behind the curtain that is “The Inn at Little Washington.” “The Inn At Little Washington: A Delicious New Documentary” premiered at the Virginia Film Festival in 2019, aired on PBS in early 2020 and is now available on Amazon Prime Video.

Spike lives in the DC area with his wife, Cody, and their son. When he’s not in the kitchen or lobbying on The Hill, Spike can be found surfing any river or ocean that has a wave.