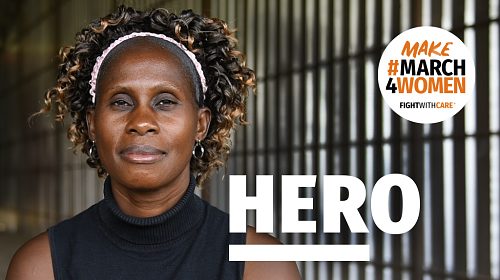 ATLANTA (Feb. 20, 2019) – The month of March has long been a time to champion women. But those efforts often happen on separate tracks: recognizing the accomplishments of women in the United States as part of Women’s History Month; and celebrating women and girls as change makers around the world on March 8, International Women’s Day. This March the global poverty-fighting organization CARE will unite those conversations through an action-packed, monthlong campaign called Make #March4Women. The multi-channel campaign will feature: videos of celebrities honoring their heroes; a shareable quiz whereby people learn who their ‘sister hero’ is; a public opinion poll called What Women Want Now; and powerful stories of women and girls whose heroic efforts too often go unnoticed around the world.

Through Make #March4Women, corporations, celebrities and other partners will rally the public to help tear down stubborn barriers holding women back and trapping millions of people in poverty across the globe. Their voices will join those of family farmers in Rwanda, domestic workers in Ecuador and other everyday heroes worldwide. All will unite in sharing who, in their lives, puts the “HER in HERO” – the campaign’s theme.

For decades CARE® has been leading innovative global programs that empower women and ignite transformational change through financial inclusion, health, education, and dignified work. Throughout the month of March, supporters can put the “HER in HERO,” by sharing stories, engaging in conversations, and donating to invest in CARE’s work.

“Every day, in more than 90 countries, CARE works side by side with the world’s true superheroes,” said Michelle Nunn, president and CEO of CARE. “They are relentless, tough and tender. Their superpowers are many, and chief among them is courage. But they should not be left to fight gender inequality and poverty alone. Armed with the opportunity to learn, earn and lead, we know women and girls can lift their families and their communities out of poverty.”

Starting March 1, interested individuals can visit fight.care.org to pledge their support for women and girls everywhere, make online donations, watch inspirational videos and more.  Donations will help CARE scale up innovative programs in many areas of women’s empowerment, from financial inclusion and market access to education and health to agriculture and dignified work.

Several corporate partners have already committed to support CARE during March. Longtime partner Gap Inc. is offering select International Women’s Day (IWD) products or donations from Gap, Athleta, Old Navy, and Banana Republic, in partnership with CARE to support Gap Inc.’s P.A.C.E. program. Examples will include a “HERO” t-shirt at Old Navy, a special collection of tees featuring the voices of inspiring women from Gap available February 25, and the first Equality Collection of IWD-inspired t-shirts and accessories at Banana Republic, which will also launch a point of sale consumer donation campaign in the U.S. More details by brand will be available on March 1 here.

Additional cause marketing retail partners include: Olivela (olivela.com), which will contribute 20 percent of proceeds from the sale of select products to CARE to fund girls’ education; The Little Market (thelittlemarket.com), which will be custom-designing a limited-edition “HERO” bag and candle with 50 percent of the retail price benefitting CARE; and Little Switzerland, which is launching a year-round $10 per product donation to CARE for their new jewelry line Nuri & Ash (nuriandash.com.) Mars Chocolate craft brand Ethel M® (ethelm.com) is contributing $5 per box from their 16 pc limited-edition CARE collection of premium chocolates; and their boutique gourmet food brand THE COCOA EXCHANGE® (mytcesite.com) is contributing 10% of the retail sales for their Chocolate Martini Mix. Other corporate partners supporting CARE during March include The Starbucks® Foundation, The Hain Celestial Group, Inc., DOVE® Chocolate, and The PepsiCo Foundation.

CARE, in partnership with HuffPost and Yahoo, also will release results of a public opinion poll called What Women Want Now, a survey of more than 1,000 American women on topics such as gender equality, women and politics, workplace issues and gender-based discrimination faced by women globally.

Make #March4Women is a signature awareness and engagement moment within CARE’s year-round FIGHT WITH CARE® fundraising campaign, a bold commitment to raise $2 billion over five years in order to improve the lives of more than 200 million people in the areas of: education and work for women and girls; maternal and child health; humanitarian and emergency response; and food and nutrition.

About CARE: Founded in 1945 with the creation of the CARE Package®, CARE is a leading humanitarian organization fighting global poverty. CARE places special focus on working alongside poor girls and women because, equipped with the proper resources, they have the power to lift whole families and entire communities out of poverty. Last year CARE worked in 95 countries and reached more than 56 million people around the world. To learn more about CARE and our FIGHT WITH CARE® campaign, visit fight.care.org.