Meet Mona, a Syrian Refugee who Sacrificed Everything to Keep her Family Safe 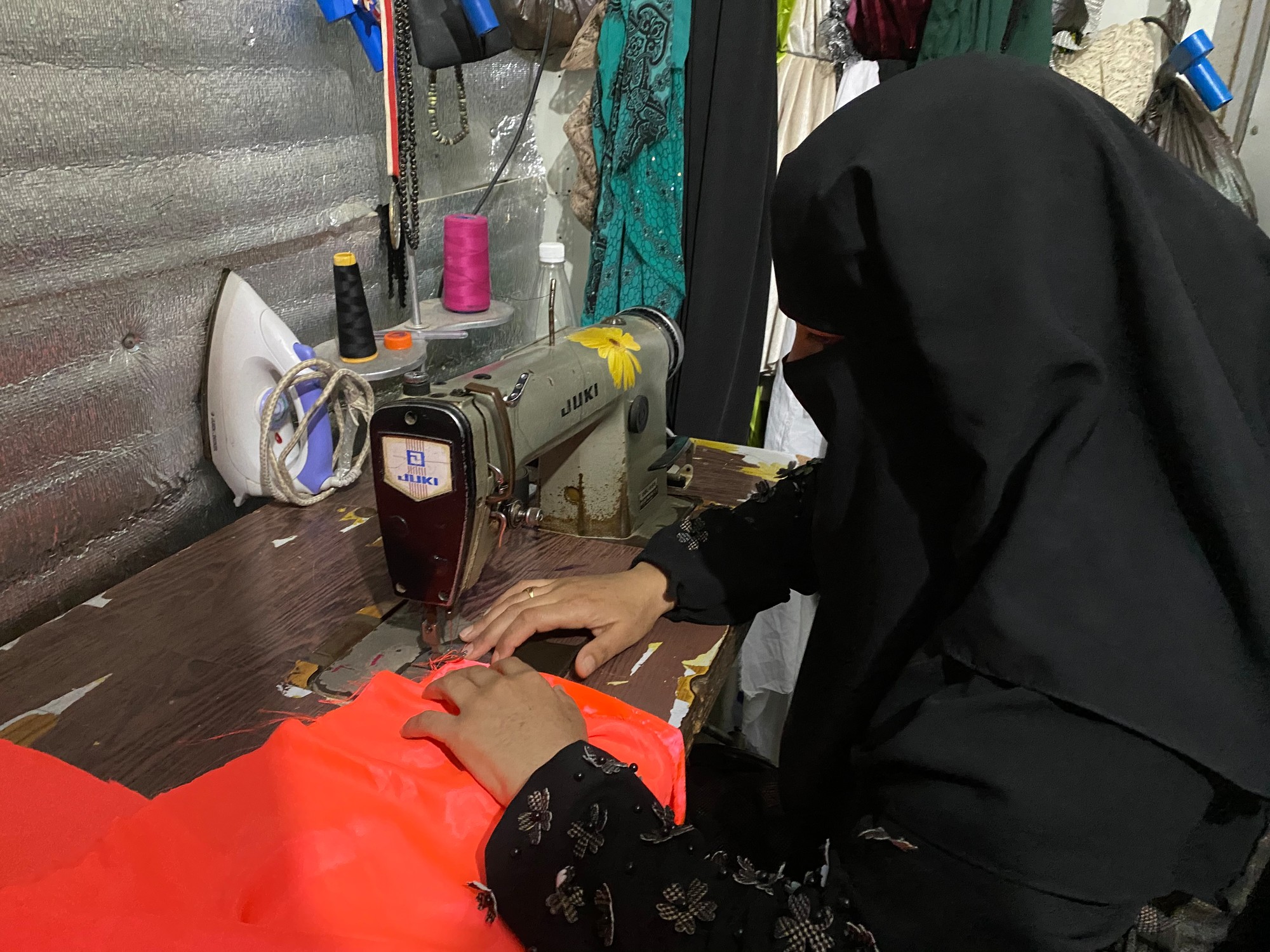 All photos by CARE

All photos by CARE

From raising her children in a war zone to fleeing and finding a new passion for sewing through a CARE program, Mona remains resilient and determined.

Mona, 37, is originally from Aleppo, Syria, which was the country’s largest city before the conflict began more than 10 years ago. She now lives in Jordan’s Azraq refugee camp with her husband and five children. She spoke to CARE about her life in Syria, fleeing the conflict, living in Azraq camp, COVID-19, and finding a new passion in sewing.

A Glimpse into My Life

I’ve enjoyed a happy and stable marriage. My husband and I were successfully managing our lives before the crisis broke out in Syria. Everything was easy, accessible and manageable for us. Back in 2006, my husband moved to Jordan, seeking a job with a higher income. He visited us once every month before the war started. In mid-2012, the borders officially closed and he was no longer able to visit. I was suddenly all alone with four children and pregnant with our fifth child. I always thought that things will eventually get better and we will go back to our normal life, but things got worse instead.

Years of War with My Little Ones

These were the toughest years of my life. I was raising a family on my own in the middle of a war zone. My children were my biggest concern and worry. I just wanted them to stay safe and be as little impacted as possible. They were scared all the time, they were constantly terrified of the noises they heard. Although I was scared to death as well, God gave me the power and courage to try and make it easier for them. Whenever I heard loud bombings, I used to gather my children around me and play games with them. I tried to make them believe that are fully protected and none of us would be harmed. I had no other option. I never left their side; we were right next to one another all the time. My last seven months in Syria were terrifying. They were full of pain and sorrow. It was no longer bearable, but I never lost hope. I just knew it was the right time to leave and provide my children with a life of dignity and safety.

The death journey is what I call our passage from Syria to Jordan, because of the misery and danger we faced along the way.

The death journey is what I call our passage from Syria to Jordan because of the misery and danger we faced along the way. I do not actually have the right words to describe it. It was a real struggle for survival. On a freezing cold day, we left with some other Syrian families on a small bus, without any windows, heading to Jordan. It was a 15-hour long ride. I was holding my kids in my arms all the time, trying to provide them with a sense of safety and warmth. They were shivering with cold.

We arrived near the Syria-Jordan border at around seven in the morning. We stepped out of the bus and walked for around one hour until we reached a camp between the borders. I was frightened because I had arrived to the unknown. With the support of the organizations that were present and the government of Jordan, we were briefed on the situation and given instructions on what to do. I grabbed our small tent and started building it in the middle of the street. We were all covered in snow, but I was hoping that we will enter Jordan within a few hours. Little did I know that we would end up staying there for two months and 18 days, before being allowed to enter Jordan and head to Azraq Camp.

Our Arrival to Azraq Camp

I was really relieved when we reached Azraq Camp. I was looking forward to settling down in a safe environment with my children. Upon our arrival, I communicated with my husband, who was not aware of what had happened to us after our departure from Syria. Everyone was supportive and helpful and made us feel welcomed. For me, living in the camp is like being in heaven. After four years apart, my children finally saw their father again. It was a beautiful and overwhelming moment. We were all smiling and crying at the same time. My husband finally met our youngest child who I had given birth to in early 2013. Everything has been going well in the camp. The most important thing is that we are safe and secure and I do not have to worry about my children’s lives. Despite all the struggles and obstacles, whenever I look into my children eyes, I feel that I achieved so much in my life. They are my happiness. 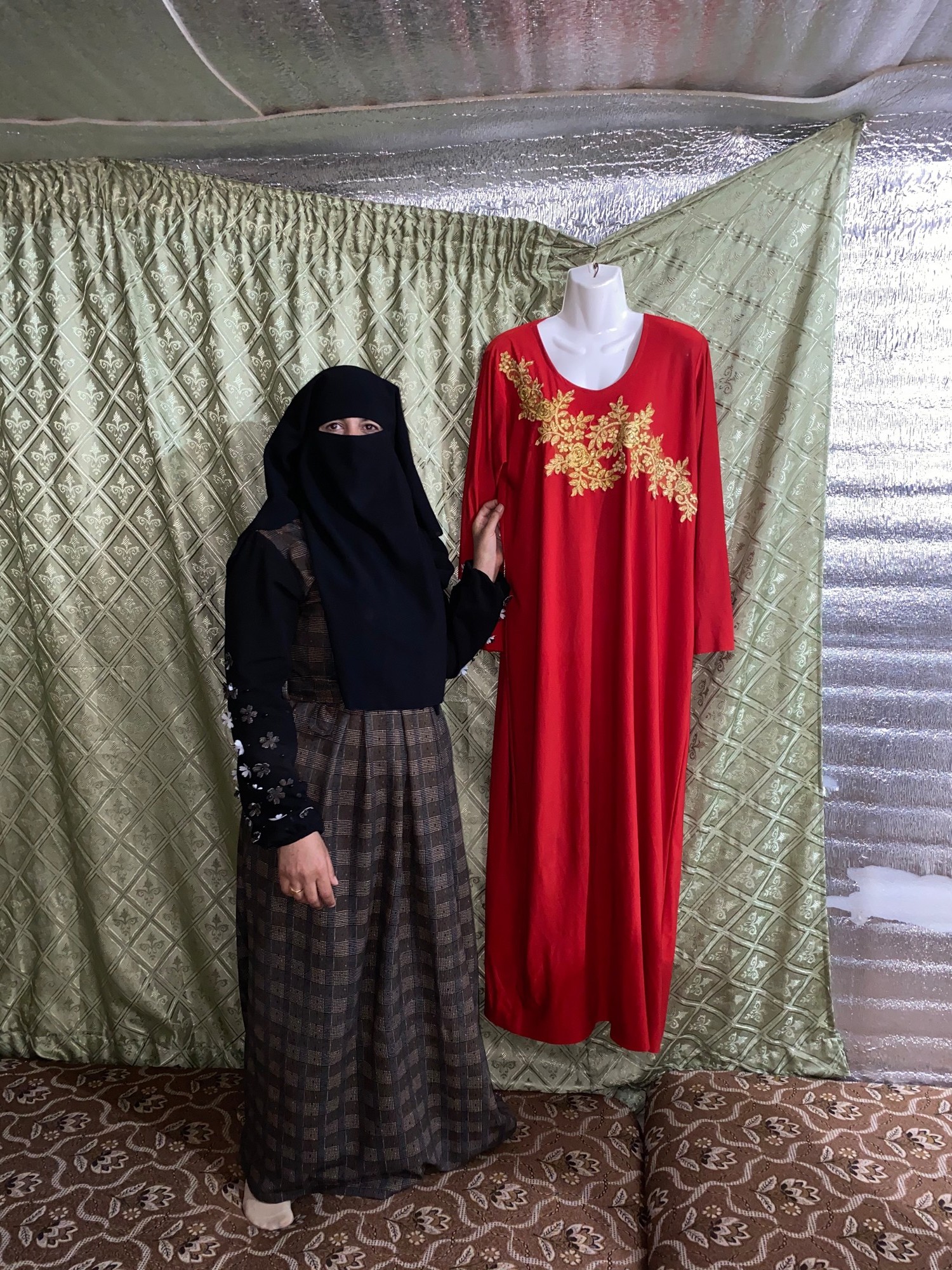 One of the beautiful dresses Mona has sewn. 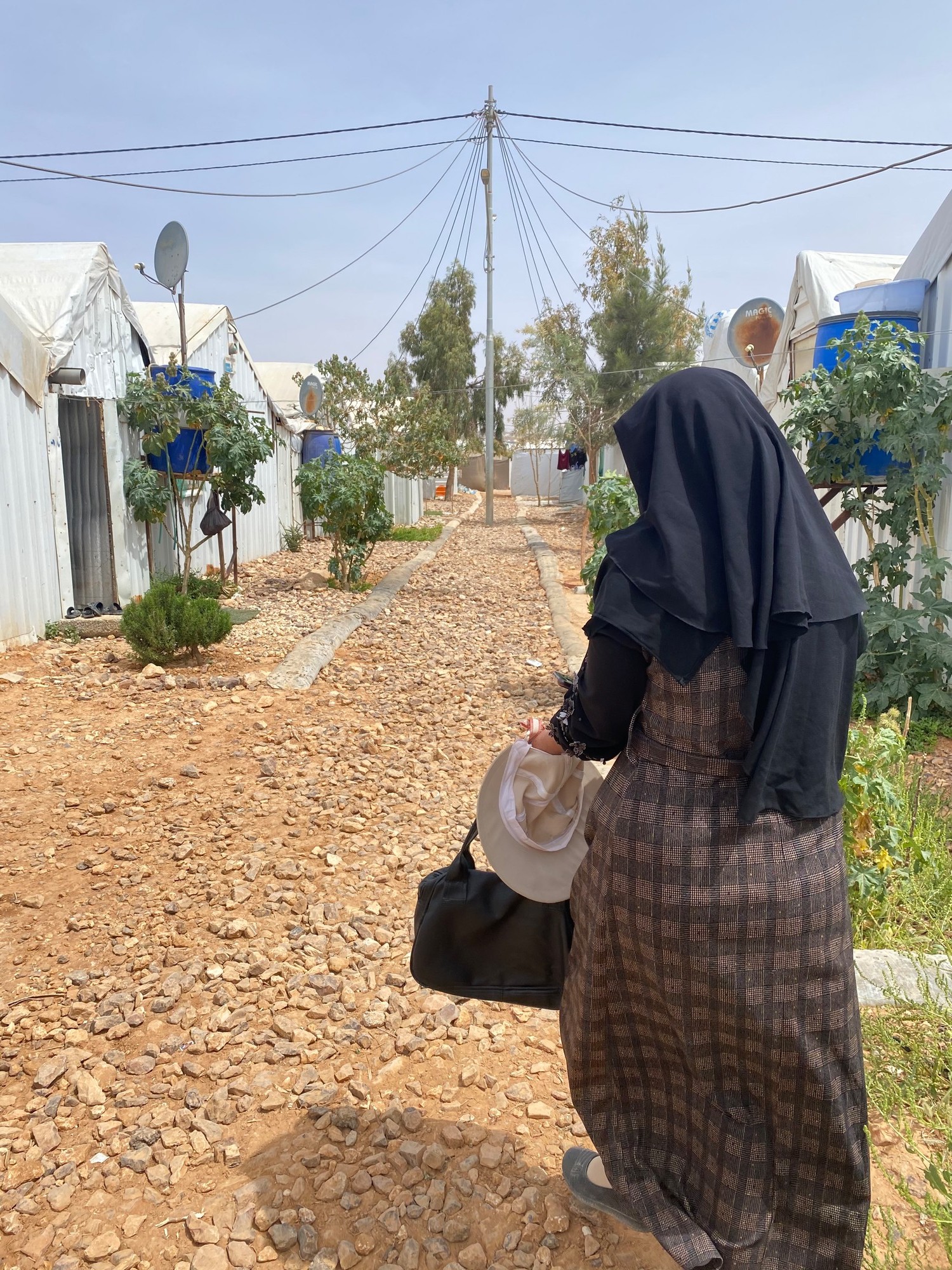 Mona walks in her neighborhood village in Azraq camp.

Discovering a New Passion and Skill

My neighbors introduced me to CARE International in the camp and told me about the workshops and activities they do. I honestly had no idea about the existence of international organizations and the type of services they provide. I was excited to learn about them and the opportunity to build something for myself.

Back in Syria, I dropped out of school when I was only 12 years old. This was the first time I think about doing something for myself, since then. I registered in the sewing and beauty workshops with the organization. I was really enjoying my time because I was meeting other women who became my close friends. This also boosted my confidence and self-esteem. For the first time in years, I felt happy to be investing in myself to become more knowledgeable and capable. My first official project with CARE was to make school uniforms. It was an amazing feeling to see the beautiful results and the faces the young, happy children who received them.

The COVID-19 Pandemic Changed Everything

I have not seen my husband for almost a year now, because of the restrictions. My children are studying at home and it is hard for me because I do not have enough capacity to help them with their education. I am proud, though, of how strong they are and how they are helping one another. It has been life-changing for all of us. I no longer attend workshops nor visit my friends. My children are mentally tired because we do not leave our house at all. It has been a year. I was really happy when I received a call from CARE last month and they informed me that they want me to participate in a mask production activity. I felt like I am back to life again.

I have always dreamt of my children getting a good education, and living happy and successful lives. I want them to pursue their own dreams and live life to its fullest.