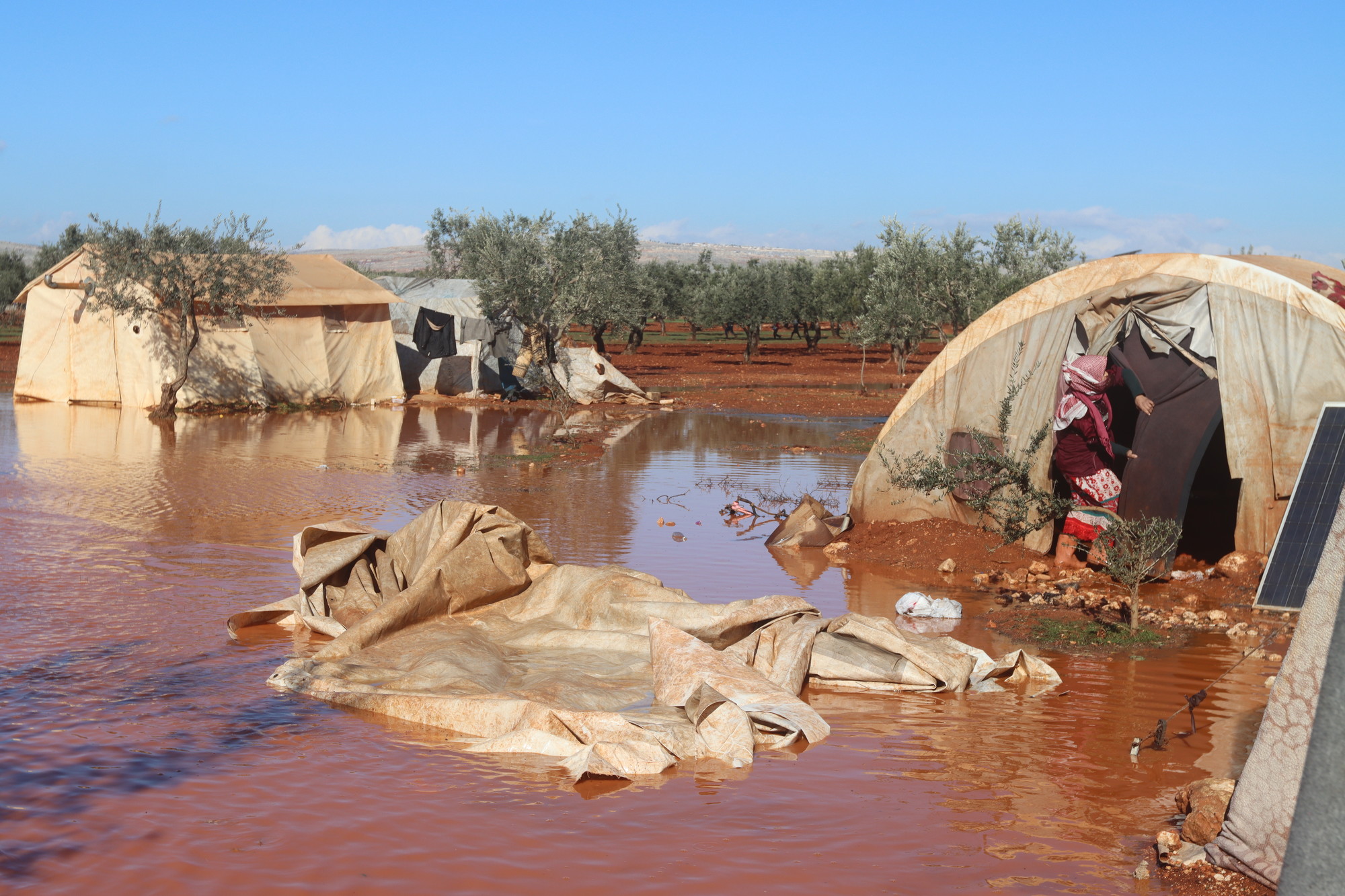 Flooding destroyed the tent where Zainab*, 60, lives with her grandchildren, destroying all of their belongings and rendering their home inhabitable. Photo: ©IYD/CARE

Flooding destroyed the tent where Zainab*, 60, lives with her grandchildren, destroying all of their belongings and rendering their home inhabitable. Photo: ©IYD/CARE

More than 22,000 displaced people have lost their temporary homes as heavy rains, flooding, and snow damages and destroys over 4,000 tents at displacement camps in northwest Syria. One child has died and three other people were injured as a result of the harsh weather conditions.

The storm has turned camps into lakes in some 87 sites for displaced people in northern Idlib and western Aleppo, causing loss of the only belongings people have left after nearly 10 years of conflict. Without heating, blankets and dry mattresses to sleep on, many had to seek shelter with family members, in public buildings or out in the open, as temperatures dropped below zero.

The storm has turned camps into lakes.

“Displacement has yet again caused misery for thousands of vulnerable populations in northwest Syria. With winter setting in, rain, and flooding has destroyed the homes of tens of thousands of people who have already been displaced over the course of nearly a decade of war. Tents, schools, and roads have been heavily impacted by the weather conditions,” says Sherine Ibrahim, CARE’s Country Director in Turkey.

“With inadequate shelter and increasing hunger for displaced Syrians in the northwest of the country, they are running out of coping strategies to keep themselves and their loved ones safe. Humanitarian organizations like CARE and our partners are rushing to provide emergency relief to those displaced but reaching those in need has been compounded by the flooding of access roads. We are also concerned that the situation might contribute to the rise in COVID infections and other diseases. There is an urgent need to provide additional funding that allows for infrastructure rehabilitation, as well as for more sustainable shelter solutions in locations that are safe. The time to act is now so that women, children and the elderly are not left out in the bitter cold.”

Humanitarian organizations like CARE are working around the clock to provide additional tents, essential winter items, and multi-purpose cash support to affected populations and to prepare people for extreme weather. CARE is also improving sites through graveling and raising the level of tents to help prevent flooding. Together with partners, CARE is distributing plastic sheets, blankets, mattresses, floor mats, kitchen sets, and baby packages to over 3,300 displaced Syrian families in 56 camps, whether they have lost their homes to the conflict or to the floods. 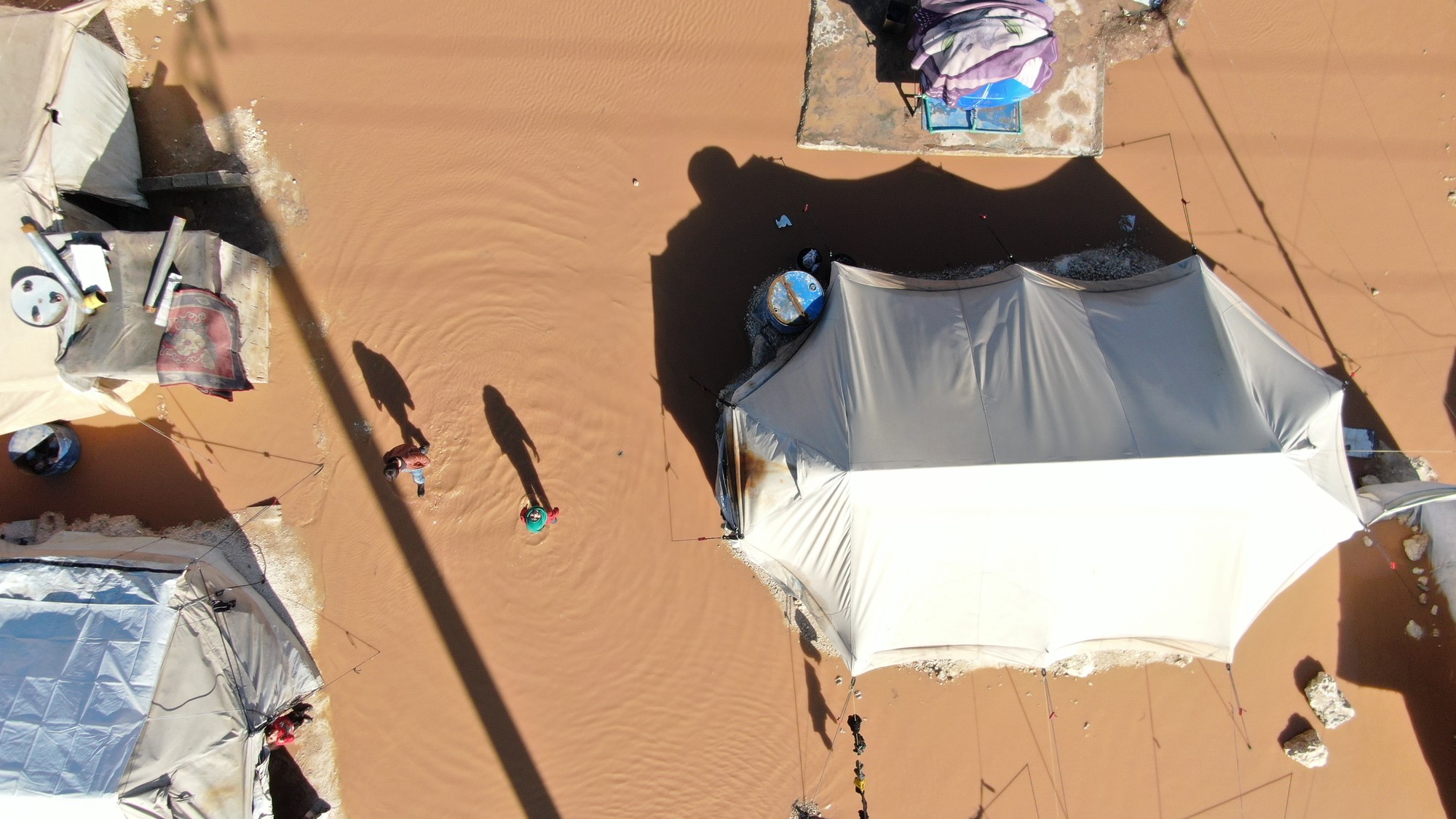 A girl and a boy stand next to their tent, their feet submerged in water, after heavy rainfall over five days in northwest Syria caused flooding in the camp. Nearly 600 families live in this camp in northern Idlib, only five kilometers from the Turkish border. 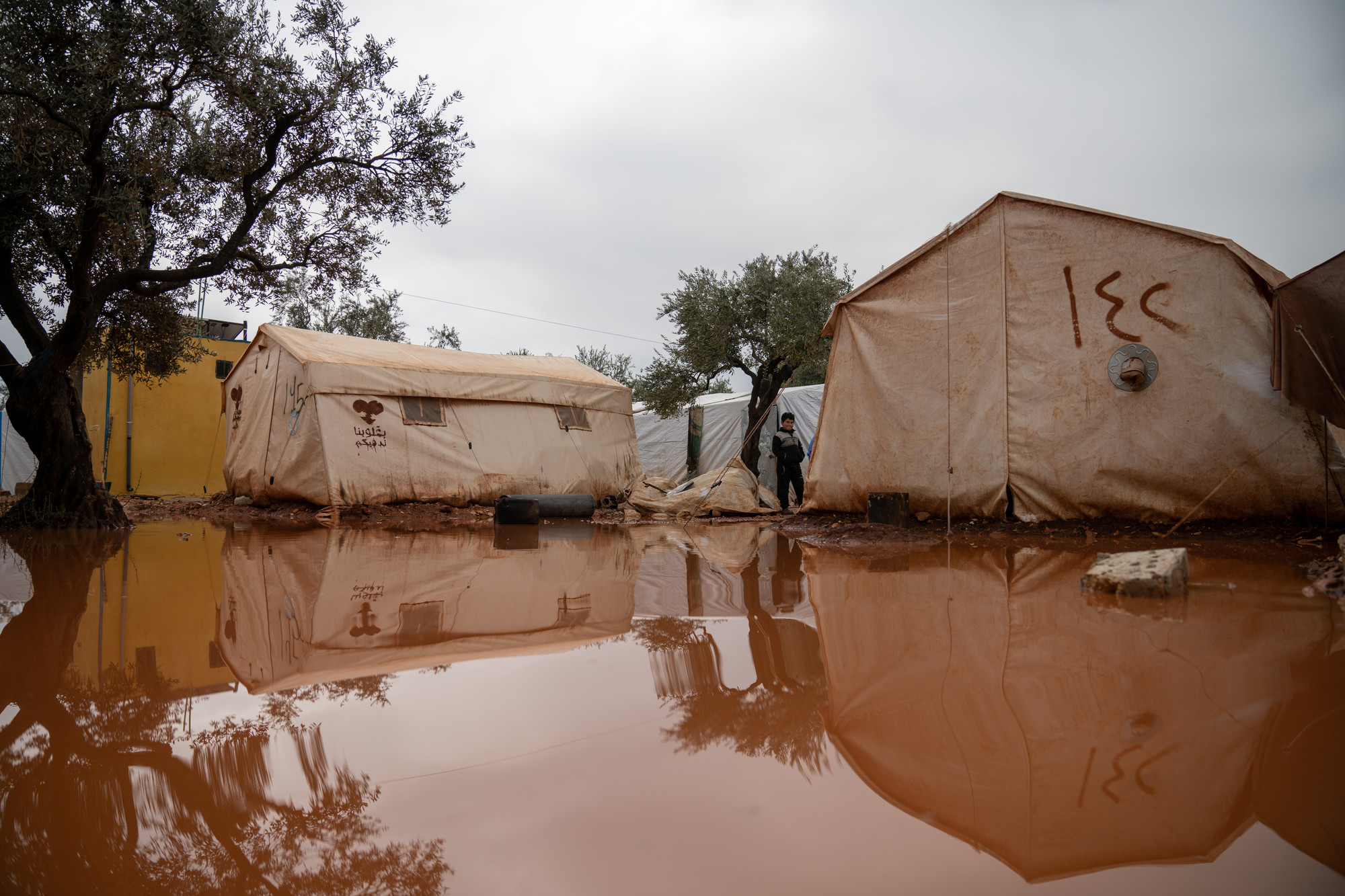 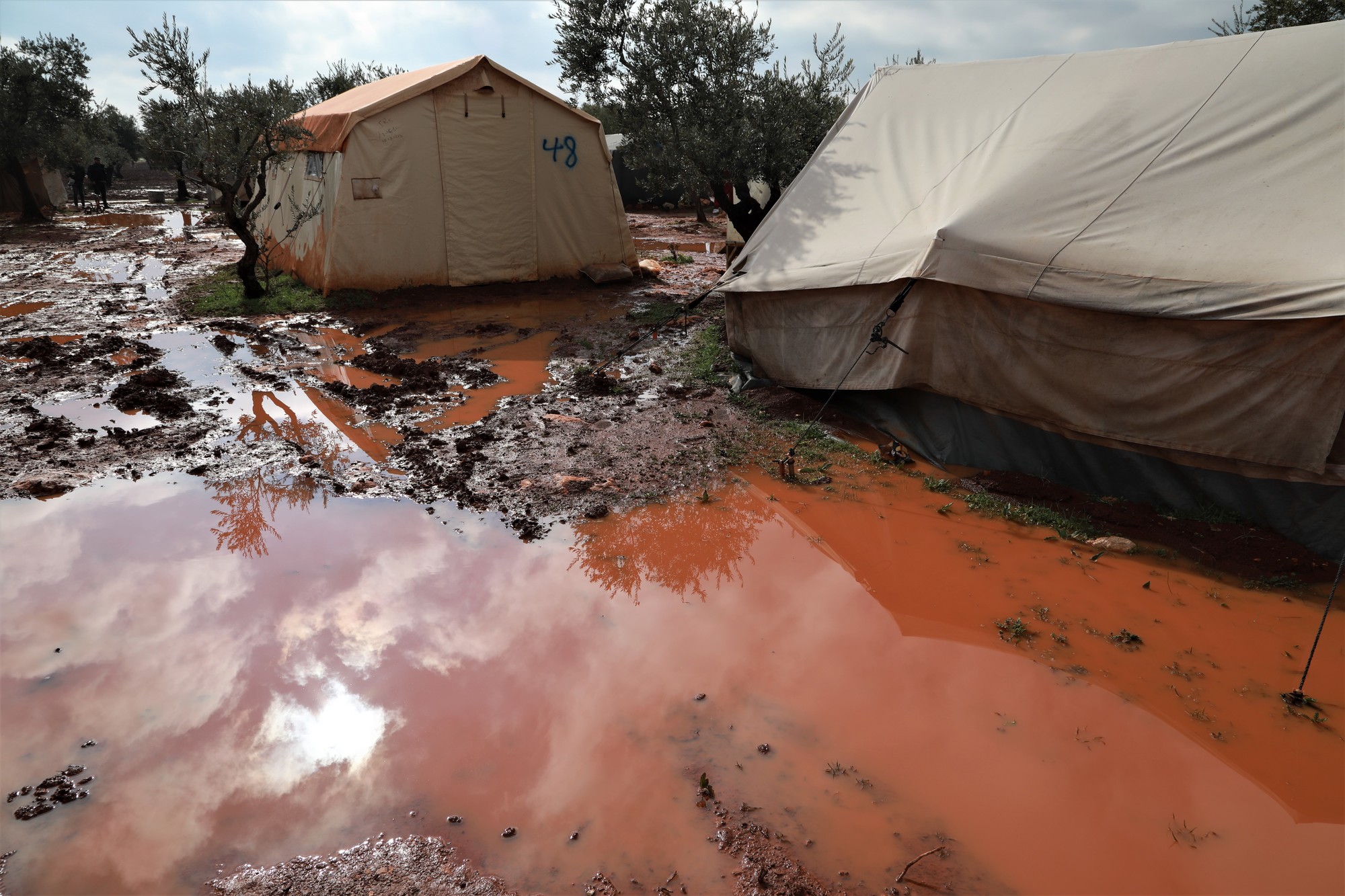 Heavy rains have turned the campgrounds into a swamp, submerging tents in water. Most camps for displaced people in northwest Syria are located in flat orchards, suitable for agriculture rather than construction. Due to the inability of displaced families to bear the cost of rent, the lack of job opportunities, unstable security situation, and multiple displacements, they have no choice but to settle in temporary makeshift tents in the area. The ability to repair tents is limited during the wet winter months and floods are likely to reoccur with renewed rainfall.

“The water has destroyed everything. There is nothing left.”

It is urgent to support Syrians who have endured nearly a decade of war by rehabilitating the infrastructure, including roads and campgrounds, in areas that house camps in order to prevent this tragedy from continuing. 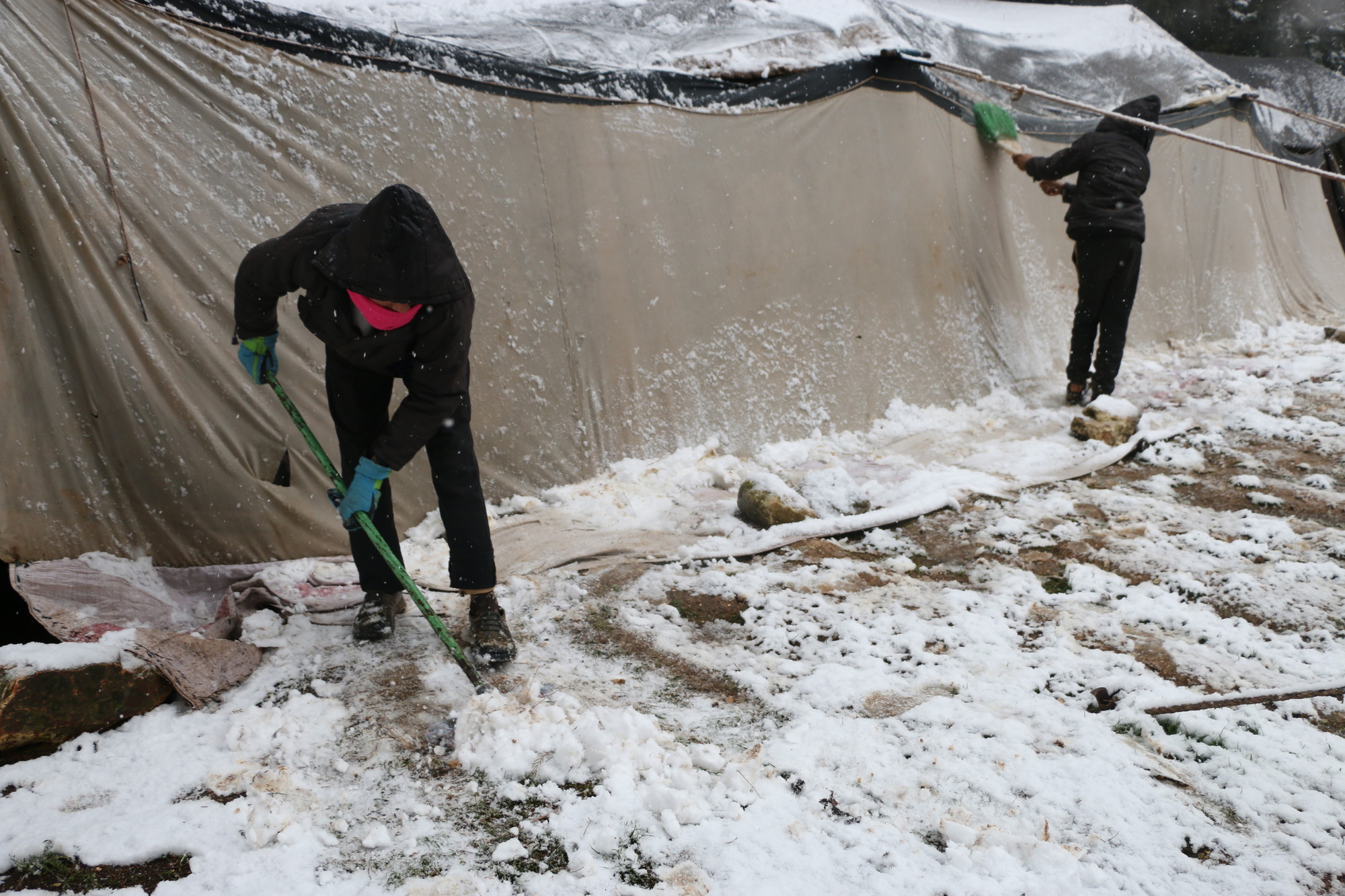 After snowfall in western Aleppo, children clean above their tent to prevent it from collapsing and push the snow away to stop water leaking inside. 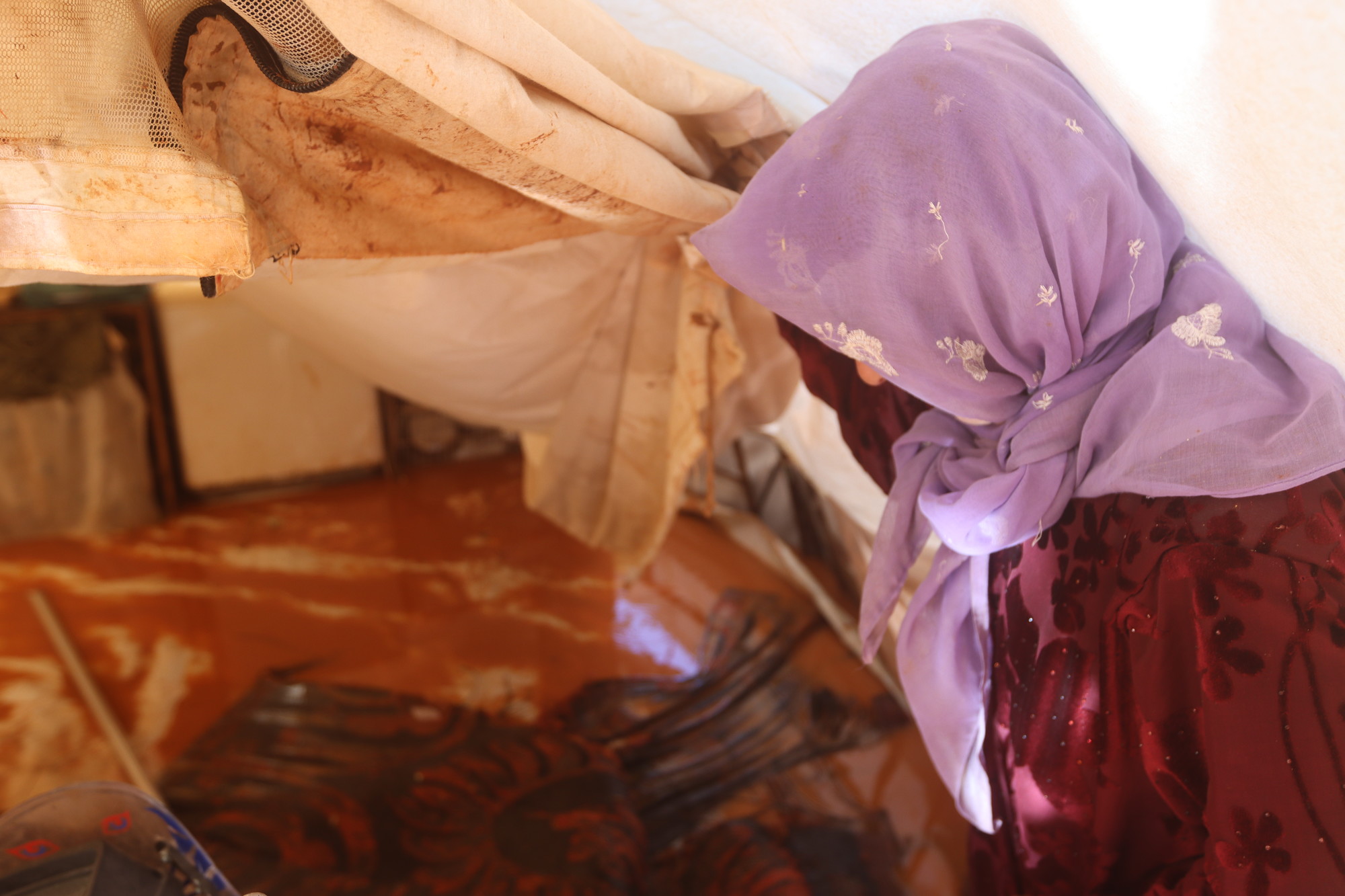 Zainab*, 60, looks at her flooded tent, after losing her home and all her possessions. She lives in one tent in a camp in northern Idlib with her grandchildren. “The water came into the tent where I live with my grandchildren, covering the ground. We cannot live in it now. Look at how our situation has become. We do not have blankets, food, or any other supplies. The water has destroyed everything. There is nothing left. These are difficult times.” 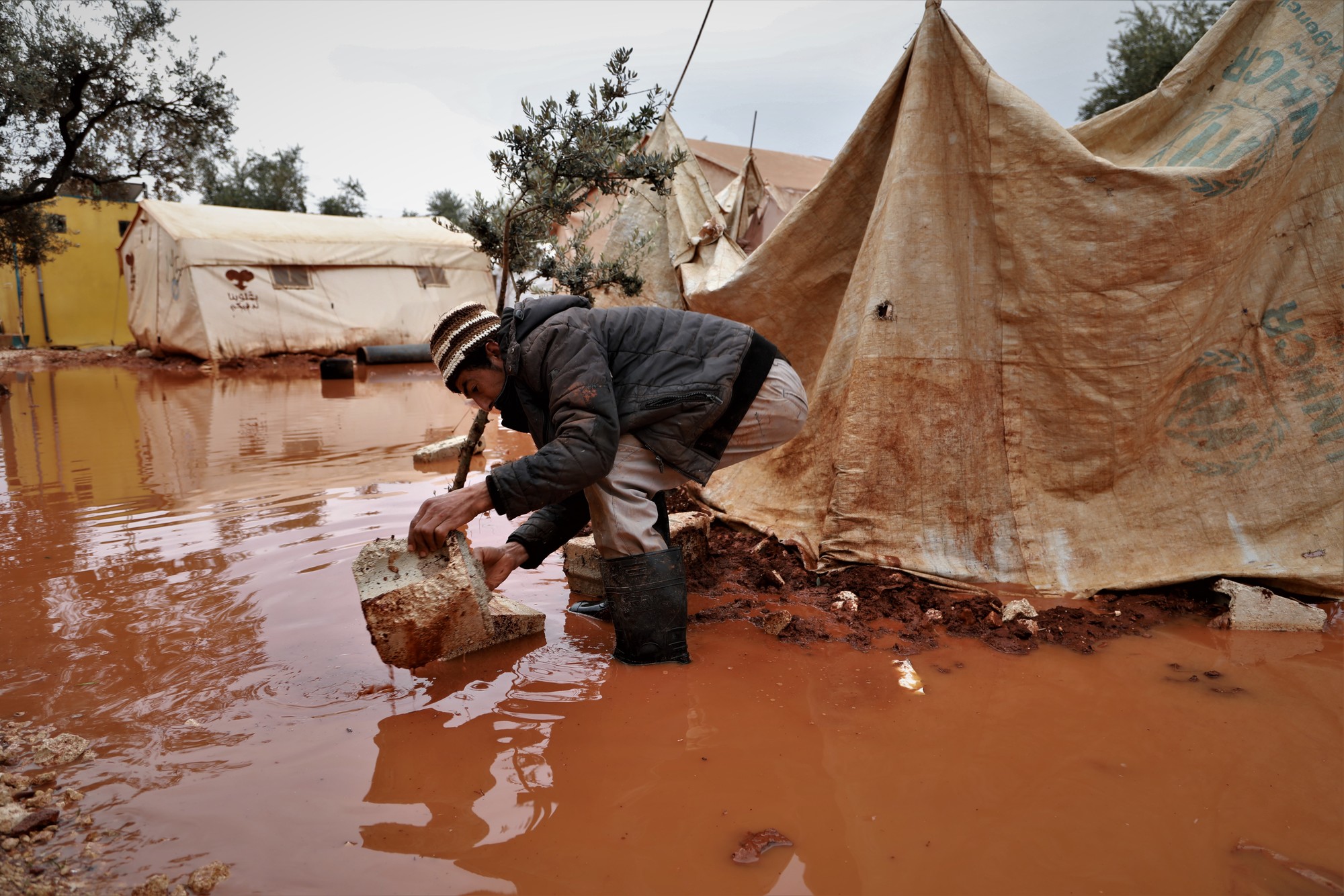 The tent that shelters Abu Ali* and his family has been submerged in water due to the heavy rains. He has no dry clothes, mattresses, or blankets to keep him and his children warm. Abu Ali was displaced to northern Idlib last year and now must leave his temporary home again due to the weather.

“It has been raining continuously for days. The camp has flooded and the tents and mattresses that we sleep on are covered with water. We cannot dry them because it is cloudy and there is no sun. My tent was flooded too, and I had to move some of my belongings to my neighbor’s tent. It’s wet and muddy everywhere and my children are cold. We have not had drinking water for more than a week, because there is no way to deliver water at the moment.

“We ask those concerned to look at the situation of these camps. The roads in the camp need gravelling, so water can be delivered, and we need anything that can help keep us warm. The children are waking up at night crying because they are so cold. All our clothes got wet in the rain. We have pleaded for years and we hope that someone will hear us this time and improve the situation in the camp.”

*Names have been changed

Read More
In Syria, 10-year-old Maram is focused on staying in school and becoming a teacher

As the oldest girl in a household with 22 children, Maram is expected to balance the responsibilities of school and of being a caretaker for her young siblings and cousins.

Help educate girls and adolescents around the world by providing tools for safe and effective learning environments.