Somalia drought: "Climate change has been reality for us for a long time." - CARE

Somalia drought: "Climate change has been reality for us for a long time." 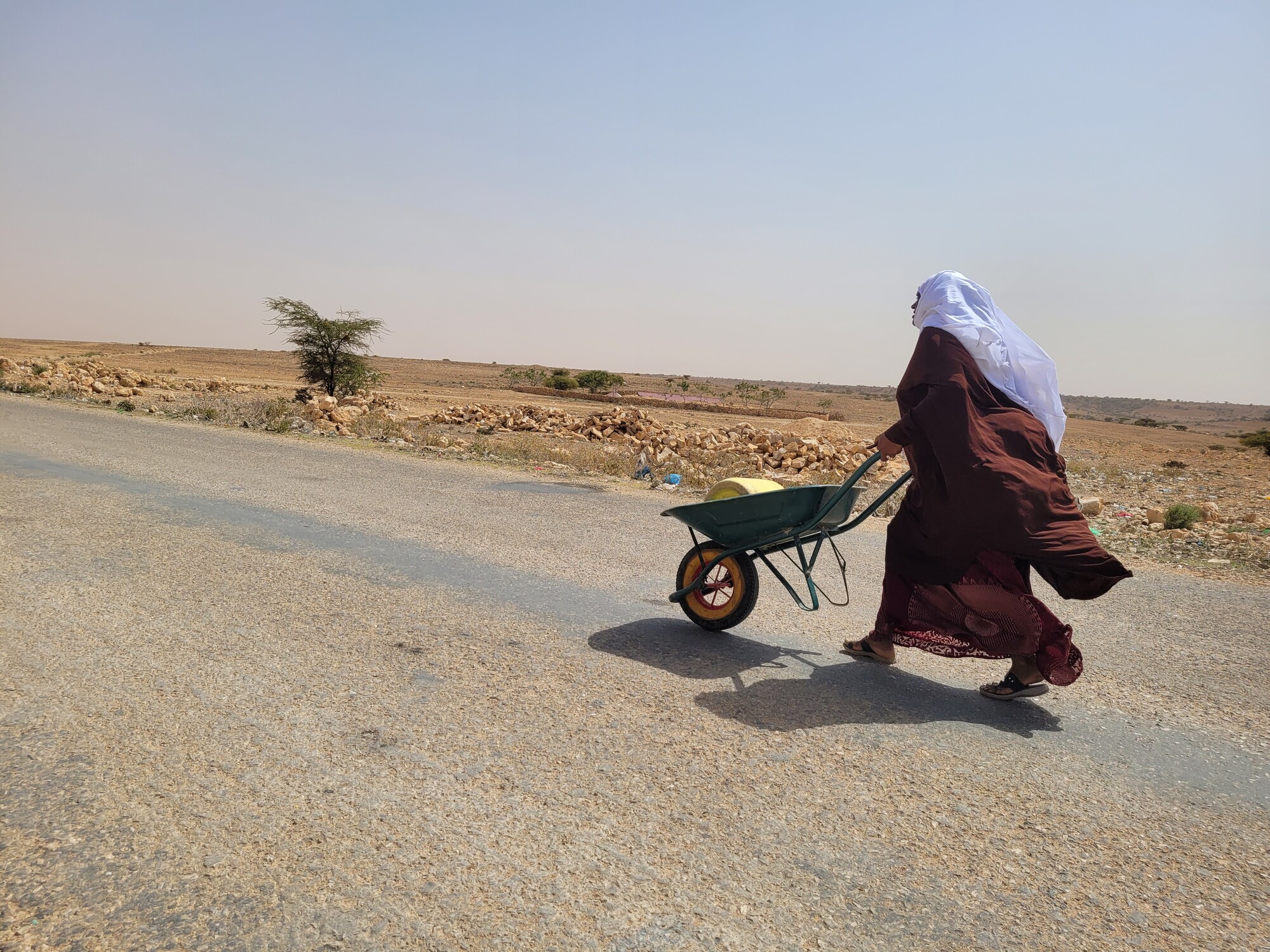 The global hunger crisis is worsening. While the war in Ukraine is causing food and gas prices to rise around the world, the effects of climate change are also becoming increasingly apparent – especially in countries of the Global South such as Somalia in East Africa.

Animals are dying. Herds of goats are starving and dying of thirst. Carcasses are lying by the side of the road. For two years, it has not rained enough in Somalia. This year, the rainy season from March to June has failed to come again. The fields are drying up, the water tanks in the villages are empty, and the cattle herders are losing their only source of income. Currently, 7.7 million people depend on humanitarian assistance in Somalia. 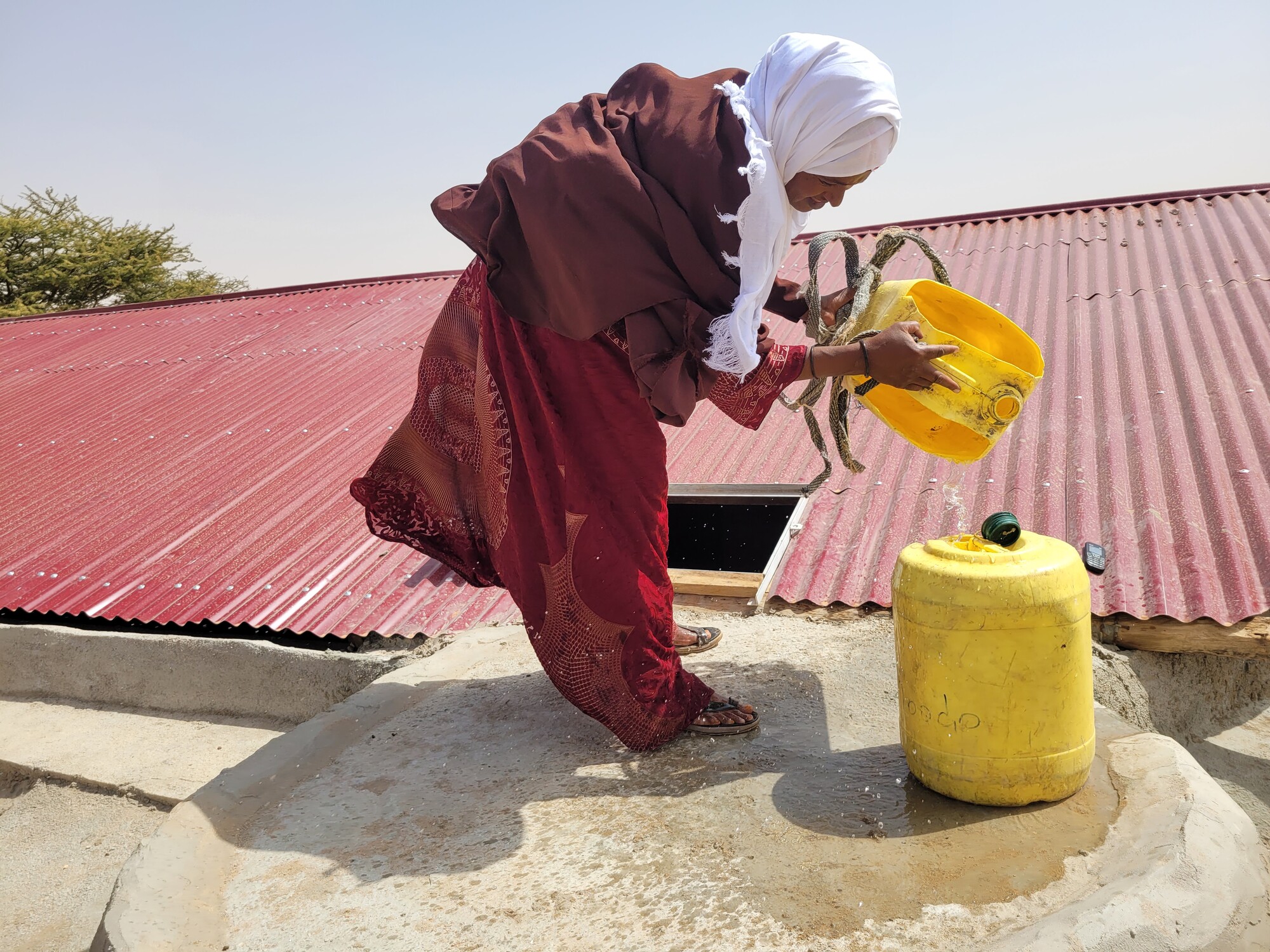 All photos by Sarah Easter/CARE

No water in sight

In one of the numerous villages, there is a large water tank that has been rehabilitated by CARE.

“Two years ago, the tank was filled with rainwater for the last time. For this to happen, is has to rain for three consecutive days. If it doesn’t rain, once-a-week a water delivery has to come from the next town,” Hodo Mohamad Ali, 32, mother of eight, says.

She uses a wheelbarrow to move a large water canister across the dry ground to the water tank. As she does so, the wind whirls up the sand. One water delivery can supply about 2,000 people for a week; animals and fields receive nothing. 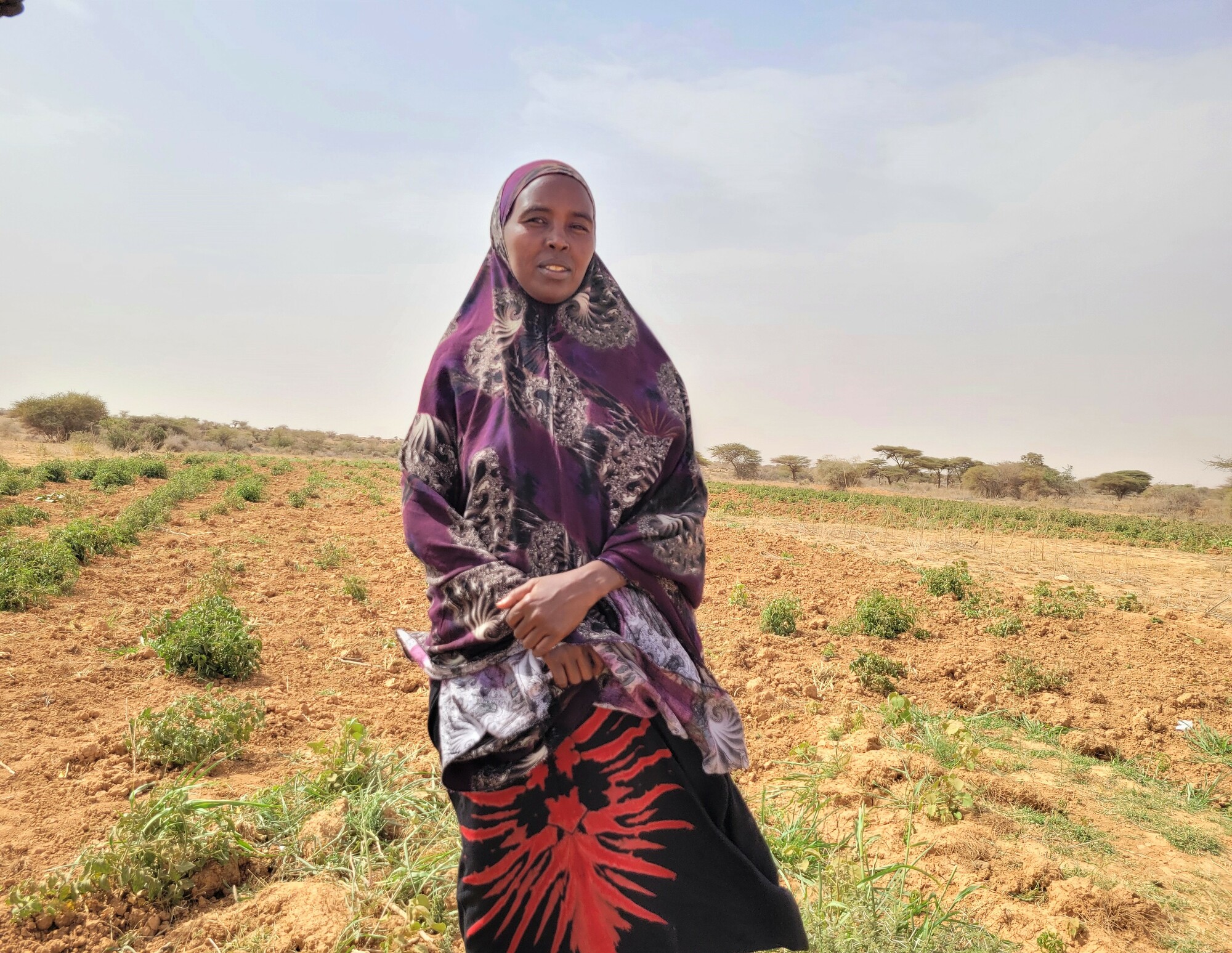 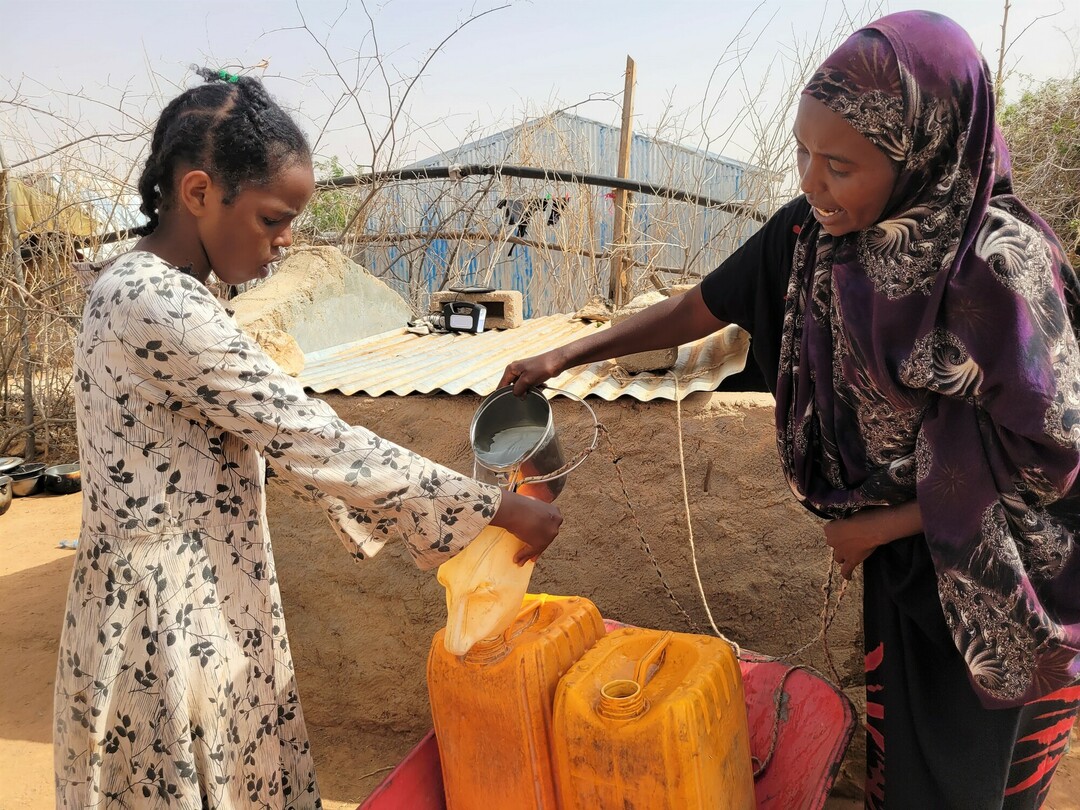 The fields are drying up

“I am a farmer. My life and that of my family depends on the harvest. Last year I did not have any crops. I do not expect my tomato field to yield anything this year either, there is just not enough water,” says Asha Mohammed, 35, standing in her withered field and pulling out weeds. She is trying to save what can be saved. “The weeds are taking away the valuable nutrients from the tomatoes.”

The only source of income for people in these villages are their fields and livestock. 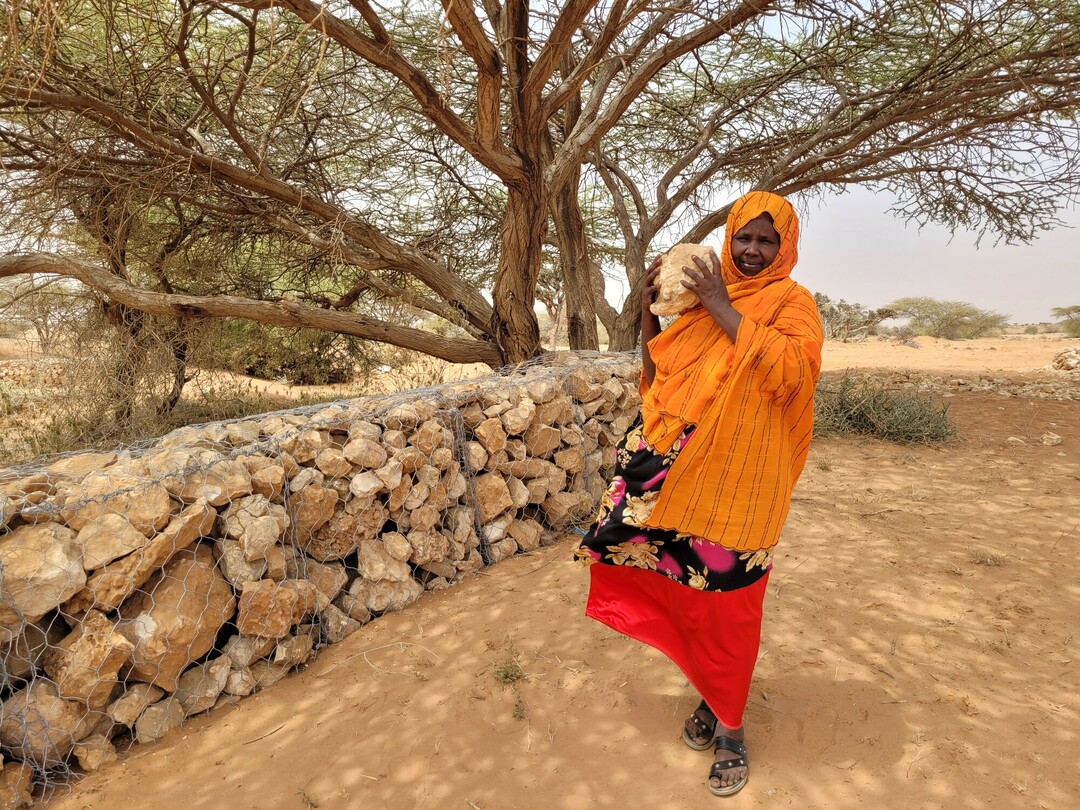 The drought is hard on the people. However, at the same time, during the rainy season there is a threat of erosion which can be caused by sudden heavy rains. Because when it rains in Somalia, it rains a lot.

Outside the village, in the middle of sand and dunes, the villagers have built a barrier made out of wire and large stones. This barrier is intended to prevent possible flash floods and the destruction that comes with them. When the flood comes and water accumulates in front of the barrier, it serves not only as protection for the people but also as a waterhole for cattle. The villagers are paid by CARE for their work such as building these barriers. Women also help.

“I am equal to men and do the same work as them,” says Amina Saleban, 43, mother of ten.

“Often, we don’t have anything to drink. As soon as we get our salary, we order water – our most important good. Climate change has been a reality for us for a long time,” Amina continues. She used to own a large herd of goats. She sold goat meat and milk. Now there are only five goats left.

Displaced from their homes 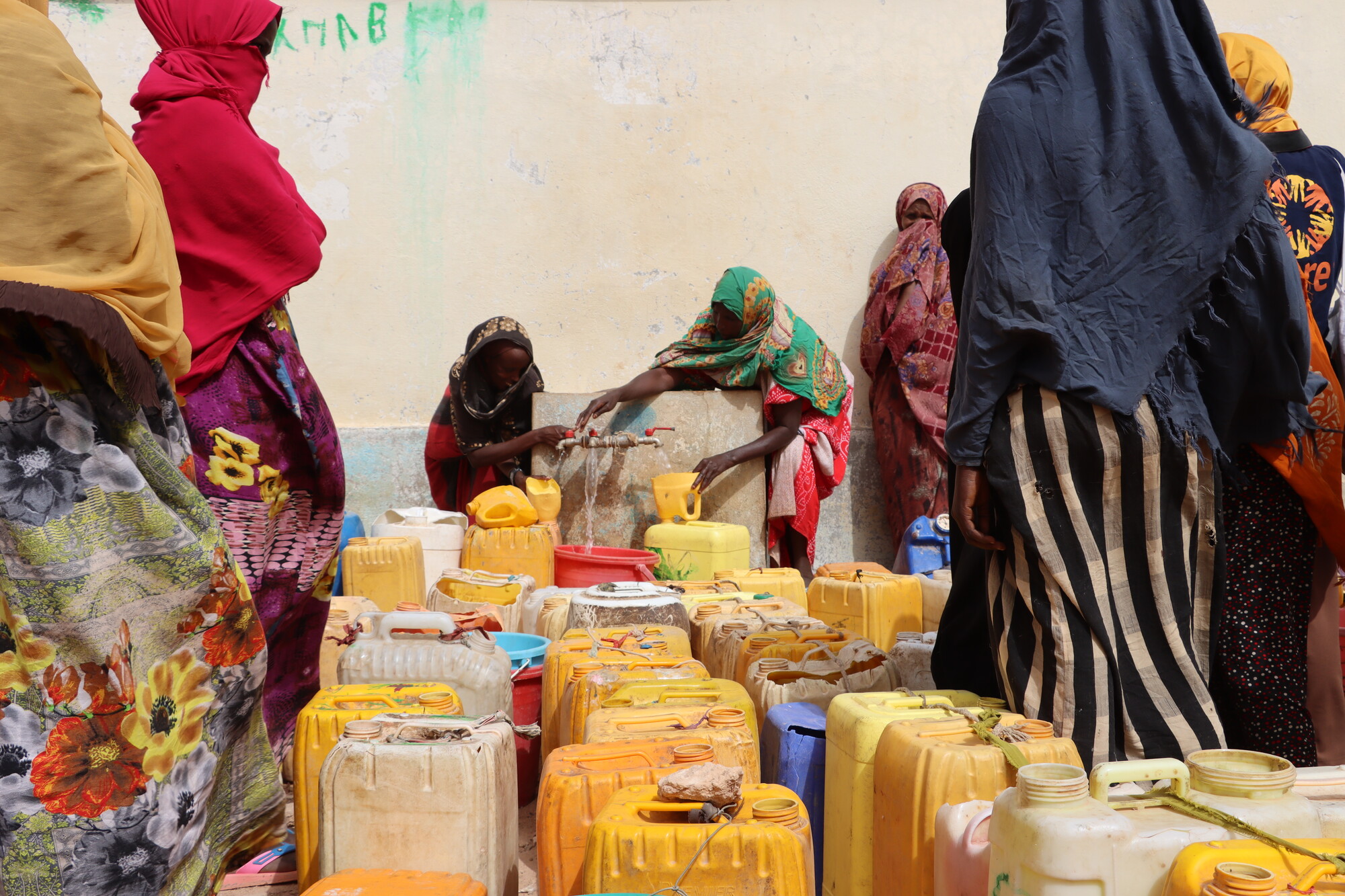 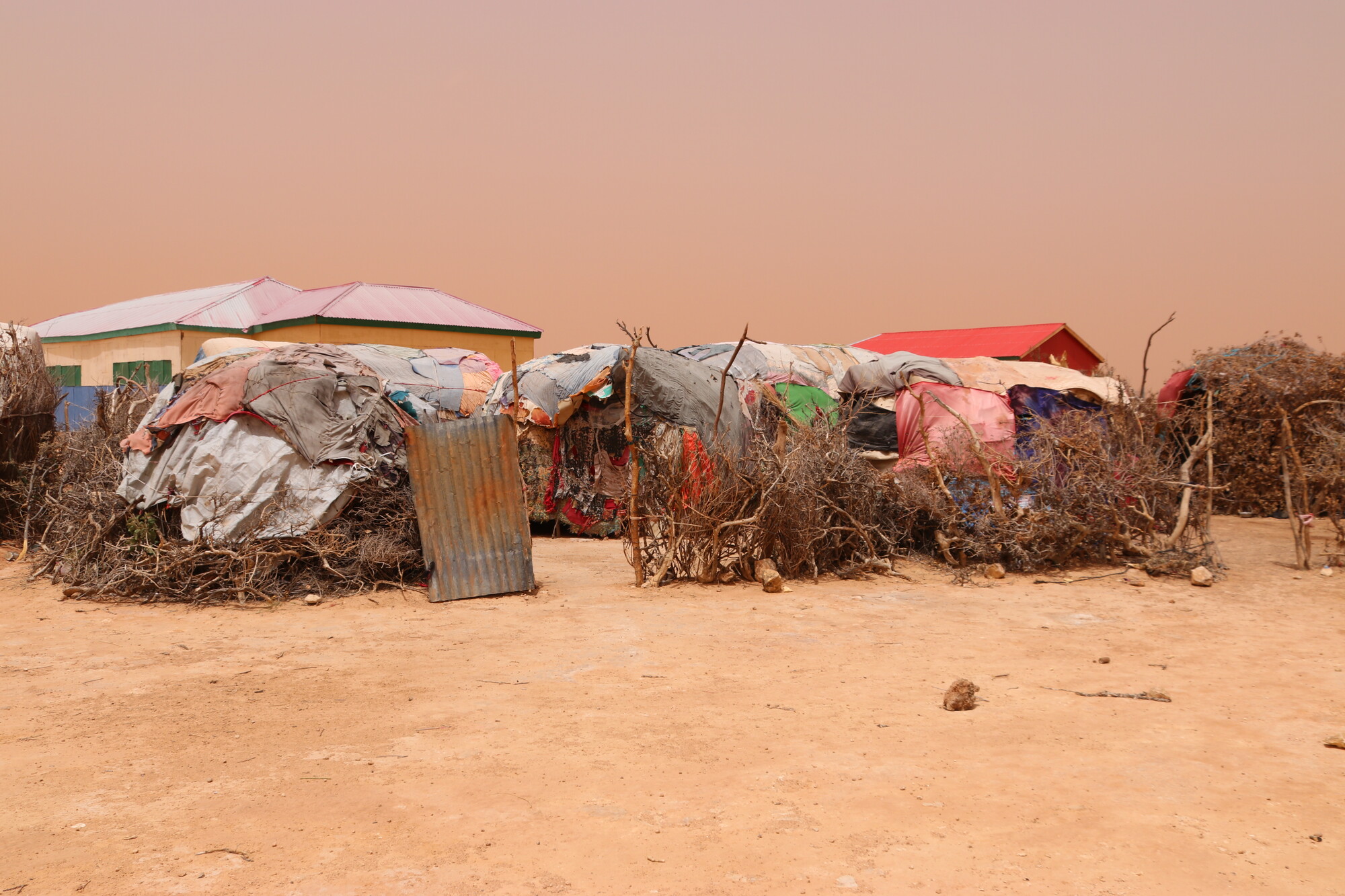 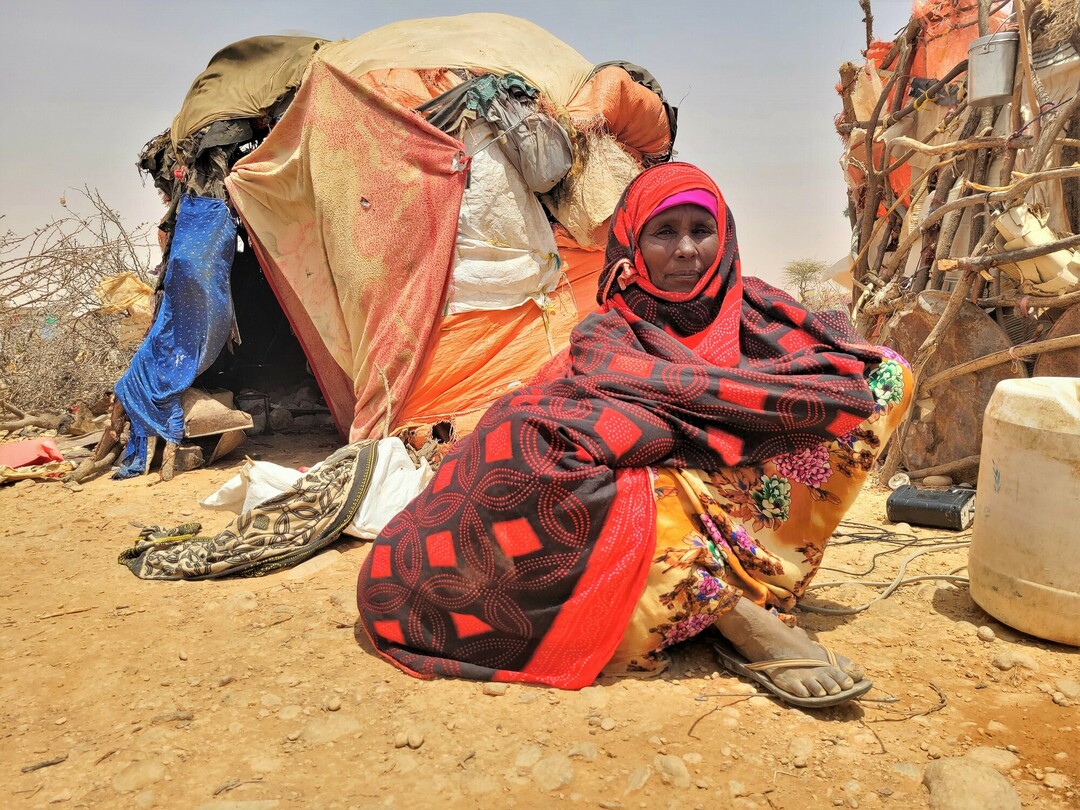 Due to the lack of water, lower crop yields and lack of income, more than 800,000 people have already had to flee within their homeland, most of them women and children. Many husbands and sons remain behind, trying to save their livestock and fields. At a camp for displaced people, up to four new families arrive per day seeking water and other assistance.

Other families are trying to find water and food outside of the camps and towns.

“All my 300 goats have died of thirst. I usually live about 100 kilometres away from here. There is no water there anymore, so that’s why I came here,” says Aisha Mohammed, who lives in a hut outside a village. She is about 70 years old.

“I don’t remember how old I am; the drought has affected me mentally and physically so much that I cannot remember.”

Aisha continues: “Most days we don’t get anything to eat, on other days we eat one meal. We have nothing at all, just some water.”

Due to the drought and lack of water, many people are hungry. They have lost their sources of income because they can no longer cultivate their fields. Now, many people have to buy their own food, often ordering food rations from the nearest town.

In addition, there are transport costs that can hardly be paid with the little money they have. Many villagers have to buy their food as a loan. The list of their debts is getting longer and longer, and the circulation of cash has been disrupted. Supply and demand regulate the prices. The cost of food has risen sharply.

“For our money, we get less food every month,” explains Ardo Dhunkel, 60. She runs a small store where she sells groceries and other daily necessities. “Before, a monthly ration of rice, sugar and wheat used to cost me $90 each, now I pay $130.” In addition to the war in Ukraine and the related global inflation, climate change is also driving up prices. 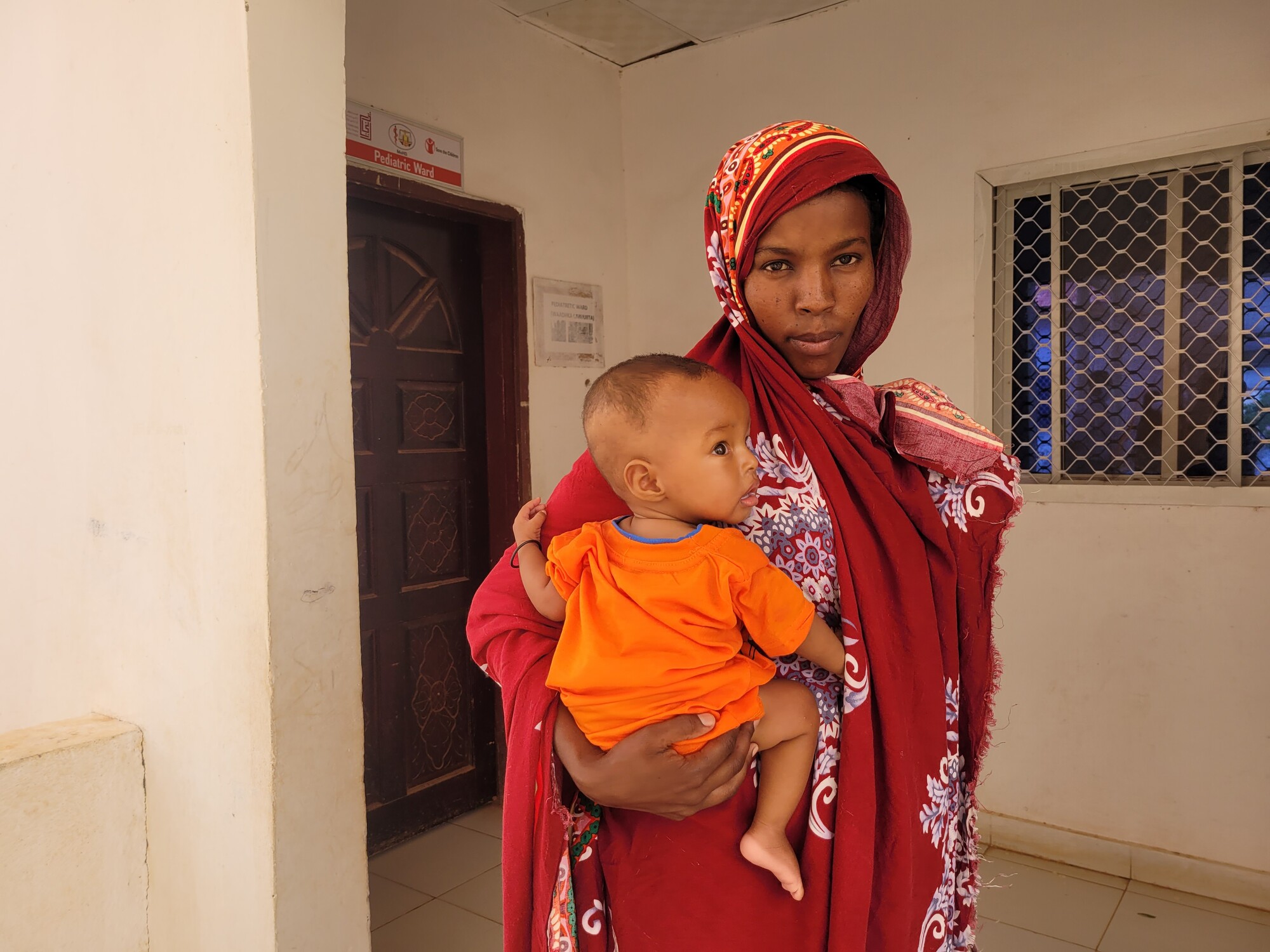 The struggle for food

Children suffer the most from the current situation in Somalia, with more than 1.4 million of them severely malnourished. Every day, more mothers and their malnourished children come to one of CARE’s 56 health centers seeking help. Often, these are the only place for mothers and pregnant women to go.

The severely malnourished children are usually very weak. They are more susceptible to diseases such as tuberculosis or malaria. The course of the diseases often is severe. Especially in childhood, malnutrition can reduce physical and mental development. The respiratory muscles become weaker, the heart beats less. Many of the malnourished children require immediate emergency care.

Abdirahman is eight months old. When he arrived at one of CARE’s health centres, he weighed 11.5 pounds – at least 6.5 pounds too few for his age and size. His parents are former cattle herders. His father has no work. On days when he finds a day job in construction, the family can eat.

At the CARE health centre, Abdirahman receives a special milk that helps him to gain weight. Within three days, he has gained 7 ounces.

Due to the severe drought, not only is there a lack of water and food, but people are also worried about their survival and their prospects.

This is how CARE helps people affected by the drought in Somalia:

In addition to cash assistance and small savings groups, CARE is helping by rehabilitating and constructing water tanks. In health centers, CARE cares for malnourished children, mothers, and pregnant women. In camps for displaced people, CARE supports families with cash, the construction of schools and scholarships for school materials.