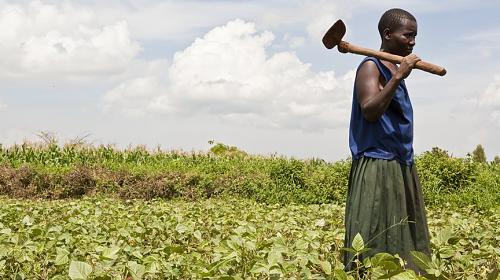 Josephine Onyango is member of Atema Savings Group, which is a group of local farmers in Bondo, Kenya that assist CARE in cultivating CARE's demonstration fields. The purpose of the CARE demonstration fields is to help the farmers experiment with better f

WASHINGTON, DC (April 13, 2016) — The global poverty-fighting organization CARE celebrates the passage today of the Global Food Security Act (H.R. 1567) by the U.S. House of Representatives and applauds the bill’s progress as the companion bill is considered in the Senate. The bill is an important step forward in the fight to end hunger and build just and sustainable food systems.

One in 9 people in the world suffers from chronic hunger, and poor nutrition causes nearly half the deaths of children younger than 5 — 3.1 million children each year. But if women farmers had the same access to productive resources as men, they could increase yields on their farms by 20 percent to 30 percent – and the number of hungry people in the world would drop by up to 150 million.

“Through an effective, transparent and sustainable approach, this bill will ensure that smallholder farmers – and women in particular – are empowered to feed their families and their own communities,” said David Ray, vice president for Advocacy at CARE. “It’s encouraging to see it passing through the House, and we urge the two chambers to work together to advance this important legislation and get it to the President’s desk.”

The Global Food Security Act will improve U.S. programs, including the Feed the Future initiative, in order to support sustainable and equitable agricultural development, reduce global hunger and improve nutrition.

“CARE applauds the House’s passage of the bill, and we call on the Senate to finish their consideration of their companion bill and for both chambers to work together. It is time to send this to the President’s desk,” said Ray.