CARE Congratulates Kerry on the Senate's Confirmation of His Nomination - CARE

CARE Congratulates Kerry on the Senate's Confirmation of His Nomination 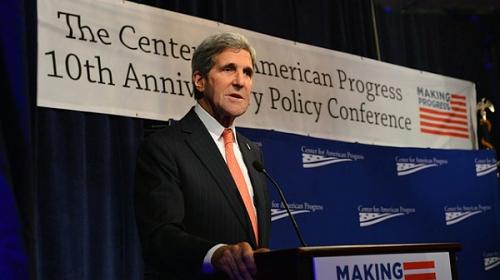 WASHINGTON, D.C. (January 29, 2013) – CARE congratulates Sen. John Kerry (D-Mass) on the Senate’s confirmation of his nomination as Secretary of State. For decades, Kerry has shown devotion to development issues and foreign policy, including his time working for CARE in 1972 as a fundraiser.

“Kerry’s extensive foreign policy experience will be a tremendous asset as our next Secretary of State,” said Helene D. Gayle, president and CEO of CARE. “We hope he will continue his efforts to address the numerous challenges affecting the world’s poor, especially girls and women. He has been a tireless advocate for smart, effective investments in foreign aid, and he understands the disproportionate impact that environmental threats such as climate change have on the most vulnerable populations.”

Over the last four years, Secretary of State Hillary Clinton has been a champion for women and girls globally. She has brought critical attention to breaking the cycle of poverty and oppression that keeps millions of women and children from reaching their full potential. Clinton’s last day on the job is Friday, according to multiple media outlets.

CARE urges Kerry to continue prioritizing investment in women and girls around the world; CARE has been on the forefront of working with the State Department on issues such as gender-based violence, child marriage and girl’s education and empowerment, food security and global health.

As a result of U.S. global assistance over the last 60 years, there have been significant improvements in the lives of the poor, including women and girls. These investments have led to a decline in maternal and child mortality rates. Literacy rates have increased and economic opportunities for women have expanded in the developing world.

Despite this progress, the U.S. foreign aid budget is at risk of deep and disproportionate cuts. In a time of uncertainty, CARE urges Kerry to protect the foreign aid budget, which represents just one percent of the federal budget, as a critical pillar of his agenda. The famine in the Sahel region and recent upheaval in the Democratic Republic of the Congo and Syria highlights the need for continued U.S. support in both long term development and emergency relief.