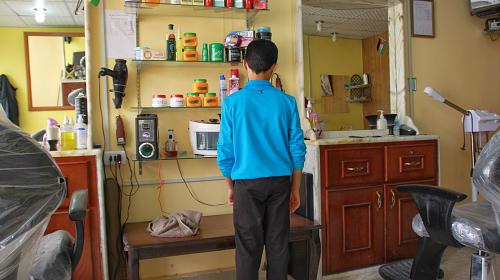 Aboud, 12, fled with his family to Mafraq, Jordan six weeks ago. Instead of attending school, he works in a barber shop from 9:00 in the morning until 10:30 at night, sweeping the floor and cleaning scissors. His 13-year-old brother must work as well to help make ends meet.

AMMAN (Nov. 15, 2013) — Ahead of International Children’s Day on November 20, CARE voices our concern about Syrian refugee families becoming increasingly reliant on child labor to meet basic survival needs such as food and rent. According to the latest Jordanian government estimates around 30,000 Syrian children are currently working in Jordan. The International Labor Organization warns that the number of child laborers in Jordan may be even higher. In Lebanon, at least 50,000 Syrian refugee children need to work to support their families.

“Many of the families we register in our refugee centers every day fled without male family members because husbands, fathers have died or are still in Syria. Unfortunately, in a lot of the refugee families we register, one of the young sons becomes the family’s breadwinner to make ends meet,” says Salam Kanaan, CARE Jordan Country Director.

The longer the refugee families stay in neighboring countries the more financially vulnerable they become. “Families cannot depend on their savings anymore and there is increased pressure for the more than one million refugee children to find work,” Kannan explains. “A lot of families have fled months or years ago. They become more and more destitute and see no other option but to send their children to work to generate an income for the family.”

“Being pulled into the workforce usually means being pulled out of school,” says Kanaan. “Hundreds of thousands of school children have lost up to three years of education already. If we do not act immediately, an entire generation of children will miss out on an education, which is the most critical investment for Syria’s future.”

In Jordan, no more than one-third of the approximately 150,000 Syrian school-aged children are currently attending school. In neighboring Lebanon – the country that hosts the highest number of refugees – estimates show that the enrollment rates of Syrian children are under 10 percent.

“The social and psychological impact of war on children is already immense. Working long hours under harsh conditions will add to the distress,” says Kanaan.

It is illegal to work or employ anyone under the age of 16 in Jordan, and many children find themselves in deplorable and alarmingly exploitative situations. They often are paid below the minimum wage, working long hours without appropriate safety equipment.

“I talked to a 13-year-old boy who has to work 15 hours every day. Similar to many others, he had to accept a wage as little as two dollars a day, and sometimes his boss does not pay him at all. His hands are tied because he does not have a work permit and he cannot lose his job [because] his family would have no source of income,” says Kanaan.

CARE calls on the international community to scale up its support for Syrian families so children can get out of the labor market and back into the classroom.

“If the financial support for Syrian refugees remains as limited as it is now, the percentage of children working will rise even higher,” says Kanaan. “Unless refugees obtain the correct work permit, parents who are found working may face legal action. If support is not being provided refugee families do not have another option.”

As of today, CARE has secured less than 25 percent of the $100 million required for our planned humanitarian assistance in the region.

CARE is providing lifesaving services to Syrian refugees in Jordan and Lebanon and to people affected by the crisis in Syria. In Jordan, CARE has helped more than 150,000 Syrian refugees, providing financial support so that refugee families are stable enough to send their children to school and not to work. CARE also tries to raise awareness among families about the risk of exploitation and abuse. We are creating family centers where refugee children can play with other children, read books and be in an environment where they can feel like children again.

Founded in 1945, CARE is a leading humanitarian organization fighting global poverty and providing lifesaving assistance in emergencies. CARE places special focus on working alongside poor girls and women because, equipped with the proper resources, they have the power to help lift whole families and entire communities out of poverty. CARE has been working in Jordan since 1948. CARE Jordan has extensive experience working with refugees, providing livelihood training and opportunities, emergency cash assistance, information sharing and psychosocial support to Iraqi refugees since 2003.

Early childhood (from birth to 6 years old) is the most important stage of a child’s life.

PTLA, a three-year public-private partnership built on a broad base of collaboration between CARE, USAID, civil society organizations (...

Realizing a Dream Helps to Feed Her Family

When CARE opened the first-ever girls’ school in her Afghani village, it kindled the dreams of 13-year-old Malalai.

As we celebrate International Day of the Girl, we can’t help remind ourselves of our own childhood.