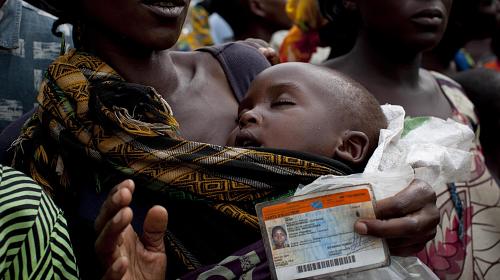 “Suffering in Silence” report highlights the major humanitarian crises that made the fewest headlines last year, based on analysis of media coverage around the world

GENEVA (Jan. 22, 2018) — Today the international aid organization CARE launched a new report highlighting the ten most under-reported humanitarian crises of 2017. Titled “Suffering in Silence,” the report found that the humanitarian situation in North Korea received the least media attention globally of any crisis affecting at least 1 million people. With so much media focus on nuclear brinkmanship, the hunger crisis in North Korea was largely overlooked.

Africa’s largest humanitarian crisis – in the Lake Chad Basin – made the list, as did the fast-growing conflict in the Democratic Republic of the Congo, where the number of people requiring humanitarian assistance nearly doubled to 8 million in 2017. Other crises that rarely made headlines last year were Eritrea, Burundi, Sudan, Central African Republic, Mali, Vietnam and Peru.

“We all know that a single photo can make the world turn its attention to an issue. But the people in the countries featured in CARE’s report are far away from the cameras and microphones of this world,” said Laurie Lee, CARE International’s Interim Secretary General. “These crises might not make the media headlines, but that does not mean we can forget about them.”

Using the media monitoring services of Meltwater Group, CARE analyzed global online news coverage (in English, French and German) of all 39 natural or manmade disasters affecting at least 1 million people in 2017, then listed the 10 disasters receiving the least coverage.

The lack of attention is important because there is a direct link between media coverage and money donated for humanitarian aid. “The media play a vital role in drawing public attention to forgotten and neglected crises,” said Filippo Grandi, UN High Commissioner for Refugees. “Despite the tragic consequences for the lives of millions affected by conflict and displacement, the gap between humanitarian needs and available funding continues to exist. The outlook for 2018 is grim, as the political will to resolve conflicts and address the root causes that are driving them – poor governance, growing impoverishment, inequality and climate change, is weak. Political leaders must step up and shoulder responsibility for tackling today’s forgotten crises.”

Heba Aly, director of IRIN News, concurred. “The countries on this list are exactly the kinds of places we focus our attention as a non-profit news organization that reports about humanitarian crises,” Aly said. “But as this report points out, this kind of work is difficult to finance and increasingly rare. It’s time we start recognizing that quality journalism about crises is part of the solution.”

The UN’s Global Humanitarian Overview for 2018 calls for $22.5 billion to help almost 91 million of the 135 million people in urgent need. Media attention can help focus public support on these people trapped in crisis. Among the recommendations outlined in the report: Working with local freelancers and NGOs to receive up-to-date materials; pooling money for reporting in remote areas; and greater NGO investment in communications in emergencies.

Media contact: Contact Nicole Harris at 404-735-0871 or nharris@care.org to obtain photos and video b-roll or interview CARE humanitarian experts in many of the countries on the list.

To see the report: Go to www.care-international.org/suffering-in-silence

Note to editors: Using the media monitoring services of Meltwater Group, CARE analyzed those natural disasters or conflicts that received the least media attention in 2017. More than 1.2 million global online sources were monitored in English, French and German. To filter according to scale, we chose countries in which at least one million people were affected by natural or man-made disasters. The result is a list of almost 40 crises that were analysed. Our report features the ten crises which received the fewest media attention, meaning the least amount of online media coverage. This is the second time that CARE publishes the report “Suffering in Silence”. In 2016, the most underreported crisis was Eritrea, followed by Burundi and Madagascar. All in all, seven countries on the list of 2016 also made it to the Top Ten in 2017. This yearly analysis serves as a reminder and appeal to make room both in media and political spheres for those who suffer in silence.

About CARE: Founded in 1945, CARE is a leading humanitarian organization working around the globe to save lives, defeat poverty and achieve social justice. CARE places a special focus on working alongside poor girls and women because, equipped with the proper resources, they have the power to life whole families and entire communities out of poverty. Last year, CARE work in 93 countries and reached more than 63 million people. To learn more, visit www.care.org.