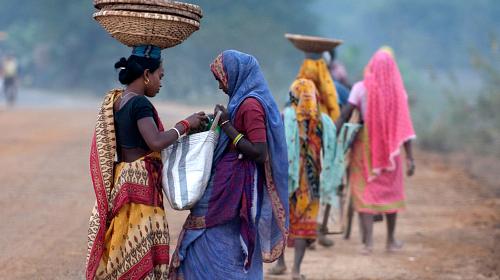 Unidentified young women prepare to head home after a day of working as road laborers in Orissa, India. CARE works with both women and men in India to prevent gender-based violence and discrimination, foster attitudes and behaviors that discourage violence against women and educate woman about their rights.

CARE shares the anger and grief of our sisters and brothers in India over the recent and widely-reported brutal gang rape and death of a 23-year-old woman in the capital city of Delhi.

We join hundreds of thousands of Indians calling for justice in this case and addressing the deeper underlying causes of abuse and injustice. We support their efforts to seize this moment to build on and strengthen strong policies, procedures and mechanisms in India to change the long-standing and deep-seated ways of thinking that make daily acts of violence and discrimination against women and girls acceptable.

For millions of women around the world, violence, discrimination and restrictions of their basic freedoms are a daily reality. We believe that ending such acts is not only the right thing to do, it is also critical to the effort to eliminate extreme poverty and build a safer, better world for us all. Societies cannot prosper when half of their people are not allowed to fulfill their potential as human beings and fully contribute to their development. CARE works around the world to better enable women and girls and indeed all poor and marginalized people to realize their basic human rights, equity and equality, and play their full roles in improving their lives and those of their families and communities.

Violence against women and girls assumes gigantic proportions in a patriarchal social system like that of India. Not only is violence against women and girls rampant and routine, long standing ways of thinking and acting have made it normal and acceptable in the society, making India the fourth most dangerous country for women, according to a 2011 Thompson Reuters Foundation poll.

In response to the recent attack and rape in India, CARE India is calling on the government of India to make long-term commitments in the form of standard procedures and mechanisms in dealing with cases of violence against women, stricter policies and laws, capacity building for police personnel and a recognition of the the need to engage with men and boys to address deeper social issues.

In India, CARE focuses on the empowerment of women and girls particularly from low caste and tribal communities because not only are they disproportionately affected by poverty and discrimination; but in a patriarchal society, they suffer from multiple deprivations in the realization of their rights and entitlements.

One billion women will be victims of violence in their lifetime

Gender-based violence is one of the most pervasive and, yet, least-recognized human rights abuses in the world. In all of our programs, CARE works to eliminate the behaviors which perpetrate gender-based violence and inequality. Empowerment of women and girls, then, is both an end in itself as well as an indispensable milestone in achieving a just and equitable society.

BSIC is improving the health, safety and working conditions of beer promoters by setting industry standards.

This 32 page guidance document is a practical guide for thinking about GBV in non-GBV programs.

To Be Well At Heart

A CARE-authored article in the War and Trauma foundation that deals with the impacts of conflict on women's well-being and how working...

Read about the Young Men's Initiative in the Balkans and what we're learning about how working with men and boys can lead to women's...

Outlines the major findings of the Great Lakes Advocacy Initiative in Burundi, Rwanda, Uganda and the DRC from 2009 to 2013.

DRC, Micro-Savings and Survivors of Violence

Village savings and loans groups within a holistic socio-economic approach to helping survivors of sexual and other forms of gender...

An Advocacy Guide for Grassroots Activists in Burundi

One-Stop Model of Support for Survivors of Gender-Based Violence

Preventing and responding to GBV is an integral part of CARE’s commitment to promoting gender equality and ending poverty.

From 2007-2012, CARE International in Benin, implemented a project called EMPOWER—Enabling Mobilization and Policy Implementation for Women’s Rights. This project, funded by the US government through the US Agency for International Development (USAID) aimed to galvanize a national response to GBV by strengthening support services for survivors and improving policies and laws on gender-based violence and women’s rights more broadly. This brief highlights the experiences and lessons learned from the advocacy and social mobilization work done through this project to rally support for passage of a new anti-GBV law and to increase access to assistance for survivors.