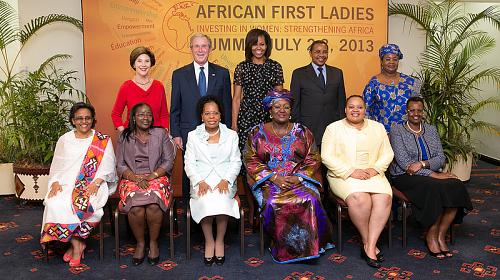 “We’ve seen that when women have the knowledge and skills to sell what they produce, they spend their earnings on food, health care and school for their children,” says Dr. Jemimah Njuki, Global Coordinator for CARE’s Women in Agriculture program. On Tuesday, Mrs. Bush and eleven African first ladies, including Mrs. Janet Museveni of Uganda and Mrs. Roman Tesfaye of Ethiopia, attended a panel that Njuki moderated. Panel members discussed innovative strategies that give women farmers access to consumer markets, improved farming techniques, and technologies that increase yield.

Earlier in the day, participants attended a session with both Mrs. Bush and Mrs. Obama on the role of first ladies.

In 2010, CARE started a program called Pathways that helps women farmers lead the way to improvements in food security. “Its goal is to empower women and increase harvests,” says Njuki. “We’re now working with close to 150,000 women smallholder farmers in six countries, four of which are in Africa.”

CARE’s Village Savings and Loan Associations offer women a secure opportunity to save money and make loans to each other to start small businesses or pay vital household expenses such as school fees for their children. Women use their small loans to raise poultry, make soap, grow vegetables, and earn income in other ways. More than 500,000 people in Tanzania have benefited from the associations, which help more than 3 million people in 26 African countries.

“We’ve seen entrepreneurial women take the lead in growing and selling vegetables and then turn their families’ financial situation completely around,” says Njuki.

“Thanks to programs that encourage entrepreneurship, millions of hardworking women have been able to feed their families and keep them healthy,” says Njuki. “We’re proud that the first ladies learned about those achievements and we look forward to their support.”

The COVID-19 pandemic is spreading, and the situation is changing quickly in many countries around the world. This brief covers what VSLA groups are doing differently to meet the COVID-19 crisis.

Savings groups are one of the most consistent and sustainable platforms for community programming across many sectors and contexts. COVID-19 poses crucial health and economic risks for Savings Groups as markets falter, mobility is restricted, and community gatherings are restrained.

One of CARE’s innovative and transformative approaches, Village Savings and Loan Associations (VSLAs), harnesses the ancient practice of...

Launched in 2018, the VSLA Scaling strategy is a bold initiative to scale CARE’s VSLAs to reach 50 Million women and girls by 2030.

A Village Economic and Savings Association discusses finance, borrowing and saving in Ethiopia.

CARE’s 2020 program strategy aims to help tackle the underlying causes of poverty and social injustice, as part of global efforts to...

This 4 page brief shows how young people are using loans from VESAs to start their own businesses.

Access to finance is a major barrier for farmers in Ethiopia, especially PSNP4 beneficiaries who are part of the USAID-funded SPIR...

The “Youth” VESA is a new program piloted by SPIR which brings together the children of PSNP4 households as a self-selected group of...

VESAs are groups of 15-25 households, brought together as a foundation for all economic and social activities.

This report highlights the impact of the Women on the Move project, which theorizes that if a critical mass of women’s groups, in particular savings groups, are part of an interconnected social movement, and if women and girls have greater power to influence unequal social and economic norms, then women and girls will experience positive change in their socio-economic status and be able to influence change at all levels.

She Feeds the World

This 2 page brief highlights the experience of the GRAD program working to get households in rural Ethiopia who have outstanding loans...

Want to get to empower women?

This two page brief highlights learning from the USAID-funded GRAD programs experiences with Loan Guarantee funds to get financial...

There are an estimated 1.5 million people living with HIV in Malawi and the Democratic Republic of Congo (DRC), with prevalence rates of nearly 11% and 1%, respectively. Through the Livelihoods and Food Security Technical Assistance II (LIFT II) project, CARE works to expand access to economic opportunities for people living with HIV and their families, and in doing so helps to improve food security and financial status, so that they are able to obtain life-saving healthcare.

“Within Reach: How banks can grow profitably by being more inclusive”

Banking on Change: Breaking the Barriers to Financial Inclusion

Women are engaged to be sellers and distributors of clean cook stoves and solar lanterns/lamps in an project called “wPOWER.”

Analysis of the ISHAKA Experience

Kenya: Linking the Cash Box to the Bank – Formal Banking of Savings Groups Through Mobile Money

How the World’s Most Influential Change Agents Mobilize for Action

VSLA as a Platform for Integrated Programming

The Integration of Social Analysis and Action into SAFI

Access Africa State of the Sector Report: Closing the Gap

This review focuses on the potential for the savings-led microfinance (MF) movement in sub-Saharan Africa to close an important gap in...

Access Africa: The Power of Financial Services Program Update – May 2011

Securing capital to start a business or accruing savings is a near impossible task for millions of people in the developing world.

“Bringing Financial Services to Africa’s Poor” focuses on microfinance, a tool that’s been proven effective against poverty in the...

When poor people have access to financial services – secure savings, credit, insurance and other products – they can lift themselves out...

Connecting the World’s Poorest People to the Global Economy

The importance of expanding access to financial services for the world’s poorest people is increasingly recognized.

CARE’s programs in Economic Development work to improve the economic security and income opportunities of the poor.