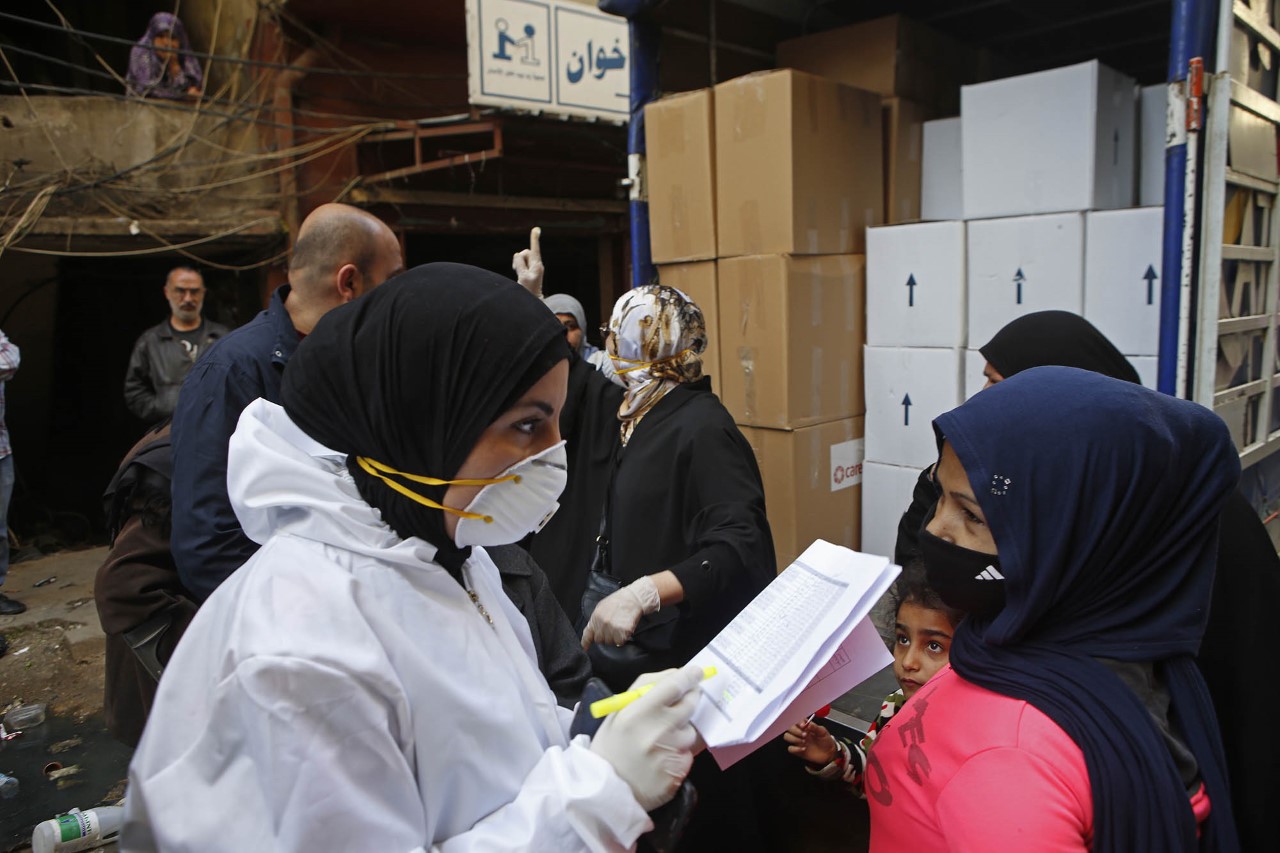 As part of CARE’s response to COVID-19 in Lebanon and to prevent further spread of the virus, CARE staff fill vans with food parcels and hygiene items, in partnership with Lebanese NGO Sanabel al-Nour.
Photo: Paul Assaker/CARE

As part of CARE’s response to COVID-19 in Lebanon and to prevent further spread of the virus, CARE staff fill vans with food parcels and hygiene items, in partnership with Lebanese NGO Sanabel al-Nour.
Photo: Paul Assaker/CARE

Over half the population in Lebanon are currently struggling to access food as coronavirus lockdowns, rising inflation and the health crisis are making most basic foodstuffs unaffordable for the average Lebanese family.

Beirut (July 15, 2020)–CARE International is extremely worried about the developing hunger pandemic in Lebanon as a result of the ongoing socio-economic crisis and the added strain of the COVID-19 outbreak. Lebanon was already in the grip of a terrible economic crisis, when the global COVID-19 pandemic hit. Inflation is at record high levels and half of the population is struggling to put food on the table;the most essential goods such as milk, rice and sugar, have tripled in prices and have become unaffordable for many Lebanese households.

“What is happening today in Lebanon is much more than a socio-economic crisis, it is a real humanitarian crisis. Having access to food is now a challenge for more than 50% of the population. We see people rummaging through garbage cans for food. Groups have formed on Facebook where people exchange clothes for diapers for their babies, others exchange their furniture, their children’s toys for a little money to eat. The situation is really dire,”warns Bujar Hoxha, Country Director of CARE in Lebanon.

He adds, “We are talking about hundreds of thousands of people who have fallen off the cliff. Lebanon faces a humanitarian crisis that requires urgent international intervention.”

In Lebanon, the Coronavirus has exacerbated the most serious economic crisis the country has known since 1990. Since last October, food prices have continued to rise. In just a few months, the value of the Lebanese pound has plummeted on the foreign exchange market: from 1,500 liras last October 2019, the US dollar is now worth 8,000 liras.

“I have always been poor, but things have really gotten worse in the past three years to reach a climax with the COVID-19. With confinement, my husband was no longer working and we had nothing to eat. Now we no longer eat meat or fish. Instead of a kilo of rice, I buy a half. For potatoes, instead of three kilos I buy a kilo and a half. But I’m lucky. I don’t have to pay rent. Those who have to pay rent die of hunger,”explains Suzanne, 42, a seamstress in Tripoli, the second city in Lebanon and the poorest city on the Mediterranean.

CARE is supporting women like Suzanne with distributions of emergency food and hygiene supplies, as well as water access programs for Syrian refugees and the most vulnerable Lebanese populations. In the longer term, CARE also plans to support economic recovery by continuing income generating programs.

“The international community, in alignment with Lebanese policy makers, must react immediately to secure funding for vulnerable Lebanese households during these times. The time to act is now; people are seeing their lives hit rock bottom everyday.”says Hoxha.

CARE re-established a full fledge presence in in Lebanon in 2013 to support Syrian refugees and Lebanese host communities affected by the Syria Crisis. CARE meets refugees’ and host communities’ most basic and pressing needs, mainly providing water, sanitation, hygiene, non-food items and cash assistance in the areas of Mount-Lebanon, North  and South Lebanon. This includes emergency water and sanitation rehabilitation at household level distribution of sanitary items, to newly arrived families and the provision of hygiene promotion sessions.