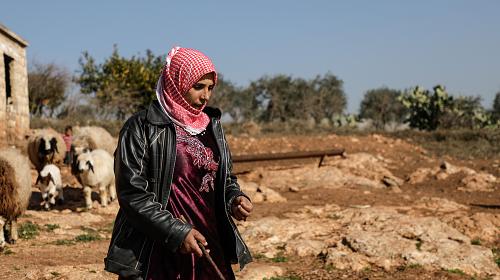 AMMAN (March, 11 2019) – As the crisis in Syria enters its ninth year, more Syrian women are increasingly becoming the main source of income in their families . Many men have left to fight, been detained or killed, leaving women with added responsibilities of earning an income, on top of their traditional roles of caring for children and managing the household. With world attention focused upon military action and power politics in the Syria Crisis, women carry a heavy load for the sake of their families.

“Women in Syria have shown such resilience in adapting to their changing roles to ensure their families’ survival and well-being,” says Nirvana Shawky, Regional Director for CARE in the Middle East and North Africa. “As world leaders continue to make headlines, the least we can do is not lose sight of their needs. Time and time again, Syrian women have shown great courage in overcoming severe hardship. They deserve our utmost respect and need our collective support at this critical time.”

Mariam*, 36, is a mother of four from Idlib in northwestern Syria. Her husband died when the war started. Since then, she has had to take her children out of school to help provide for the family and look after their siblings, while she works.

“It makes me very sad. My older son can’t even read or write. If he sees a sign on the road, he has to ask his sister to read it for him”, says Mariam. “Every person should have a happy childhood. It matters for our future. And I feel so sad that I am unable to give this to my children”.

Changes in the role of Syrian women has led to them having more power and decision making authority at the family level. With greater access to the public and civic space, they now have a voice. Men, on the other hand, face arrest, detention, torture, forced conscription into the Syrian army and even ‘disappearance’ at the many checkpoints, manned by a plethora of state and non-state armed groups, that now litter the country. Out in public, men also face threats – suffering increased exposure to harassment and violence. Inside homes, rates of domestic violence have increased, as a result of stress and tension caused by the conflict and being forced to flee their place of residence.

Salma* lost her husband 14 years ago, leaving her and their six children behind. She struggled to provide for her family while the fighting was ongoing.  “I lost my job when the war started,” says Salma. “I had no income and could not buy food for my children. Sometimes I would go to the bakery to ask for some bread.” The 47-year-old now endeavors to put food on the table. “We must fight to provide for our families, especially when we are on our own,” she adds.

Young women, in particular, face risks, including early and forced marriage, where their families can no longer afford to provide for them and intend to protect girls by marrying them off. Human trafficking, sexual abuse and exploitation, are also prevalent, particularly in instances where women find themselves vulnerable and isolated without the protection of families, relatives or friends.

“The last eight bloody years of the conflict have had devastating consequences for women and girls. Households headed solely by women, including war widows, are in desperate need of protection and support. Syrian women are the key to the country’s future. They must be given a platform to voice their needs and the future they deserve,” says Shawky.

The tragedy of the Syrian War will impact the Middle East for generations to come. Inside Syria, an estimated 11.7 million people are in need of various forms of humanitarian assistance, of whom more than half are women and girls. On average, some 170 people have been killed daily, since the start of the conflict in 2011. Half of the people in Syria have had to leave their homes, with 6.2 million displaced elsewhere in the country and 5.6 million registered as refugees in neighboring countries. With no end in sight in this protracted crisis, women and girls are at risk and should not be forgotten as they bear the brunt of war.

CARE has been providing aid in Syria since 2014, and has reached more than 3.4 million people so far. Our work is focused on food security, livelihoods, shelter, water and sanitation, and psychosocial support for people in crisis. We also work in Jordan, Lebanon and Turkey with Syrian refugees and host communities.

(* Names have been changed for protection purposes.)

Over the past decade, CARE Ethiopia has employed a rights-based and comprehensive approach that considers all the inputs a young person...

AMMAN (March, 11 2019) – As the crisis in Syria enters its ninth year, more Syrian women are increasingly becoming the main source of income in their families . Many men have left to fight, been detained or killed, leaving women with added responsibilities of earning an income, on top of their traditional roles of

AMMAN (March, 11 2019) – As the crisis in Syria enters its ninth year, more Syrian women are increasingly becoming the main source of income in their families . Many men have left to fight, been detained or killed, leaving women with added responsibilities of earning an income, on top of their traditional roles of

This 54 page document describes the SHOUHARDO food security program in Bangladesh and how it uses a women's empowerment model to...

The Syrian Humanitarian Crisis: The Impact on Jordan’s Long-Term Development & Women and Girls

Findings from the CARE Learning Tour to Jordan. In August 2013, a group of high-level policymakers and experts, including Rep. Lois Capps, D-Calif., traveled to Jordan to learn how U.S. investments are helping the country address both its long-term development as well as the refugee crisis.