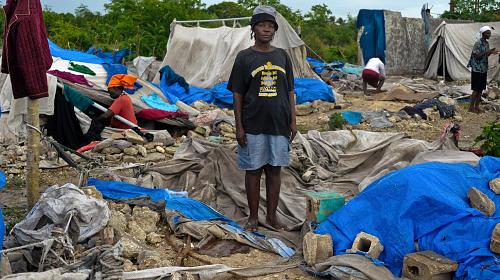 Haitian Janetta Lindsey, 46, stands in the exact location where her tent home once stood before it was destroyed during Tropical Storm Isaac in an area outside of Port-au-Prince August 26, 2012. Tropical Storm Isaac left six dead in Haiti, still recovering from a 2010 earthquake, and at least three missing in the Dominican Republic after battering their shared island of Hispaniola on Saturday. REUTERS/Swoan Parker

PORT-AU-PRINCE (August 27, 2012) – Though damage from Tropical Storm Isaac was less than feared, the global humanitarian organization CARE is working to meet the needs of vulnerable families who were harmed by the storm’s heavy rains. CARE is distributing tarps to 1,000 families today in Carrefour, where Isaac has blown off rooftops and caused flooding.  A separate distribution will provide shelter materials such as tarps, ropes and nails to an additional 3,000 families living inside and outside of camps.

Tropical Strom Isaac reached Haiti at approximately 2 a.m. on 25 August, bringing heavy rains, causing power outages, forcing rivers and streams to overflow their banks. “The needs are most dire in Port-au-Prince, Carrefour and Leogane,” said Jean-Michel Vigreux, CARE’s country director in Haiti. “The emergency shelters in camps in Carrefour have been hit hard by the rain. They are leaking and flooding. Water is stagnating around the camps and in some areas latrines are flooded. In the neighborhoods water is rushing through poorly constructed drainage, eroding the already precarious hillsides and ravines.”

PORT-AU-PRINCE (August 24, 2012) – The global humanitarian organization CARE is making final preparations to aid Haiti’s most vulnerable families today as they gird for a tropical storm threatening to bring more misery to a nation still recovering from a devastating 2010 earthquake.

The latest predictions have Isaac making landfall in western Haiti later today and potentially dumping more than 12 inches of rain on the country.

CARE, whose largely Haitian staff numbers 300 in the country, has designated a 79-person rapid response team. They are on stand-by to lead assessments of water and sanitation facilities and help with a wide range of possible distributions in coordination with the Haiti’s water authority and the United Nations. Working in different parts of the country, including Carrefour, Leogane and Grand Anse, CARE is prepared to support the distribution of hygiene kits, latrine slabs, tarps and aquatabs that purify drinking water.

In Port-au-Prince, the consequences of a prolonged, heavy rain could be particularly dire, Vigreux said. The lack of forest cover in Haiti creates the potential for mudslides, he said. And flooding brought on by heavy rains could potentially hasten the spread of waterborne diseases.  “It’s absolutely shocking how quickly the waters can rise here,” Vigreux said. “And the camps are particularly vulnerable. Preserving clean water supplies will be critical so people don’t seek out alternative, potentially contaminated sources.”

CARE, which has worked to combat gender-based violence and promote reproductive health in Haiti, will be paying particular attention to the needs of women and girls. Food and nutrition are of concern, particularly for pregnant women. CARE is prepared to scale up its food voucher program, which currently serves 12,000 families in the Grand Anse region. Participants receive electronic vouchers for the purchase of rice, maize, beans and cooking oil and other local products.

CARE, which has been in Haiti since 1954, works closely with the Haitian government, the United Nations Office for the Coordination of Humanitarian Affairs (OCHA) and other nongovernmental organizations. After a deadly earthquake leveled much of the capital and surrounding areas in January 2010, CARE reached more than 290,000 people with food, clean water, temporary shelter and other vital services after the disaster. CARE provided clean water for more than half a million people, built 2,550 transitional shelters and constructed 2,500 latrines and showers.