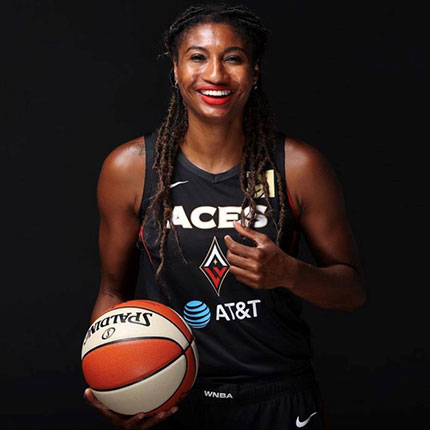 Two-time Olympic Gold Medalist Angel McCoughtry is known best for her many accomplishments as a professional basketball player. Angel was selected as 1st overall pick by the Atlanta Dream in the 2009 WNBA Draft, she is also a five-time WNBA All-Star, two-time WNBMA scoring champion, two-time WNBA steal leader, and has earned seven All-Defensive First Team honors. Off the court, McCoughtry has been featured on ESPN’s “Body Issue,” “the Revolver Podcast,” “Pet Pages Atlanta,” “NBA Live 18 & 19,” and MTV’s “Wild’n’Out.” She is also a small business owner of McCoughtry’s Ice Cream in Castleberry Hill, Georgia.

McCoughtry has set out to help revitalize run down basketball courts through #McCoughtrysMission, an initiative that grows the game of basketball by providing a space for kids to play. Another philanthropic venture of Angel’s is the Angel McCoughtry’s Dream Foundation, which is guided by the mission to teach and empower youth to recognize their dreams. The foundation promotes trainings based on fundamentals of sportsmanship, competition, and respect. Angel is also a part of the Big Brothers Big Sisters of Metro Atlanta nonprofit, where she serves as an outstanding champion and honorary Big.