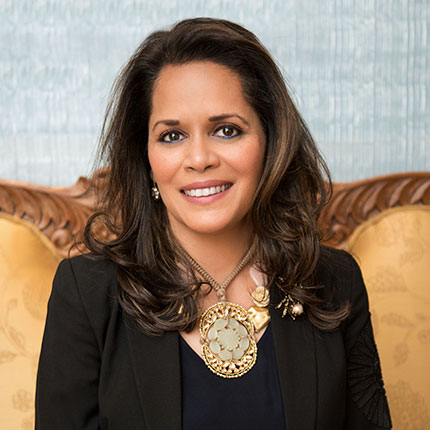 S. Mona Sinha is a globally recognized advocate for gender equality. She has parlayed a corporate career to work at the intersection of social justice and women’s leadership.

Mona is CEO and Founder of the Insight Circle Fund which uplifts women’s leadership and centers marginalized communities. In 2023, she will launch the Insight Circle Project which will catalyze resources for bold ideas and paradigm shifting leaders.

Mona is the Board Chair of Women Moving Millions and the ERA Fund for Women’s Equality. She is an Executive Producer of Disclosure, a groundbreaking documentary film on trans representation. She is also an Executive Producer of Sell.Buy.Date, My Name is Andrea and the 73rd Tony Awards nominee for Best Play and finalist for the 2019 Pulitzer Prize for Drama, What the Constitution Means to Me.

With a focus on governance, strategy and sustainability, Mona serves on several non-profit boards. She is a trustee emerita of Smith College, where she was Vice Chair and led the $486MM Women for the World capital campaign as well as the transgender admissions policy.

Mona is an investor in women-led businesses and mentors several hundred people. She has a BA in Economics from Smith College and an MBA in Finance/Marketing from Columbia University.

Mona has been widely recognized by CARE USA, Columbia University, Smith College, Children’s Hope India, Women’s eNews, Breakthrough and Apne Aap/Gloria Steinem. In 2015, she received the Ellis Island Medal of Honor, which is presented annually to US citizens whose accomplishments in their field and service to the world are cause for celebration.