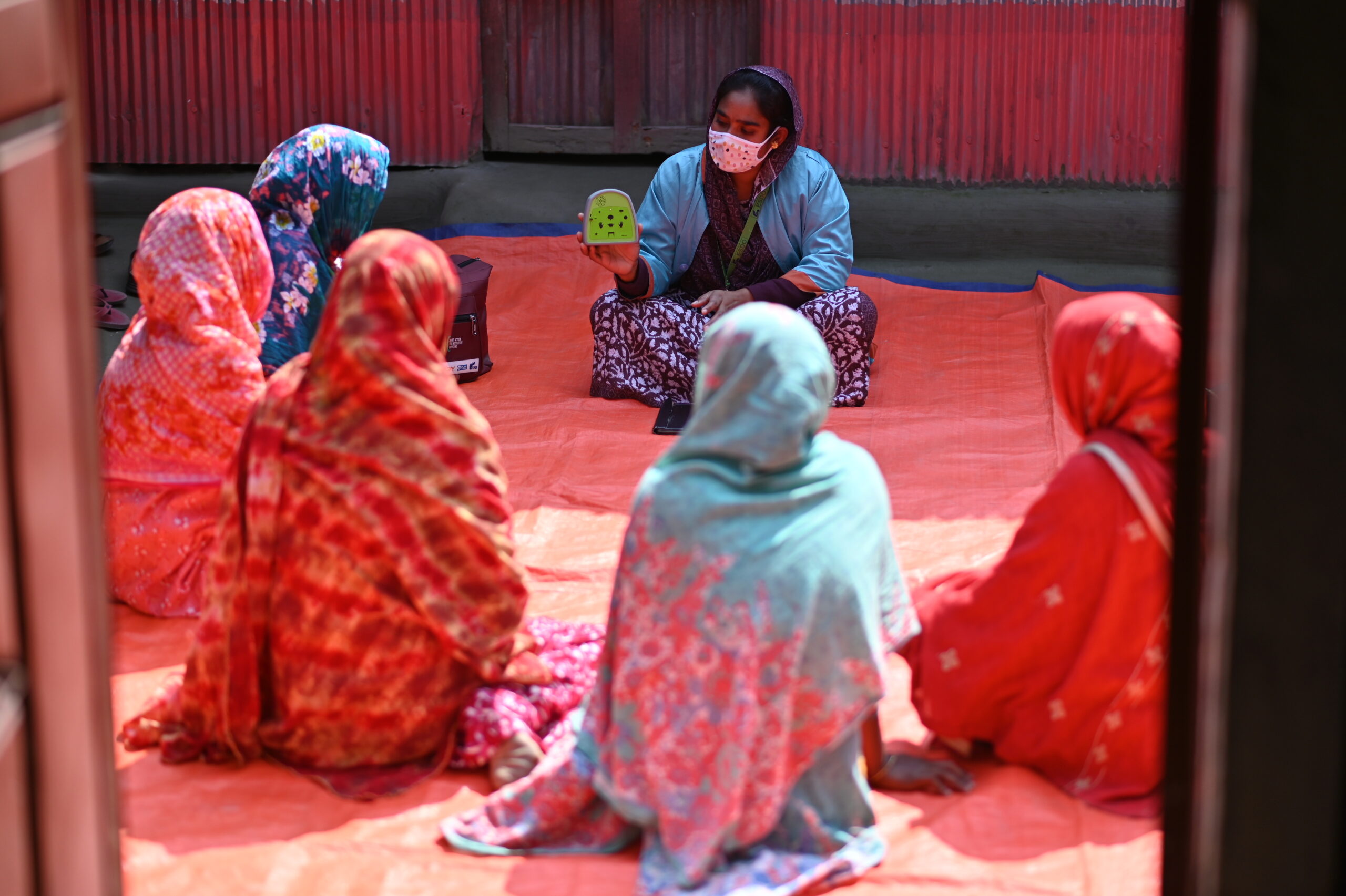 A Community Volunteer explaining the use of Talking Book during the COVID-19 Pandemic | Photo: Akram Ali/ CARE

A Community Volunteer explaining the use of Talking Book during the COVID-19 Pandemic | Photo: Akram Ali/ CARE

“The Talking Book has helped me get very useful information during and after my pregnancy. The songs are enjoyable and it is not boring to listen to,” says Asma Akhter, who is a lactating mother living in Nilphamari Sadar Upazila of Bangladesh.

Asma is one of nearly 62,000 people who have listened to the Talking Book, an initiative of the Joint Action for Nutrition Outcome (JANO) project in Bangladesh. The Talking book is an audio device that holds a library of informational audio content in the form of songs and general messages that are useful for pregnant mothers, lactating mothers, adolescent girls and boys, and more.

Having songs and content that is “not boring” means that more women like listening to the Talking Book. As per the 2022 annual assessment of the JANO project there was a 2.5% reduction in the number of women affected by anemia. Children are growing taller and healthier as there was a 47.9% increase in dietary diversity among 6 to 23 months old children and 13% increase among women of reproductive age. Women are more aware and healthier as 86.6% of women and girls have claimed nutrition specific sensitive health services from community clinics.

Funded by the European Union with co-funding from the Austrian Development Cooperation, JANO aims to improve maternal and child nutrition in Bangladesh. The project works with the Government of Bangladesh (and private sector at the national, regional, and local levels), to support the effective implementation of the National Plan of Action for Nutrition2 (NPAN2). CARE Bangladesh is one of its technical partners along with Plan International Bangladesh and Eco-Social Development Organization (ESDO).

As a part of JANO’s technological intervention for social and behavioral change communication (SBCC) on different nutrition-sensitive and nutrition-specific practices, the project deployed 208 Talking Books through 208 volunteers in Rangpur and Nilphamari districts of Bangladesh. Talking Book played a crucial role in hard-to-reach areas where health staff faced challenges in covering SBCC interventions. The Talking Book was not only appreciated by the communities but volunteers too as it reduced their talk time during sessions.

Sharmin Sultana, one of the community volunteers for JANO project says, “Earlier it was difficult to remember and convey nutrition-related technical messages to the participants. Now with the Talking Book it is much easier. It saves us time, reduces our workloads and we are now able to reach more households with important nutrition information.”

The Talking Book was especially effective during the COVID-19 pandemic where volunteers could disseminate messages from the Talking Books in small groups of five to ten participants. The audios in the Talking Book have icon-based buttons where even a non-literate user can choose the topics that interest them most, replay content as often as they want, and record their own messages and feedback.

“Through the Talking Book, I learned a lot about the nutritious food I need during pregnancy,” says Asma Akhter. “I would be shy to ask repeated questions to JANO volunteers but with the Talking Book, I can play the key messages as often as I want,” she adds. Asma started listening to the talking book during her pregnancy and still listens to the messages of the Talking Book to ensure that her three months old newborn receives enough nutrition. She is also better aware of the services that her nearest health centers provide to her and hwe newborn. She was made aware of exclusive breastfeeding from the talking book and health centers and plans to continue it till her newborn is six months old.

Overall, the project has been able to develop about 38 audio content from government-approved sources. 208 volunteers are trained and deployed with the Talking Book in 7 Upazilas or sub-districts and 61,647 participants have listened to the Talking Book. There are a total of 38 messages in each talking book. Overall, people have listened to 112,946 messages. The most popular message was ‘How to take care of pregnant mothers (song)’ which has been played 11,844 times, followed by ‘How to take care of lactating mothers and children under five (song) played 7673 times and ‘Health check-up schedule for pregnant mothers (speech) played 7,480 times.