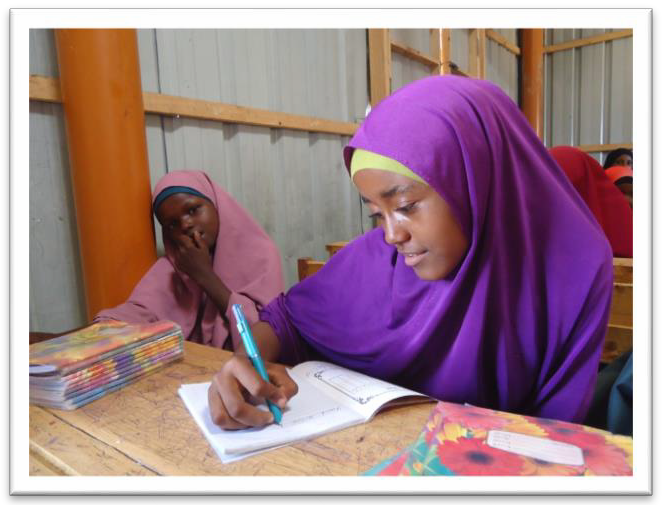 “When I joined this school, I could hardly read and write,” says 12-year-old Hamdi. “Now I am the best in my class. I can even speak English. When I grow up, I want to be a doctor and help all people who are sick or hurt.”

MOGADISHU, SOMALIA – Hamdi is one of six children. Her parents divorced and abandoned her and her siblings when she was only 6, shortly after they had fled ongoing fighting in their hometown in the Lower Shabelle region for Mogadishu. The children were left to fend for themselves. Hamdi’s oldest sister, Istar, became the only mother and father they would know.

At first, Hamdi was enrolled in a school that was providing affordable primary education funded by the U.N. But in 2013, the school was shut down due to lack of funds, and Hamdi dropped out. She had always dreamed of becoming a doctor, but with the closure of her school and her sister’s inability to provide school fees, she felt lost and disheartened.

“My life had lost meaning,” Hamdi says. She began washing clothes for other families to support the household income. She is from a minority clan in Somalia, meaning that she faces more challenges and has fewer opportunities compared with the other dominant clans, especially in terms of access to quality education and gainful employment.

Opportunities for education in Somalia are limited anyway. Only 42 percent of primary school-age children in the country are going to school. Civil war, drought, displacement and steep social and economic barriers have affected education delivery and contributed to one of the lowest school enrollment rates in the world.

CARE – with funding from the Education Above All Foundation – aims to contribute to sustainable and relevant primary education for all in Somalia. The goal is to enroll 30,100 poor and marginalized out-of-school children across three regions of Somalia. So far, CARE has constructed 155 classrooms and rehabilitated 27 classrooms in 58 schools, supported teachers with training, enrolled 13,099 children in school and provided teaching and learning materials. Due to high enrollment rates in the community schools in Mogadishu, a double shift system was introduced, one in the morning and the other in the afternoon, to ensure that all children have an equal learning opportunity.

Since the collapse of the government in 1991 and subsequent outbreak of civil war that has persisted for 25 years, Somalia has had no public schools, as all government-owned schools are privatized and some occupied by squatters. The fees for primary schools range from $10 to $15 a month per child, while the average family income is $1 a day. For most families, education remains a luxury.

In November 2014, through community outreach, Hamdi’s sister heard about the new CARE primary school constructed in their camp for internally displaced people. Excited at the prospect of re-enrolling her siblings, Istar immediately made Hamdi quit her job and sent her and three of her siblings back in school, despite the fact that they were helping support the family with daily income.

Hamdi is now in third grade. Undeterred by the sense of hopelessness experienced by the displaced communities in Mogadishu, Hamdi works very hard in school and is admired by her teachers. She has already learned to read and write Somali and basic English, and is excited about restarting her education.

“Before the opening of this school, children were roaming aimlessly in the camp,” says Istar, Hamdi’s older sister and protector. “You know the situation here in Mogadishu: Small children are easily persuaded to join militia and gang groups, especially if they are idle. Now, the children from this camp are occupied with schooling and are disciplined.”