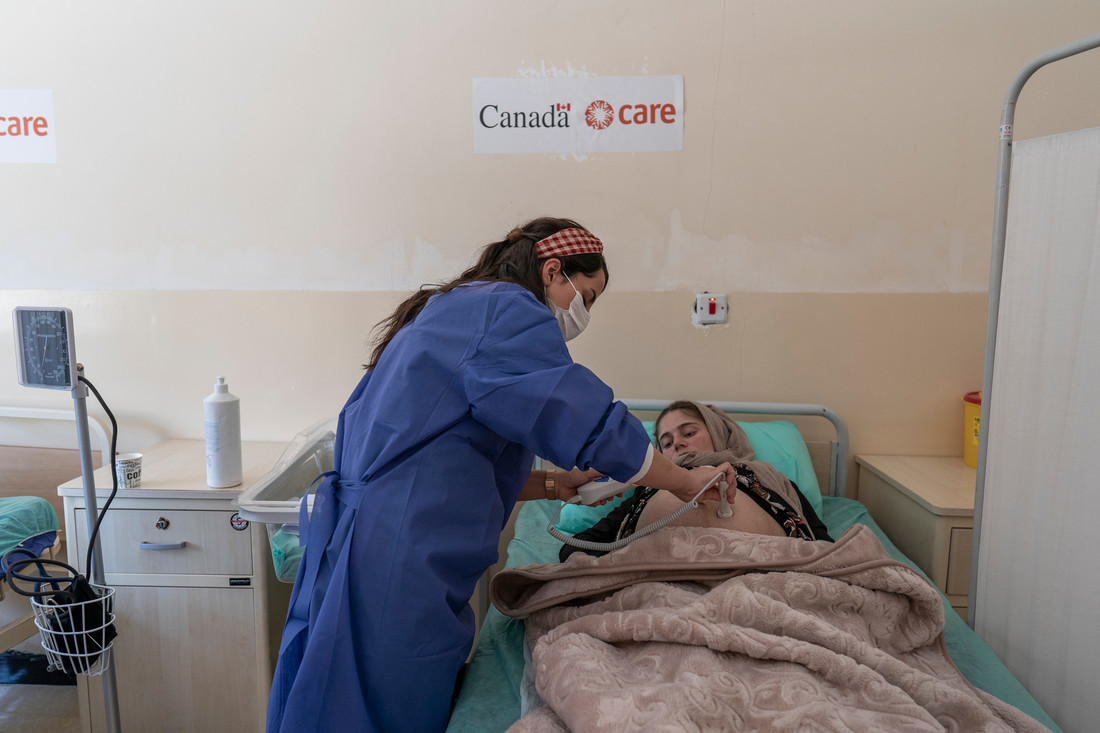 A maternity unit in Baadre helps with deliveries as well as pre- and postnatal medical care for mothers and check-ups and vaccinations for babies. Photo credit: CARE / Agency Ostkreuz Johanna Maria Fritz

A maternity unit in Baadre helps with deliveries as well as pre- and postnatal medical care for mothers and check-ups and vaccinations for babies. Photo credit: CARE / Agency Ostkreuz Johanna Maria Fritz

So in 2022, CARE country offices decided to leverage their learnings to affect change on additional key health topics such as maternal health and childhood immunization. Through a yearlong Accelerator program with Meta, CARE Iraq set out to learn how social media might complement on-the-ground health programming related to antenatal care (ANC), or healthcare during pregnancy.

To help develop ads that would resonate with the target population, CARE Iraq created a fictional core persona known as “Fatima,” who is a 19-year-old woman recently married and in her fifth month of pregnancy with her first child. Fatima, who wants to have a healthy baby and make her family proud, left school after 6th grade. All her knowledge about pregnancy is from other women around her, most notably her mother and mother-in-law. This fictional persona was created from composite audience data and research.

In addition to designing for this core persona, CARE knew it would also be important to reach the target audience’s husbands who would ultimately be the ones approving doctor visits and providing transportation. To this end, the copy that accompanied each ad was personalized based on the gender of the audience.

CARE Iraq created a phased approach to social behavioral change messaging with the first phase of the advertising emphasizing the importance of eight antenatal visits during pregnancy. This phase ran a mix of static, graphic images, and short videos (20 seconds) targeting men and women in between the ages of 18-49 and the ads featured real people, including a famous woman newscaster.

In addition to measuring communication metrics, CARE also used Meta’s brand lift study tool to test the potential change in knowledge among the target audience. For this phase, CARE asked: “How important is it to go to the eight appointments specified by the competent doctor during pregnancy to ensure the safety of pregnancy and childbirth?”

While CARE Iraq saw strong results for Ad Recall, particularly in females aged 35-44 (+3.4pts), men in the age ranges 35-44 (+6.7pts) and 45-54 (+7.3pts), the campaign did not drive significant lift in the key question around importance. For this question, the baseline of knowledge was high, with 67% of the control group (those that did not see the ads) already aware of the importance of eight appointments.

For Phase Two of the campaign, CARE Iraq built on the messaging and asked, “How important do you think family planning methods are for ensuring the health of women and babies?”

For this phase, the geographic region was expanded to areas without offline programming to understand if there is a difference in the baseline knowledge. Once the campaign concludes, CARE Iraq will evaluate the number of antenatal appointments in the last year to understand if a correlation in appointments can be seen in areas where the online messaging ran.

These efforts build on CARE Iraq’s on the ground programming with pregnant women to increase reproductive health knowledge and encourage uptake of antenatal and postnatal care.

Since they began testing in 2021, CARE Iraq has learned many best practices that drive change using social media, from connecting with people's values to reinforcing social norms.

“I am eight months pregnant, but this is the first time I'm seeing a doctor,” says Belqees*, 28, at a CARE mobile health clinic in Balkh province, northern Afghanistan. Like many women, Belqees either lives too far from a public hospital or cannot afford the transportation costs, and the cost of attending a private clinic puts that option out of reach