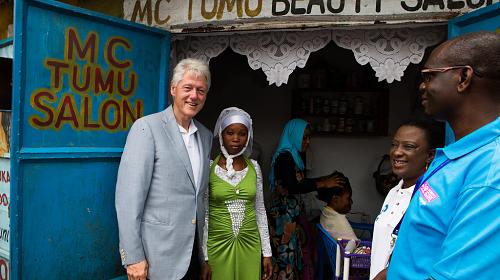 Banking on Change is the world’s first savings-led microfinance program that combines the deep understanding of two leading nongovernmental organizations with the financial expertise of a global bank to encourage extremely poor people to begin their path to financial inclusion through village savings and loan associations.

Barclays made the Clinton Global Initiative (CGI) Commitment to Action when launching Banking on Change at the CGI Annual Meeting in New York in 2009. The commitment was to improve the quality of life for poor people by enhancing, innovating and accelerating sustained access to savings and other financial services.

Clinton visited the group, in the Vingunguti ward near Dar Es Salaam, and saw how members of the group have established a culture of saving regularly. Combined with financial and small business training, he heard how many members have gone on to establish micro-enterprises.

“I have been involved in programs like this for over 30 years, long before I became President and I am very impressed by this one,” Clinton said during his visit. “What you are doing takes far longer to build a fund than if you are given money from outside the group, but this is much better, because it is your fund, that you own because you generate the increase in savings.”

“This is the sort of thing that banking should be doing. It’s about real people, taking out real loans, to do real things. Thank you to Barclays, Plan and CARE, and to the community for all you are doing. This sends out a great message to Tanzania, and to all of Africa.”

Among the program participants with whom Clinton spoke during his visit was Zainabu Rashid, a 22-year-old who runs her own hair salon in the village.

“Joining the savings group enabled me to save up enough money to rent my own salon,” Rashid said. “I’d always dreamt that I would have my own salon and even my own chain of two, three, or four and employ other people to work in them. Now I believe that could be possible. I feel that I am now the mistress of my own destiny.”

In just three years the Banking on Change partnership has helped more than half a million people on the journey towards financial inclusion. For some groups who have saved regularly, they have been able to access more formal banking, a process known as ‘linkage’.

“Banking on Change has already made a huge difference to people’s lives across the developing world, and the challenge now is to scale this up,” says Barclays Chief of Staff Catharine French, who attended the visit with Clinton. “The success of the program over the past three years highlights the power of partnering between the private sector and NGOs.”

The former president and his daughter Chelsea Clinton are travelling across Africa to visit Clinton Foundation projects in Malawi, Zambia, Tanzania, Rwanda, and South Africa. This trip, and the projects visited, highlighted many of the issues they have long worked on—economic growth and empowerment, equality of opportunity, and health access.

Banking on Change has to date achieved:

About CARE
Founded in 1945 with the creation of the CARE Package®, CARE is a leading humanitarian organization fighting global poverty. CARE places special focus on working alongside poor girls and women because, equipped with the proper resources, they have the power to lift whole families and entire communities out of poverty.
Our six decades of experience show that when you empower a girl or woman, she becomes a catalyst, creating ripples of positive change that lift up everyone around her. That’s why girls and women are at the heart of CARE’s community-based efforts to improve education, health and economic opportunity for everyone. We also work with girls and women to promote social justice, respond to emergencies and confront hunger and climate change. Last year CARE worked in 84 countries and reached more than 83 million people around the world. To learn more, visit www.care.org.

About Barclays
Barclays is a major global financial services provider engaged in personal banking, credit cards, corporate and investment banking and wealth and investment management with an extensive international presence in Europe, the Americas, Africa and Asia. Barclays’ purpose is to help people achieve their ambitions – in the right way.

With over 300 years of history and expertise in banking, Barclays operates in over 50 countries and employs 140,000 people. Barclays moves, lends, invests and protects money for customers and clients worldwide.

For further information about Barclays, please visit our website www.barclays.com.

About Plan
Plan is a global children’s charity. We work with children in the world’s poorest countries to help them build a better future. A future you would want for all children, your family and friends. For 75 years we’ve been taking action and standing up for every child’s right to fulfill their potential by:

We do what’s needed, where it’s needed most. We do what you would do. With your support children, families and entire communities have the power to move themselves from a life of poverty to a future with opportunity. www.plan-uk.org

About the Clinton Global Initiative
Established in 2005 by President Bill Clinton, the Clinton Global Initiative (CGI), an initiative of Bill, Hillary & Chelsea Clinton Foundation, convenes global leaders to create and implement innovative solutions to the world’s most pressing challenges. CGI Annual Meetings have brought together more than 150 heads of state, 20 Nobel Prize laureates, and hundreds of leading CEOs, heads of foundations and NGOs, major philanthropists, and members of the media. To date CGI members have made more than 2,300 commitments, which are already improving the lives of more than 400 million people in over 180 countries. When fully funded and implemented, these commitments will be valued at $73.5 billion.