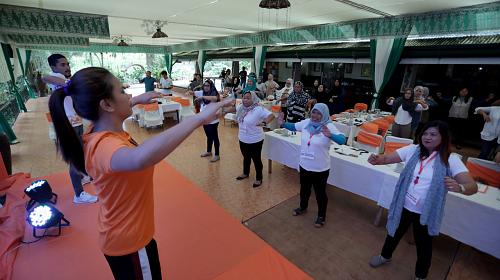 Chronic diseases are a critical but often overlooked problem in regions affected by disasters, conflict and other humanitarian challenges

ATLANTA and ABBOTT PARK, Ill., (June 17, 2019) — The global humanitarian organization CARE, the healthcare company Abbott and its foundation the Abbott Fund today announced a three-year, $1 million program to screen, diagnose, prevent and manage noncommunicable diseases (NCDs) for people who remain displaced two years after armed conflict in Marawi City, Philippines. The partnership is among the first of its kind to address NCDs in areas affected by disasters, conflict and other humanitarian challenges.

Diabetes, cardiovascular disease and other chronic diseases don’t receive enough attention in humanitarian settings, even though nearly three out of four deaths globally are caused by NCDs. Diabetes and hypertension are among the leading causes of mortality and morbidity in Marawi City and Lanao del Sur, Philippines, according to the Integrated Public Health Office in Lanao del Sur. A significant percentage of internally displaced people (IDPs) continue to be exposed to NCD risks such as unhealthy diets and physical inactivity. The Department of Health reports that one out of every three Filipinos dies before the age of 70 from NCDs.

The new health project launched on June 13 in Marawi City with a forum engaging key local stakeholders. The goal of the pilot project is to create a model for the effective management of NCDs in humanitarian settings, with a focus on management, pro-active follow up, and prevention of diabetes, hypertension and obesity (i.e., screening and identifying pre-diabetics and pre-hypertensives); strengthening the health system to successfully respond to NCDs; and community mobilization.

“Addressing noncommunicable diseases remains a neglected area in humanitarian response,” said CARE USA President and CEO Michelle Nunn. “CARE is well-positioned to fill the void, and we are confident that our partnership with Abbott and the Abbott Fund will produce key learnings for the global emergency response and development community. We expect the engagement of women, in particular, will be critical to the project’s success.”

“Through our partnership with CARE, we hope to improve the lives of people affected by noncommunicable diseases in Marawi, and to establish a new model for the effective prevention and care of chronic diseases in these challenging settings globally,” said Melissa Brotz, vice president, Global Marketing and External Affairs, Abbott, and president, the Abbott Fund.

The Marawi siege was a five-month-long armed conflict in 2017 between government forces and militant groups that forced more than 350,000 residents of Marawi and neighboring towns to flee and seek refuge in evacuation centers.

Two years later, more than 66,000 people remain displaced, with some living in eight evacuation sites in Marawi and neighboring towns and others living in transitory shelters or with relatives. Rebuilding work has yet to formally start in “Ground Zero,” the 250-hectare former battle area and the most devastated part of the city.

“The unfavorable conditions of the displaced families living in evacuation centers and transitory shelters remain a primary concern. While living in tents for two years, they have had to suffer under the hot sun and, when rain arrives, heavy downpours. Individuals living in this kind of setting are extremely vulnerable to stress and NCDs especially those who have existing health issues. They also struggle to access testing and preventive care support,” said David Gazashvili, CARE country director in the Philippines.

Program work in Marawi City and Lanao del Sur will include screening to identify people with NCDs and those at risk of developing NCDs. Nurses and other healthcare providers will be trained to lead “NCD Clubs” to advance disease prevention and management by engaging IDPs in lifestyle changes and compliance with ongoing treatment. The program also will focus on expanding access to needed clinical care either within or outside the camps, and strengthening the ability of local healthcare systems to manage NCDs. In addition, an advocacy campaign will raise awareness and educate on the prevention and control of NCDs from the community to the national government level.

The program has a strong focus on women as leaders through community engagement, screenings, referral, counseling, follow-up, monitoring, data collection and analysis. This includes identifying and engaging women at evacuation centers and shelters who may have expertise in healthcare or related fields to lead teams that map activities and run NCD Clubs.

CARE will facilitate conversations among key stakeholders including local government units, health offices, academic institutions, the private sector and leaders of the displaced population with an aim to integrate prevention and control of such diseases into policies across all government departments and levels.

To support the partnership, the Abbott Fund is providing $1 million in funding over three years. Abbott also is donating diabetes monitors and test strips to help advance efforts to address diabetes in affected communities.

“There is a need to raise awareness on the prevention and control of hypertension, diabetes, and obesity. We are committed to collaborating with various stakeholders to address these needs and support the displaced people two years after the siege,” said Aimee Mateo, CARE project coordinator.

About CARE
Founded in 1945 with the creation of the CARE Package®, CARE is a leading humanitarian organization fighting global poverty. CARE places special focus on working alongside women and girls because, equipped with the proper resources, they have the power to lift whole families and entire communities out of poverty. That’s why women and girls are at the heart of CARE’s community-based efforts to confront hunger, ensure nutrition and food security for all, improve education and health, create economic opportunity and respond to emergencies. In 2018, CARE worked in 95 countries and reached more than 56 million people around the world. CARE has worked in the Philippines since 1949 and is known for its programs on emergency preparedness and response, livelihood recovery, disaster risk reduction, climate change adaptation, innovations, gender-based violence and health. Connect with us at www.care.org, on Facebook at www.facebook.com/CAREfans and on Twitter @CARE.

About Abbott and the Abbott Fund
Abbott is a global healthcare leader that helps people live more fully at all stages of life. Our portfolio of life-changing technologies spans the spectrum of healthcare, with leading businesses and products in diagnostics, medical devices, nutritionals and branded generic medicines. Our 103,000 colleagues serve people in more than 160 countries. Connect with us at www.abbott.com, on LinkedIn at www.linkedin.com/company/abbott, on Facebook at www.facebook.com/Abbott and on Twitter @AbbottNews and @AbbottGlobal.

The Abbott Fund is a philanthropic foundation established by Abbott in 1951. The Abbott Fund’s mission is to create healthier global communities by investing in creative ideas that promote science, expand access to healthcare and strengthen communities worldwide. For more information on the Abbott Fund, visit www.abbottfund.org.