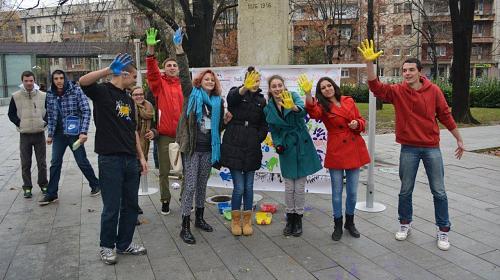 ATLANTA (Nov. 21, 2016) — A CARE program in the Balkans called “Be a Man Club” is featured in an award-winning film by Liz Mermin of the Thomson Reuters Foundation. The short documentary titled “Post-War Machismo: Be a Man” features a young man from Bosnia and Herzegovina named Dragan Kisin and his transformation from violent, rebellious teen to community leader and non-violence advocate. It was awarded the Ron Kovic Peace Prize Nov. 19 at the My Hero Film Festival in Santa Monica, Calif. According to its website, the My Hero Project uses “media, art and technology to celebrate the best of humanity, one story at a time.”

Kovic’s own story of transformation from American solider in Vietnam to American peace activist back home inspired the American war drama “Born on the Fourth of July.” He commented on his winning pick: “I selected this film because it is moving beyond violence towards peace and love. ‘Post-War Machismo: Be a Man’ is a powerful, aspiring testament to peace and non-violence in the world.” Kovic personally presented the award, which comes with a $1,000 cash prize that will expand the work of CARE’s Be a Man Club program through such efforts as increased workshops in schools, peer education opportunities and street actions related to our violence prevention campaign.

Targeting teenaged boys, Be a Man is part of CARE’s Young Men Initiative in the Balkans, promoting gender equality and non-violent relationships in a region still struggling with the legacy of war, which claimed as many as 100,000 lives from 1992 to 1995. An estimated 35,000 women were raped during that period.

Recognizing how the war produced a culture of violence — including violence against women — and bullying among youth, Be a Man engages young men who counter stereotypes and become role models for their peers. “We want to draw in guys who have had issues, especially run-ins with the law,” says Aleksander Slijepcevic, a youth coordinator for Be a Man. “It’s hard to get these guys to come to a meeting … but once you get them, they become some of the most active members, the best educators.”