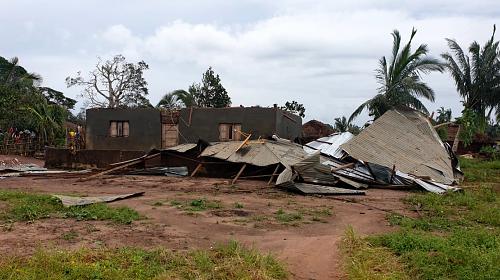 Damage from Cyclone Kenneth in Mozambique. Last week, the southern African country was struck by Kenneth, a Category 4 storm described as one of the strongest cyclones to hit Africa since modern record-keeping began. It came barely a month after Cyclone Idai killed more than 1,000 people across Zimbabwe, Malawi and Mozambique. Credit: CARE

MAPUTO/DHAKA (April 30, 2019) — As Cyclone Fani approaches India and Bangladesh, CARE experts have warned that the increased occurrences of disasters in poorer countries is saddling millions of innocent people with the “debt of climate change.”

Severe cyclonic storm Fani is expected to result in very heavy rainfall and cause significant destruction in parts of India and Bangladesh between May 3rd and 4th, weather forecasters have predicted. This comes as the toll from Cyclone Kenneth is beginning to emerge across northern Mozambique. Last week, the southern African country was struck by Kenneth, a Category 4 storm described as one of the strongest cyclones to hit Africa since modern record-keeping began. It came barely a month after Cyclone Idai killed more than 1,000 people across Zimbabwe, Malawi and Mozambique.

While no study has specifically measured how climate change affected the likelihood of these cyclones, global warming is known to intensify certain tropical storm effects. Although poorer countries in the global south – such as Mozambique and Bangladesh – have contributed the least to climate change, they are already experiencing devastating climate impacts and will bear the brunt of future global warming, according to CARE experts.

“We know that poor countries are being forced to shoulder the burden caused by fossil fuel emissions,” said Sven Harmeling, CARE’s global policy lead on climate change.  “They not only endure the worsening impacts of climate change, resulting in more frequent and intense disasters, but also face a worsening financial situation. We call on the countries and companies most responsible for the causes of climate disruption to heed our warning: if coordinated climate action is not urgently taken, poor countries will suffer even more from increasing injustice.”

Mozambique – considered one of the most indebted countries in the world – was last week granted a $118.2 million rebuilding credit facility by the International Monetary Fund (IMF) following the climate-linked cyclone Idai disaster. Though this appears generous, it still leaves the country responsible to pay off the substantial loan.

“Developed countries must immediately ramp up financial support to those suffering from these disasters and commit to fund disaster preparedness and response,” Harmeling said. “It is unacceptable to continue offering loans that result in insurmountable debt for disaster-stricken countries. The only way for the main contributors of climate change to take responsibility is to provide full support for the consequences of their actions.”

Marc Nosbach, country director for CARE in Mozambique said: “The injustice around this scenario is that Mozambique is the sixth-poorest country in the world, by the IMF’s reckoning. Most people here earn about $1.30 a day; and less than 30 percent of the population has access to electricity. It is therefore unfair to saddle this poor country with the costs of a problem they did little to cause.

“After enduring extreme weather events – like Idai and Kenneth – the people of Mozambique, are now faced with crippling debts. This must be a big wake-up call as what’s happening to Mozambique is going to continue to happen,” Nosbach warned.

Meanwhile, CARE staff in Bangladesh have serious concerns Cyclone Fani may cause destruction in the settlements occupied by Rohingya refugees.

“Cyclone Fani is heading towards Bangladesh and India from the Bay of Bengal,” said Zia Choudhury, CARE Bangladesh’s Country Director. “Its path is currently unpredictable, but landfall is expected on Saturday May 4th. The best-case scenario currently predicted is that heavy rains and strong winds are short-lived. The worst scenario will see massive destruction of homes, buildings, roads, electric lines, crops and more. Despite the high level of expertise, the government and NGOs have in preparing and responding to crises, the real concern this year is for the Rohingya refugees. Over one million people living in flimsy shelters, densely packed into a very fragile, hilly, exposed area.

“We are expecting destruction of shelters, injuries and landslides. CARE has over 500 staff and volunteers working in Cox’s Bazar. All staff are mobilized to respond fast, especially in Camps 13 and 16, where we are responsible for over 60,000 people. Goods are being prepositioned, assessment teams are ready to assess damage, and all teams are ready to rescue, repair and rebuild,” Choudhury added.

ABOUT CARE
Founded in 1945, CARE is a leading humanitarian organization fighting global poverty. CARE places special focus on working alongside poor girls and women because, equipped with the proper resources, they have the power to lift whole families and entire communities out of poverty. Last year, CARE worked in 94 countries and reached more than 80 million people around the world. To learn more, please visit: www.care.org.