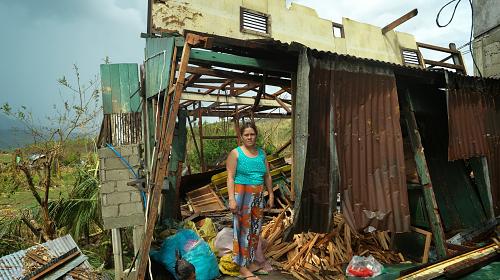 Typhoon Phanfone is compared to the destruction level of Typhoon Haiyan

MANILA (December 29, 2019) – CARE activated its emergency protocols immediately on Christmas Eve right after Typhoon Phanfone (locally known as Typhoon Ursula) made its first landfall. CARE staff, along with local partners, are assessing the situation on the ground, to provide initial relief in areas that were greatly affected by the typhoon.

“The affected people in Capiz (in the region of Western Visayas in the central section of the Philippines) are referring to this typhoon as ‘junior Haiyan’, but the massive-scale destruction caused by Phanfone is at a similar level to that of Haiyan” says Jerome Lanit, CARE’s emergency coordinator in the Philippines.

Internet access in the affected areas remains very challenging and the majority of the province of Capiz remains without electricity. “Thanks to Facebook messenger, we have been able to communicate with a CARE employee in Roxas who was able to carry out a rapid assessment of the damage,” says Lanit. “Many toilets have been damaged or submerged in the flood waters. Personal hygiene items are urgently needed, as well as food and dry clothes.”

Access to clean water is reportedly the biggest problem now, since there is no supply in almost the whole of Capiz province. There are very long lines of people outside drinking water refilling stations. Roads in Mianay, Sigma and Cogon, Panay remain completely impassable to all types of vehicles.

Structures along coastal areas were ravaged by storm surges, while those on open ground were destroyed by strong winds and flash floods. Many families whose houses have been completely destroyed, and who are not in evacuation centers either, are currently sleeping in makeshift tents, or in improvised shelters made of debris from the storm. Some are spending the night in chapels and churches, or even sleeping in their cars.

Women, as with all emergencies of this type, bear the burden of finding food for the family when crops are damaged or when their husbands are unable to fish due to damaged fishing gear and boats. They also have to multi-task in these times of extreme stress and difficulty; taking care of the children, queuing for relief goods, and continuing to carry out household chores among other things.

“While the world is getting ready to celebrate the coming new year, CARE remains concerned about those affected by this devastating emergency,” says Lanit. “People are in need of urgent support. With the holiday season and the fact that the affected areas are in the isolated, and scattered Visayas islands, far from the central government and mainland Manila, assistance is not able to get to people as fast as we would normally hope.”

About CARE’s work in the Philippines: