Report: CARE warns of a growing scourge of sexual violence against women and girls in South Sudan conflict 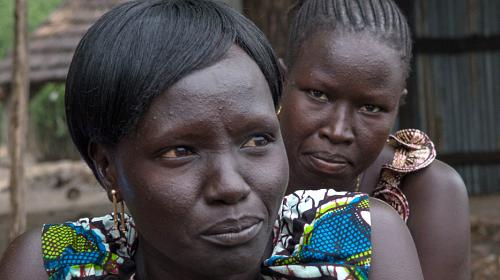 Women participate in a meeting called by CARE to discuss sanitation issues in Nimule, South Sudan, a town on the border with Uganda that is hosting tens of thousands of people displaced by violence in other parts of the country. March 28, 2014. Photo by Dan Adler / CARE

OSLO, Norway  – As the world’s donors and governments gather in Olso, Norway tomorrow to discuss how best to respond to the conflict and looming food crisis in South Sudan, CARE International warns of a wave of sexual violence that is worsening as the emergency in the country deepens.

CARE released a report today that calls attention to the fact that even before the current conflict South Sudan was one of the world’s harshest environments in which to come of age as a woman, and conditions have only deteriorated since the fighting broke out on December 15 of last year. The report, titled “The Girl Has No Rights”: Gender-based Violence in South Sudan, combines the terrible conditions that have developed in five months of fighting with data from a baseline survey conducted in the last quarter of 2013, just before the conflict started.

“The impact of the conflict on women and girls has been horrifying,” said Aimee Ansari, CARE South Sudan Country Director. “The things happening here to women and girls are evil. Women tied up, raped and then shot. Women attacked in hospitals and churches where they had fled seeking safety with their families. There is no safe place for a woman today in South Sudan.”

The report looks into widespread cultural norms and practices that result in the vast majority of girls being denied education, allow a young women’s worth to be routinely measured in cows and pressure survivors of rape to suffer in silence, which often means foregoing medical and psychological support as well as legal remedy. Apart from leaving them vulnerable to all forms of abuse, these prevailing cultural norms marginalize women from participation in any level of political activity or decision-making especially in the countryside.

With the onset of the conflict, the situation has deteriorated dangerously: more women and even girls are engaging in transactional sex to gain access to food or water for their families; parents are encouraging their daughters to marry early in order to gain access to dowry and reduce the number of mouths to feed; and rape and sexual violence has become a weapon of war.

CARE, which is providing food, water and health care to some of those left homeless by the conflict in South Sudan and who have fled across the border to neighbouring Uganda, is calling for donors to help find a lasting political solution to the crisis and an end to the violence, and for immediate funding commitments from the international community to meet the immense humanitarian needs in South Sudan. US$1.27 billion is needed now to prevent the worst, but barely more than a third of that has been raised. If action is not taken now, the United Nations warns of a famine in parts of the country. Many states are already facing severe food shortages, with CARE staff reporting people near starvation.

While and end to the violence and funding to prevent a widespread food crisis is a priority, “The Girl Has No Rights”report urges donors to immediately address the issue of sexual violence. It calls for donors to fully fund the South Sudan Gender-based Violence sub-cluster’s response plan and increase investment in and support for more effective service delivery to prevent sexual violence and support survivors, including training health professionals, social workers, and educators and community to identify and respond to sexual violence survivors with medical assistance, psychological support, and or referral services, all of which are currently in short supply in South Sudan.

“By the end of the year, if the conflict continues, it’s been predicted that nearly half of the population will be displaced by the conflict or suffering from hunger, and thousands more will die from violence or hunger,” said Kjell Stokvik, National Director of CARE Norway, who will be attending the Oslo conference. “And some of the most vulnerable, women and girls, will be suffering in silence the horrors of this conflict, unless the world acts. Rape and sexual violence leave scars on a community that endure long beyond the end of a conflict. This has to stop now.”

Founded in 1945, CARE is a leading humanitarian organization fighting global poverty. CARE has more than six decades of experience helping people prepare for disasters, providing lifesaving assistance when a crisis hits, and helping communities recover after the emergency has passed. CARE places special focus on women and children, who are often disproportionately affected by disasters. To learn more, visit www.care.org. CARE has been operating in Southern Sudan since 1993, initially providing humanitarian relief to internally displaced people in Western Equatoria. The signing of the Comprehensive Peace Agreement in 2005 allowed CARE to expand into Jonglei and Upper Nile States to support returnees from the refugee camps, and the organization has since broadened its operations to include development programs.

BSIC is improving the health, safety and working conditions of beer promoters by setting industry standards.

To Be Well At Heart

A CARE-authored article in the War and Trauma foundation that deals with the impacts of conflict on women's well-being and how working...

Read about the Young Men's Initiative in the Balkans and what we're learning about how working with men and boys can lead to women's equality in families and communities.

Outlines the major findings of the Great Lakes Advocacy Initiative in Burundi, Rwanda, Uganda and the DRC from 2009 to 2013.

DRC, Micro-Savings and Survivors of Violence

Village savings and loans groups within a holistic socio-economic approach to helping survivors of sexual and other forms of gender...

An Advocacy Guide for Grassroots Activists in Burundi

One-Stop Model of Support for Survivors of Gender-Based Violence

Preventing and responding to GBV is an integral part of CARE’s commitment to promoting gender equality and ending poverty.

From 2007-2012, CARE International in Benin, implemented a project called EMPOWER—Enabling Mobilization and Policy Implementation for Women’s Rights. This project, funded by the US government through the US Agency for International Development (USAID) aimed to galvanize a national response to GBV by strengthening support services for survivors and improving policies and laws on gender-based violence and women’s rights more broadly. This brief highlights the experiences and lessons learned from the advocacy and social mobilization work done through this project to rally support for passage of a new anti-GBV law and to increase access to assistance for survivors.