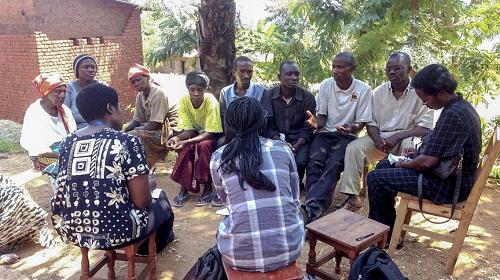 A community group of women and men, members of a Village Savings and Loan Association, meet in a village in Burundi, where VSLAs economically empower members to take control of their finances and futures.

ATLANTA (March 8, 2016) – The Bill & Melinda Gates Foundation announced today that it has awarded CARE three grants as part of Grand Challenges, a family of initiatives fostering innovation to solve global health and development problems, particularly as they support the lives and well-being of women and girls worldwide. Totaling nearly $6 million, the funding will support three CARE projects designed to promote gender equality through programming in areas such as financial inclusion, agriculture and nutrition, and adolescent health and development.

In Uganda, for example, a funded project features digital “sub-wallets” as a means of bridging a digital divide between women and men. It does so not only by expanding women’s access to digital technology – and mobile banking in particular – but also by promoting greater access and control of their own finances, as well as helping families make sound financial decisions for their own future.  And that can be transformative for a whole household’s future.

“The digital sub-wallets effort will help close a gender gap within the household,” said Lauren Hendricks, who heads up CARE’s financial inclusion program called Access Africa. “Women often are responsible for managing family finances in terms of paying bills and meeting basic needs, yet they often lack an equitable voice at their family’s financial decision-making table. Digital sub-wallets are one tool to help connect that disconnect.”

Other CARE programs benefiting from Grand Challenges funding include:

A Win-Win for Gender, Agriculture and Nutrition: Testing a Gender-Transformative Approach from Asia in Africa (Burundi)

Targeting the agricultural sector, this four-year research program will test an innovative approach to gender equality by countering gender discrimination through community dialogue and action. One goal is – by promoting gender equality – to enhance economic well-being and food and nutrition security among women farmers.

Integrated into existing life skills and sexuality education curriculum, Umodzi will target an equal number of boys and girls in grades six through eight, seeking over a two-year period to establish gender-equitable attitudes and behaviors among them, to improve health knowledge and self-care practices and to enhance inter-generational relationships between men and boys and women and girls.

“I am so pleased to have this opportunity to learn what works in order to transform not just the lives of women and girls, but the structures, habits and norms that perpetuate gender inequality for future generations,” said Doris Bartel, senior director for CARE’s Gender and Empowerment unit. “We are lucky to have impressive research and implementation partners on the ground in each of these three countries. Working together, I am convinced we can leverage incredible social change.”

Founded in 1945 with the creation of the CARE Package®, CARE is a leading humanitarian organization fighting global poverty. CARE places special focus on working alongside women and girls because, equipped with the proper resources, they have the power to lift whole families and entire communities out of poverty. Our seven decades of experience show that when you empower a girl or woman, she becomes a catalyst, creating ripples of positive change that lift up everyone around her. That’s why women and girls are at the heart of CARE’s community-based efforts to improve education, health and economic opportunity for everyone. We also work with girls and women to promote social justice, respond to emergencies and confront hunger and climate change. Last year CARE worked in 95 countries and reached more than 65 million people around the world. To learn more, visit www.care.org.

About the Bill & Melinda Gates Foundation

Guided by the belief that every life has equal value, the Bill & Melinda Gates Foundation works to help all people lead healthy, productive lives. In developing countries, it focuses on improving people’s health and giving them the chance to lift themselves out of hunger and extreme poverty. In the United States, it seeks to ensure that all people—especially those with the fewest resources—have access to the opportunities they need to succeed in school and life. Based in Seattle, Washington, the foundation is led by CEO Sue Desmond-Hellmann and Co-chair William H. Gates Sr., under the direction of Bill and Melinda Gates and Warren Buffett.

About the Grand Challenges Initiative

Grand Challenges is a family of initiatives fostering innovation to solve key global health and development problems. In 2003, the Bill & Melinda Gates Foundation launched Grand Challenges in Global Health, which came to include multiple funding partners. This initiative focused on 14 major scientific challenges that, if solved, could lead to key advances in preventing, treating, and curing diseases of the developing world.