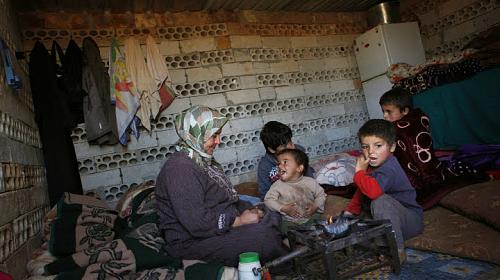 Almustafa's family near Mafraq. Mr. Yaser Hasan has a wife and 7 children who entered Jordan in Summer of 2012. Photo: Harry CHUN / CARE

AMMAN, Jordan (April 15, 2014) Half a million Syrian refugees living in urban areas in Jordan are struggling more than ever to cope with inadequate housing, high debts, rising costs of living and educational challenges for their children, CARE has found in a new study.

According to CARE’s household assessment of more than 2,200 Syrian refugees, 90 percent of the refugees are living in debt to relatives, landlords, shopkeepers and neighbours and rents have increased by almost a third in the past year.

The insecurity to provide for their families causes increasing levels of stress and sets women at risk of sexual exploitation.

In many cases, young sons become the family’s breadwinner to make ends meet. CARE’s study shows that only 52 percent of Syrian refugee boys are currently attending school (compared with 62 percent of girls).

While this is an improvement to CARE’s findings in last year’s urban assessments, where 40 percent of children were enrolled in school, the current number is still too low. Being pulled into the workforce usually means being pulled out of school. Hundreds of thousands of school children have lost up to three years of education. We are losing an entire generation of children, the most critical investment for Syria’s future.

“Three years after the Syria crisis started refugee families are becoming more and more destitute, “ said Salam Kanaan, CARE Jordan’s Country Director. “The longer they live in neighbouring countries, the more financially vulnerable they become. Families have fled months or years ago, they do not have any savings anymore.

More than 80 percent of the refugees in Jordan do not live in camps, but in poor neighborhoods in the urban areas or the outskirts of Jordan’s cities, often in inadequate dwellings, informal tented settlements and makeshift shelters. Often they have to share tiny, run-down flats with more than one family. Families have to spend an average of USD $260 per month for rent. For refugees, who have difficulties and high expenses obtaining a work permit in Jordan, being able to pay for rent is one of the most pressing concerns.

Some 36 percent of the families registered with CARE are headed by women. They have fled without their husbands who are either still in Syria, injured or have been killed. They have to take care of their young children and older relatives, but have difficulties to generate income.

CARE has also found that the social and psychological impact of war on families is increasingly worrying, particularly for refugees who have been displaced for years and have no more assets.

The study shows that the influx of Syrian refugees increasingly impacts Jordanian host communities, who are battling with the same challenges – increased accommodation and living costs, and access to outstretched public services. About 20 percent of the interviewed most-vulnerable Jordanian families said that they struggle to meet their food needs.

“A lot of support has been provided by the international community as well as the host communities. However, with no end of this crisis in sight, Syrian refugees and vulnerable host communities continue to need our support, otherwise millions of people are further pushed into poverty and destitution,” says Kanaan.

The research team interviewed 384 Syrian and Jordanian families in Amman, Irbid, Mufraq, and Zarqa, and conducted 17 Focus-Group Discussions with 157 Jordanian and Syrian women, men, and teenage boys and girls across the four areas. In addition, data of 1.262 Syrian families registered with CARE was analysed.

Founded in 1945, CARE is a leading humanitarian organization fighting global poverty and providing lifesaving assistance in emergencies. CARE places special focus on working alongside poor girls and women because, equipped with the proper resources, they have the power to help lift whole families and entire communities out of poverty. CARE has been working in Jordan since 1948. CARE Jordan has extensive experience working with refugees, providing livelihood training and opportunities, emergency cash assistance, information sharing and psychosocial support to Iraqi refugees since 2003.

CARE’s provision of life-saving services to Syrian refugees and host communities in Jordan, Lebanon and Egypt and to people affected by the crisis in Syria has already reached more than 290,000 people. In Jordan, CARE provides Emergency Cash Assistance for refugees so they can pay for basic living costs, including rent, medication and food. CARE assists with vital information on how refugees can access further health, legal and social support and provides psychosocial assistance to women, men and children.

CARE Lebanon repairs water and sanitation infrastructure, provides health education sessions, works with municipalities to improve water supply and sanitation infrastructure for refugees as well as for host communities. Syrian volunteers, who are refugees themselves, are an integral part of CARE’s Syria Response. Alongside Jordanian and Lebanese volunteers, they assist in organising and preparing distributions of relief items.

During the winter months, CARE helped families in Jordan and Lebanon to prepare for and cope with the cold winter, distributing cash, heaters, fuel vouchers, blankets and floor mats. CARE Egypt has started raising awareness among the refugees of sexual exploitation and other forms of gender-based violence to protect them from any form of abuse. Our support to families affected by the crisis in Syria is based on humanitarian needs alone, no matter which religion, political affiliation or ethnicity people belong to.