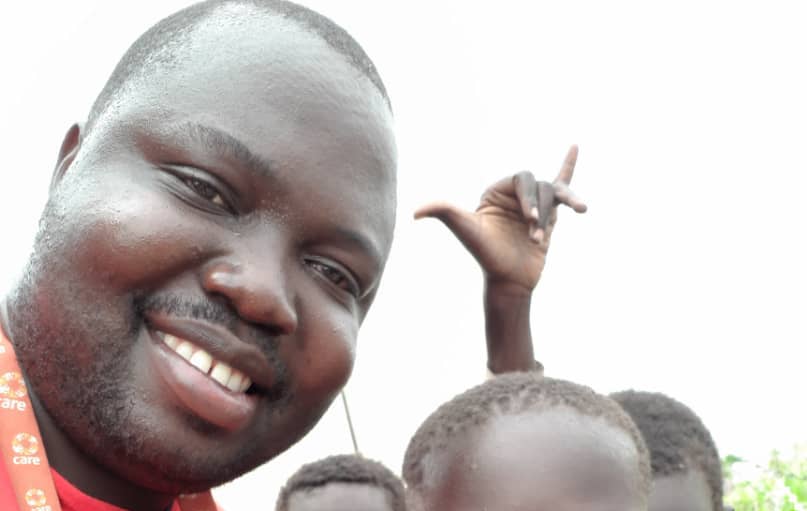 Since I was young, I defended those who could not stand up for themselves. More than once, I confronted others in school to stop bullying young girls. This never made me very popular, but I just couldn’t stannd to see others suffering.

I grew up with this trait, it is what inspired me to become a gender expert. Today, I am working with CARE as a gender and protection manager to fight for women and girls’ rights in South Sudan.

For hundreds of years, women and girls were not encouraged to take on greater roles in South Sudan. Women are not included in discussions about critical issues even though the issues affect women more than anyone else. Peacemaking and conflict resolution in South Sudan are still pretty much a man’s world.

I dream of a South Sudan where all people are treated fairly and equally irrespective of their gender or where they come from.

My job is to empower women and girls to claim their rights. Empowerment means enabling more women and girls to take greater responsibilities in their communities and voicing their concerns on broader issues of interest. It is quite a challenge as there are not many women role models to inspire young girls to believe in themselves.

Most women and girls in South Sudan leave school early and do not attend university. The cultural and structural setup of our society does not value women’s rights, and decisions are often in favor of boys. Education opens so many doors including opportunities for employment. If that happens, the women and girls in South Sudan will have financial independence and an opportunity to live a life free from all forms of gender-based violence.

Child marriage is a very contentions issue in our country that I often must confront. Many girls have seen their futures crumble because they marry early to escape poverty. In the worst instances, they are forced to marry wealthy old men so their parents can get dowry.

My work as a gender specialist is exciting while at the same time challenging in the context of South Sudan, where millions of people are in need and have been suffering from more than four years of civil conflict. People fear their old ways are being challenged. This is why we always first talk with the community leaders and speak with them about human rights and gender equality. It takes time to change behaviors, but most of the time they understand why change is needed. With their support, we are also able to convince the communities to abandon such cultural practices.

Although there is still work to be done, people are opening up to new ideas. However, it takes courage to convince people, especially those in conservative communities, to accept that a girl is equal to a boy.

For all my work and sacrifices, I would like to see a South Sudan where girls are able to pursue their education to achieve their potential and influence decisions at the family and household level. This is the only way women and girls can become empowered. This is also the only way South Sudan can become a place of peace and prosperity.

I dream of a South Sudan where all people are treated fairly and equally irrespective of their gender or where they come from. It’s a tall order, but I will work hard to see this come to fruition. Thousands of humanitarians are working day and night to make this a reality. When this happens, I will say I have ably contributed to a country that not only truly respects the rights of women and girls, but also supports them to realize their potential.

For World Humanitarian Day 2019, we’re sharing perspectives from CARE’s humanitarian workers around the world. Patrick works as a gender specialist for CARE South Sudan, addressing girls’ education, child marriage and power structures that ignore the voices of women and girls.

I dream of a South Sudan where all people are treated fairly and equally irrespective of their gender or where they come from.