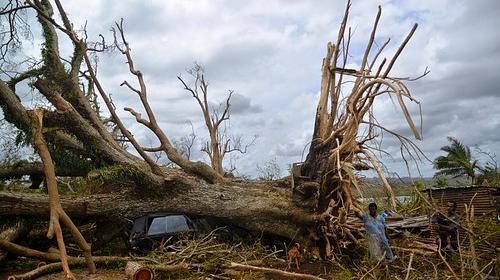 CARE served as a great resource to media covering Cyclone Pam that devastated the Pacific island of Vanuatu in March. Reporters from CNN to Bloomberg Businessweek interviewed CARE staffers on the ground in the little-known and remote island to provide real-time updates and give detail on the humanitarian response. Below, find a few examples of coverage.

In a Mar. 13 CNN article, CARE Vanuatu’s program director Inga Mepham, was quoted, “The strongest thing they’ve got is cement churches. Some of them don’t have that. It’s hard to find a structure that you’d thing would be able to withstand a Category 5 (storm).”

On Mar. 15, CARE’s Tom Perry was quoted in a CNN article titled, “Aid workers scramble to help Cyclone Pam victims in Vanuatu”. In regards to aid activity in the region, Perry said the following, “In Port Vila, there’s a lot of activity now – people are starting to emerge. You can see trees that are strewn across roads being chopped down. The evacuation centers are beginning to be set up.”

On Mar. 15, some of the first images of the destruction were captured by CARE staff and appeared on Buzzfeed.

On Mar. 16, NBC News ran an article titled, “Vanuatu Struggles to Recover From Cyclone Pam” that featured several photos of the devastation taken by aid workers—a photo of boats piled on top of each other in Port Vila was one of the featured photos taken by CARE’s Inga Mepham.

On Mar. 16, CARE’s Tom Perry, who arrived on one of the first Australian military flights into Port Vila, told the New York Times “it’s hard to find a building that has not been damaged”.  During his phone interview, he also mentioned that aerial surveys will begin, but some of the airstrips are very close to the ocean and may also be damaged.