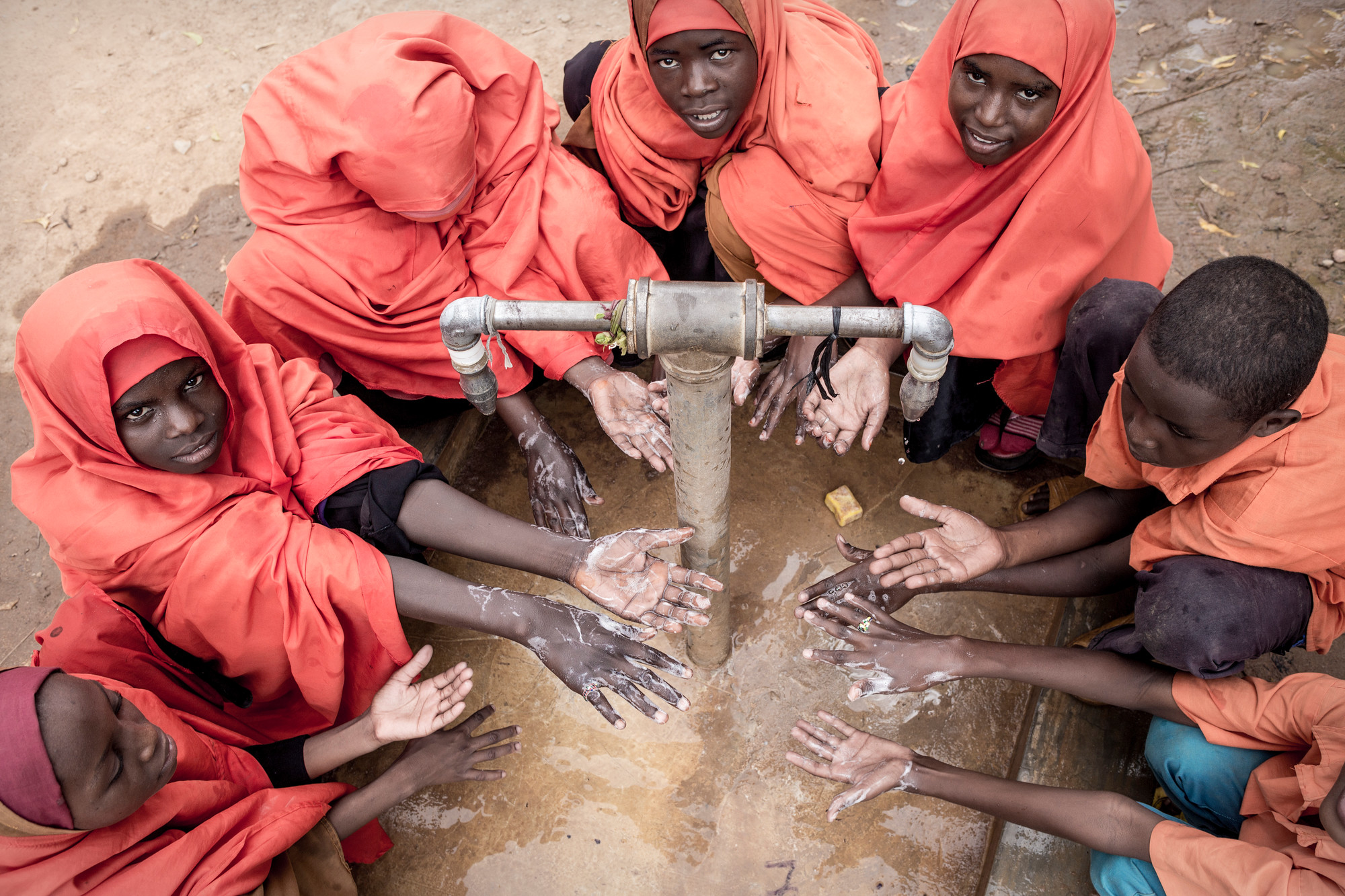 As coronavirus cases rise in Kenya, officials take precautionary measures to prevent the virus from spreading to the country’s refugee camps.

As countries around the world grapple with the coronavirus pandemic, refugee camps in Kenya are preparing for a potential outbreak.

Kenya had recorded fewer than 1,000 positive cases of the coronavirus and 50 deaths as of May 18, 2020. No positive cases have been reported in either of the country’s two refugee camps, Dadaab and Kakuma.

A United Nations High Commissioner for Refugees (UNHCR) spokesperson in Kenya, Eujin Byun, says the UN agency had a “significant reduction” in the number of refugees traveling to Dadaab in recent months. This is due to border closures of surrounding countries, particularly South Sudan, which closed its borders in March. Newly arriving refugees were put in 14-day quarantine before being admitted to the camp.

Within both camps, CARE, UNHCR and other humanitarian organizations have adjusted in response to the pandemic. Schools and community centers in the refugee camps closed, and social gatherings such as religious services have been banned.

“Humanitarian staff stopped moving in and out of Dadaab as of March 31, making the selfless decision to not see their friends and families in order to keep helping the population of Dadaab,” says CARE Kenya Country Director Philippa Crosland-Taylor. “Now host communities outside the camp won’t be able to commute for business or see their families, and refugees cannot even make the decision to return home due to these latest movement restrictions.” 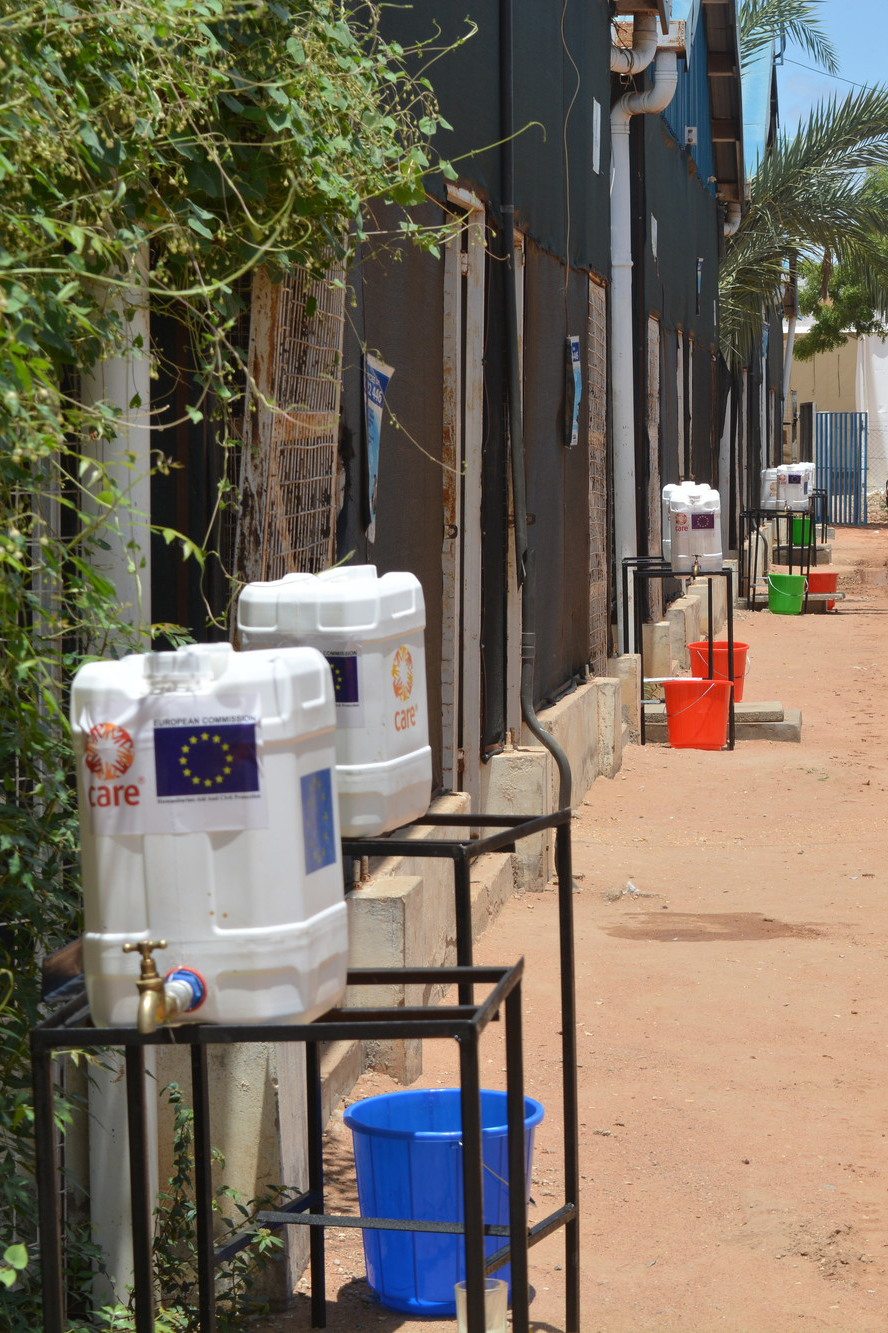 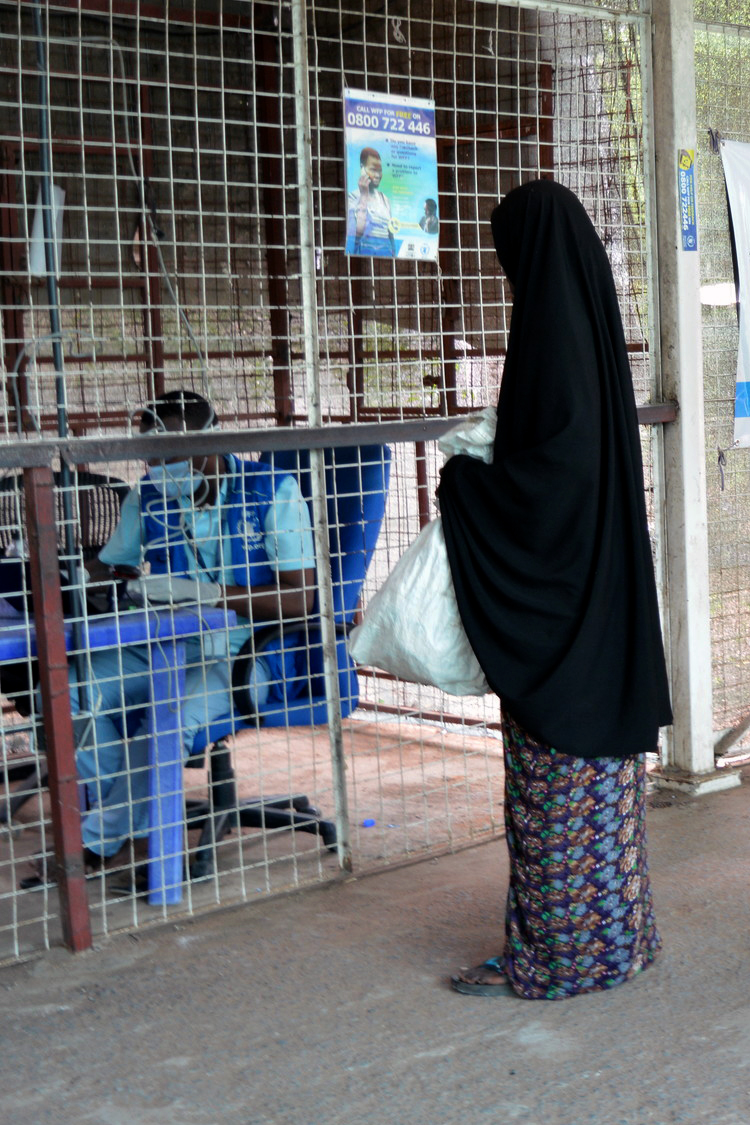 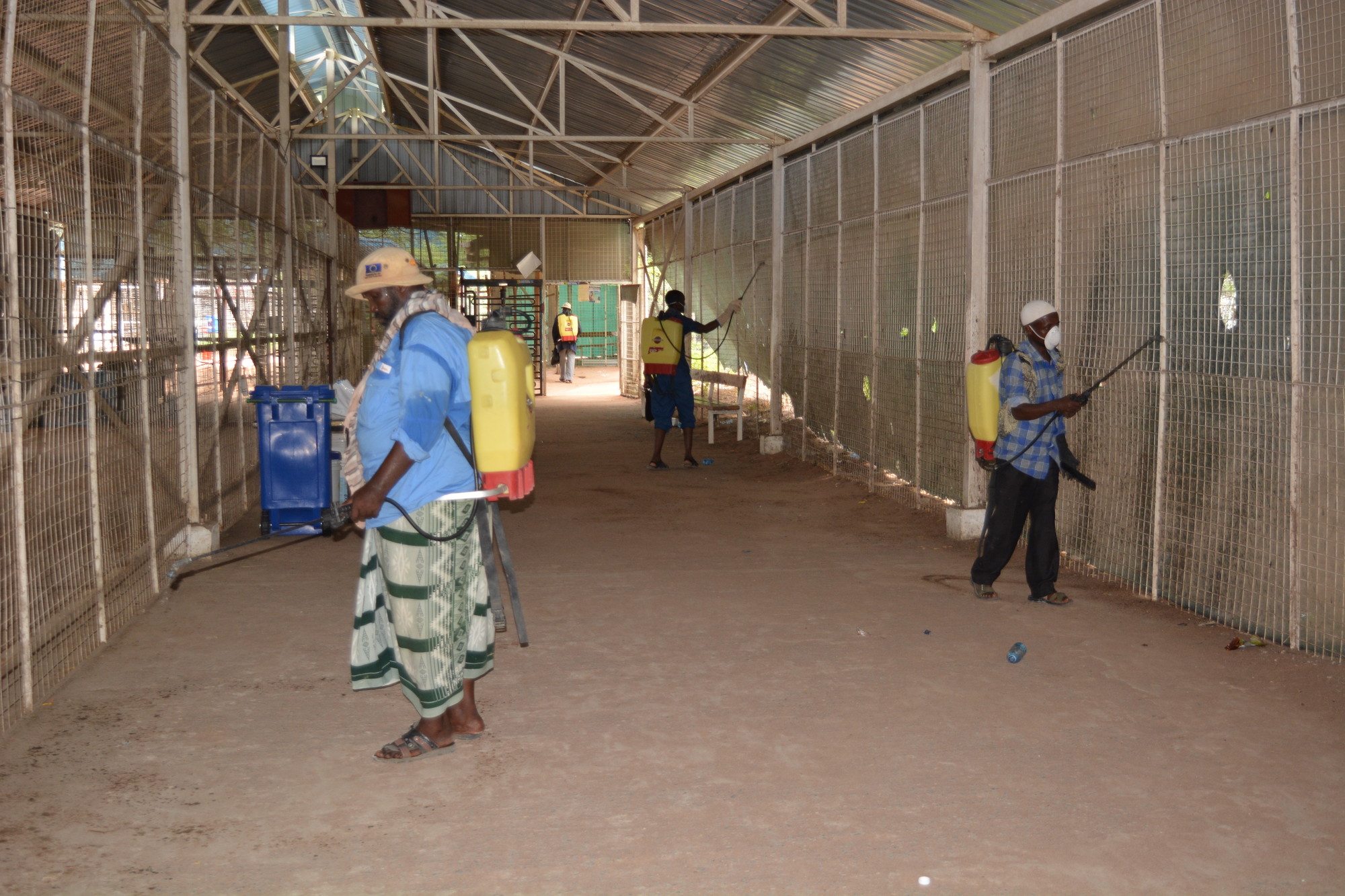 By the end of April, CARE had reached nearly all of Dadaab’s inhabitants as well as host communities with much needed water supply. CARE has also distributed soap and helped with hygiene trainings on handwashing methods. Photo by CARE

Twenty-five-year-old Muridi Zuriberi came to Kenya from Somalia in 2004 with his uncle. Since then he’s gotten married and is now the father of a newborn. He lives with his family in Dadaab and, until recently, worked as a day laborer. Muridi is now unemployed due to the pandemic, like so many millions of others around the world.

“Life has become really hard. Businesses are collapsing, so even getting basic items has become hard. We are now forced to adjust to a situation where people can only have two meals a day instead of three,” he says.

Nhial Deng, 21, fled Ethiopia 10 years ago and has spent the last decade living in Kakuma refugee camp. Since Nhial arrived at the camp alone, he was assigned a family to stay with, and moved in with friends upon completing high school. He currently lives in a five-room compound with 18 people. He shares a room with 6 people.

“We share basically everything: food, water, and we sleep together,” Nhial says.

Living together has been particularly tough during the partial lockdown as there isn’t much space or privacy. Yet, Nhial says they’re luckier than others in the camp, as they have electricity and a TV to watch the news.

This has helped keep him informed during a time when he says there is limited access to factual information due to community centers being closed, which is how many people accessed the Internet for free.

“People are spreading rumors like taking hot water and eating garlic [will] prevent the virus,” Nhial says. In response, he is working with a group of friends to design posters in various languages about the coronavirus to hang throughout the camp.

While those living in the camp have been informed to take precautions such as social distancing, he says it isn’t always possible given their close living quarters.

“I think it’s really difficult because even when you go to the street, you will find very many people so you cannot observe social distancing,” he explains.

Eujin agrees that while distancing is recommended, “It’s not going to be easy because of… their proximity and crowded areas.” 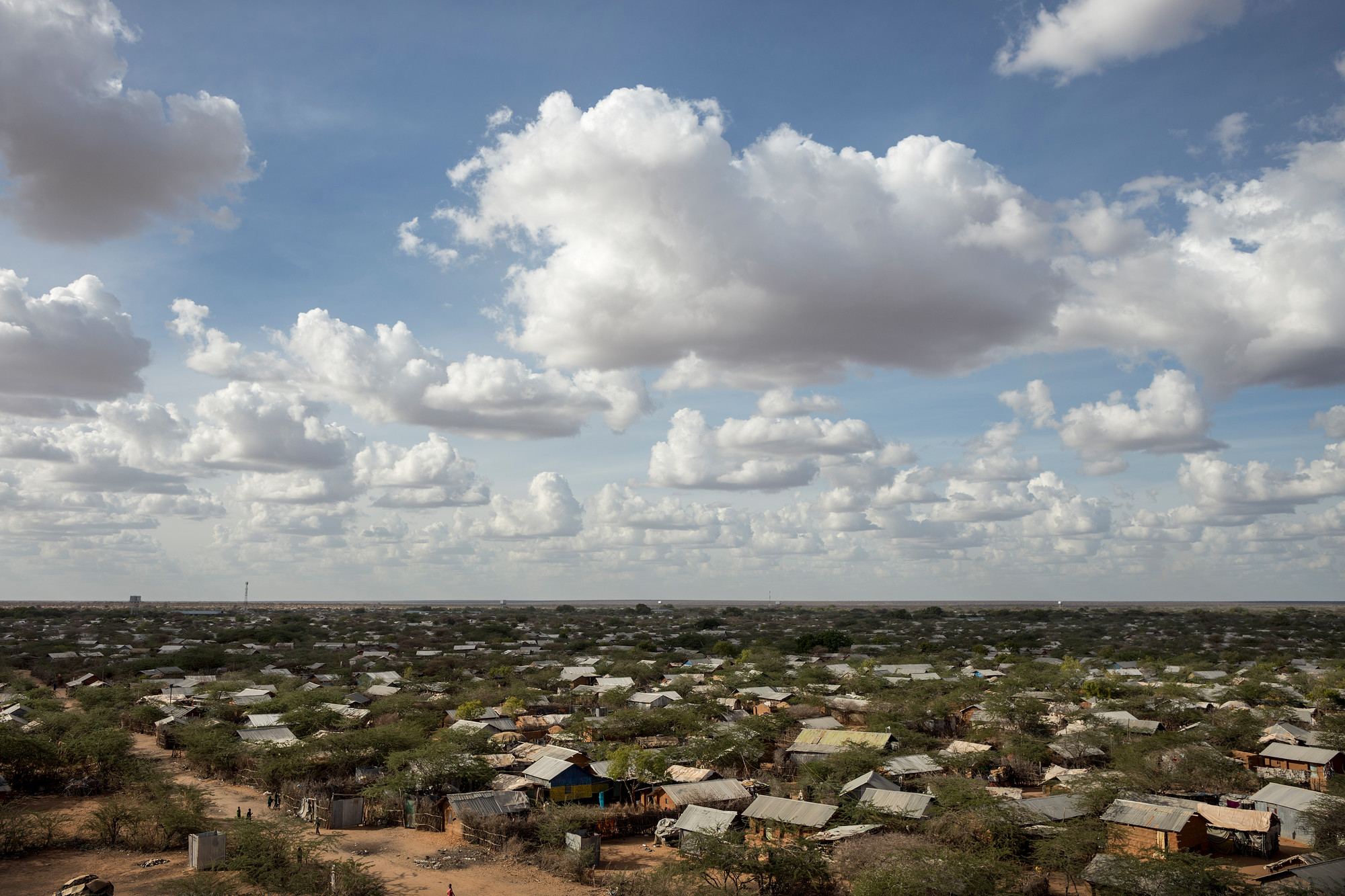 Dadaab Refugee Camp from above. Photo by CARE/Sven Torfinn

But she says other measures have been taken to avoid public gatherings. Typically, refugees receive bi-weekly food distributions. Due to the virus, food has been distributed for the next two months, which eliminates standard practice of lining up to receive food. Supplies of soap and jerry cans have also been distributed for the next six months to support more frequent handwashing.

While refugees take precautionary measures, they are concerned about a lack of resources to deal with the virus if it reaches the camp.

“Personally, I’m worried about it,” Nhial says. “I don’t think we would be able to cope with an outbreak in the camp, it would be out of our control.”

Muridi agrees. “When I listen to the news around the globe a lot of lives are being lost daily. And this is amongst people who have got everything they need in life,” he says. “What happens if it reaches this camp, where there are not enough health–care facilities to cope and the majority of the people live in poverty?”

At Dadaab, Crosland-Taylor says an outbreak would be “a disaster” as the camp only has quarantine capacity for 2,000 people and only one dedicated COVID-19 health facility with 110 beds for more than 270,000 people.

There are six health clinics in Kakuma camp and one general hospital, and Nhial says they sometimes struggle to provide care, even under normal circumstances. “They don’t have a lot of medicine. Sometimes you go and are told you have [a] disease, but we don’t have the medicine.”

Neither Kakuma nor Dadaab refugee camps have an intensive care unit (ICU).

By the end of April, CARE had reached nearly all of Dadaab’s inhabitants as well as host communities with much needed water supply. Water pumps are now running up to 12 hours per day. CARE has also distributed soap and helped with hygiene trainings on handwashing methods, and awareness–raising sessions. Together with the community, additional handwashing stations have been installed and broken pumps and water pipes have been fixed.

“We have to think about the worst case,” Eujin says. While isolation facilities have been set up in the camps, they are not sufficient to provide adequate care in the event of an outbreak. If COVID-19 reaches the camps, a lack of facilities, equipment, and trained frontline workers will hamper efforts to care for people.