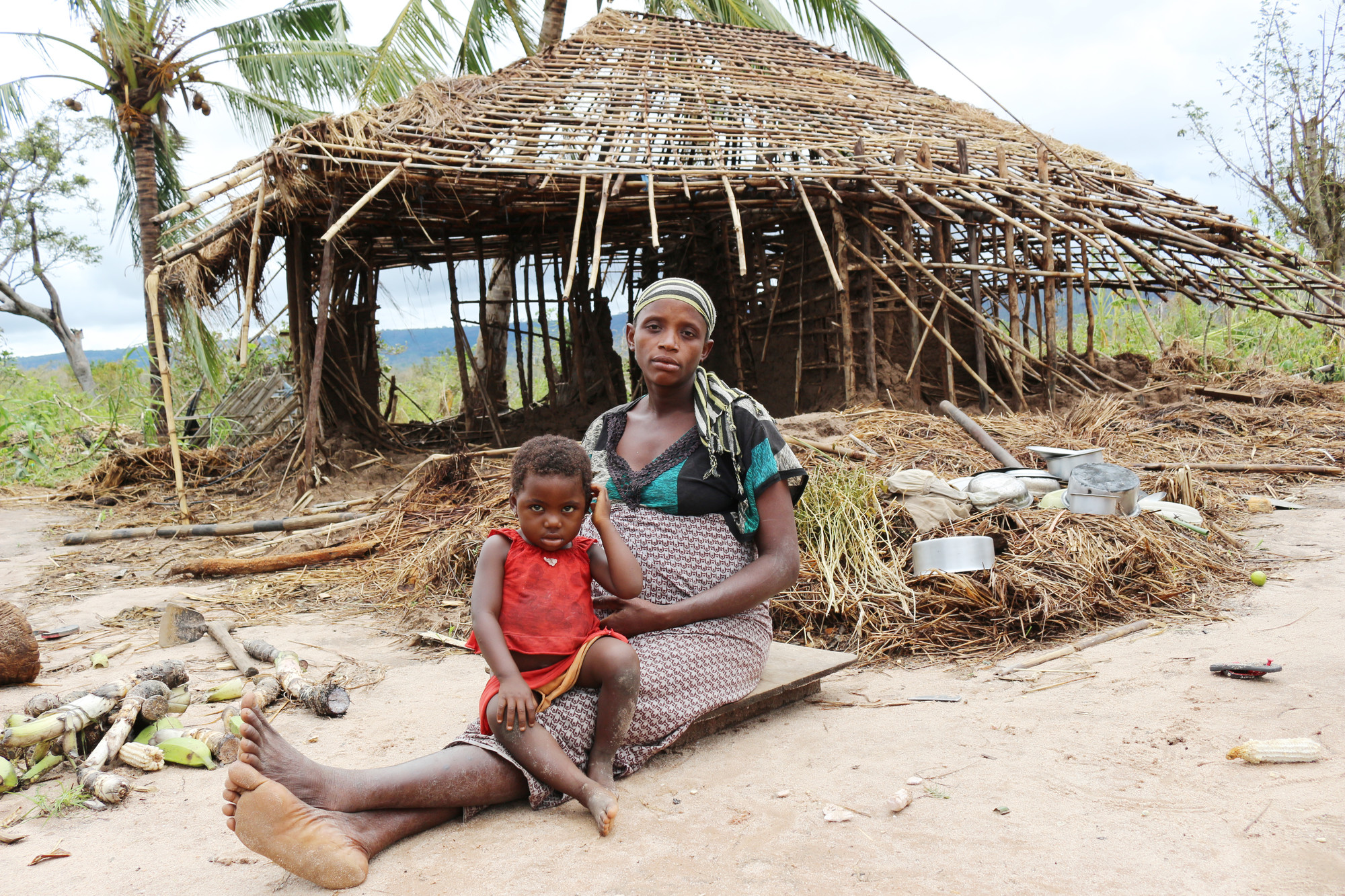 Women and children especially impacted by the massive storm

Nhamu Sufu chokes back tears as she shares how she lost her house and belongings after Cyclone Kenneth hit her village of Bangala, in Mozambique’s Macomia district, last week. Nhamu, a pregnant mother of five, used to own a three-bedroom house. Kenneth reduced Nhamu’s home to rubble.

“This is all what is left,” she says pointing at a pile of mud and sticks behind her. “We have been sleeping in the open for the past week.”

Incessant rains induced by Cyclone Kenneth continue to hamper rebuilding efforts. Many people have erected makeshift grass-thatch structures as they wait for the weather conditions to stabilize. Many are still traumatized by Kenneth and fear that their temporary homes may not hold for long as the rain persists.

Communities running out of food

Nhamu and others in her community had a good crop yield and expected a better harvest this year. But the cyclone hit before she and others were able to move their crops to storage in granaries. The little they managed to salvage is at risk of spoiling because of the wet conditions.

“I can’t take the maize for milling as it is wet. The sun is coming out for only a few minutes before disappearing again. And then heavy rains follow,” Nhamu says. “We are hungry and running out of options for food fast. We are surviving on pumpkins and yams, but they are slowly running out.”

“I don’t think we can survive like this for another week.”

“The situation is quite desperate,” says Daw Mohamed, CARE Humanitarian Director, who is coordinating the response in Cabo Delgado. “During our initial assessment early this week, we saw very hungry people. Some are crying for food as many of them didn’t eat a proper meal for two days. We urgently need more support to reach out to the affected people with lifesaving assistance.”

As flash floods continue to inundate Bangala village, most shallow wells used by the community have been submerged, raising the risk of waterborne diseases like cholera.

Nhamu’s 3-year-old daughter has already been sick from diarrhea, likely caused by contaminated water. Nhamu has started boiling their water to make it safe for drinking.

Still, the threat of mosquito-borne illness lingers. Without shelter, Nhamu and her children are especially vulnerable.

“I fear that sleeping in the open will expose me and my family to diseases such as malaria, which may bring complications later in my health as I am about to give birth,” Nhamu says.

In addition to malaria, Mozambique also has a high risk of dengue, chikungunya, and other mosquito-transmitted infections.

During the past week, CARE and its partners have distributed about 1,300 tarpaulins to families in need across the Cabo Delgado province. CARE is also bringing in more supplies including family kits, tents, and hygiene supplies to ensure that impacted individuals have the basics to survive.

The U.N. and local officials estimate that more than 700,000 people in the province were affected by Cyclone Kenneth; roughly 363,000 are children who need urgent assistance.

For now, Nhamu says her hopes are pinned on outside support.

“I don’t think we can survive like this for another week,” she says. “We need proper shelter and food. My only prayer is that well-wishers come and help me as my children haven’t eaten a proper meal for days.”