Ukraine: How to Stay Human in the War - CARE

Ukraine: How to Stay Human in the War 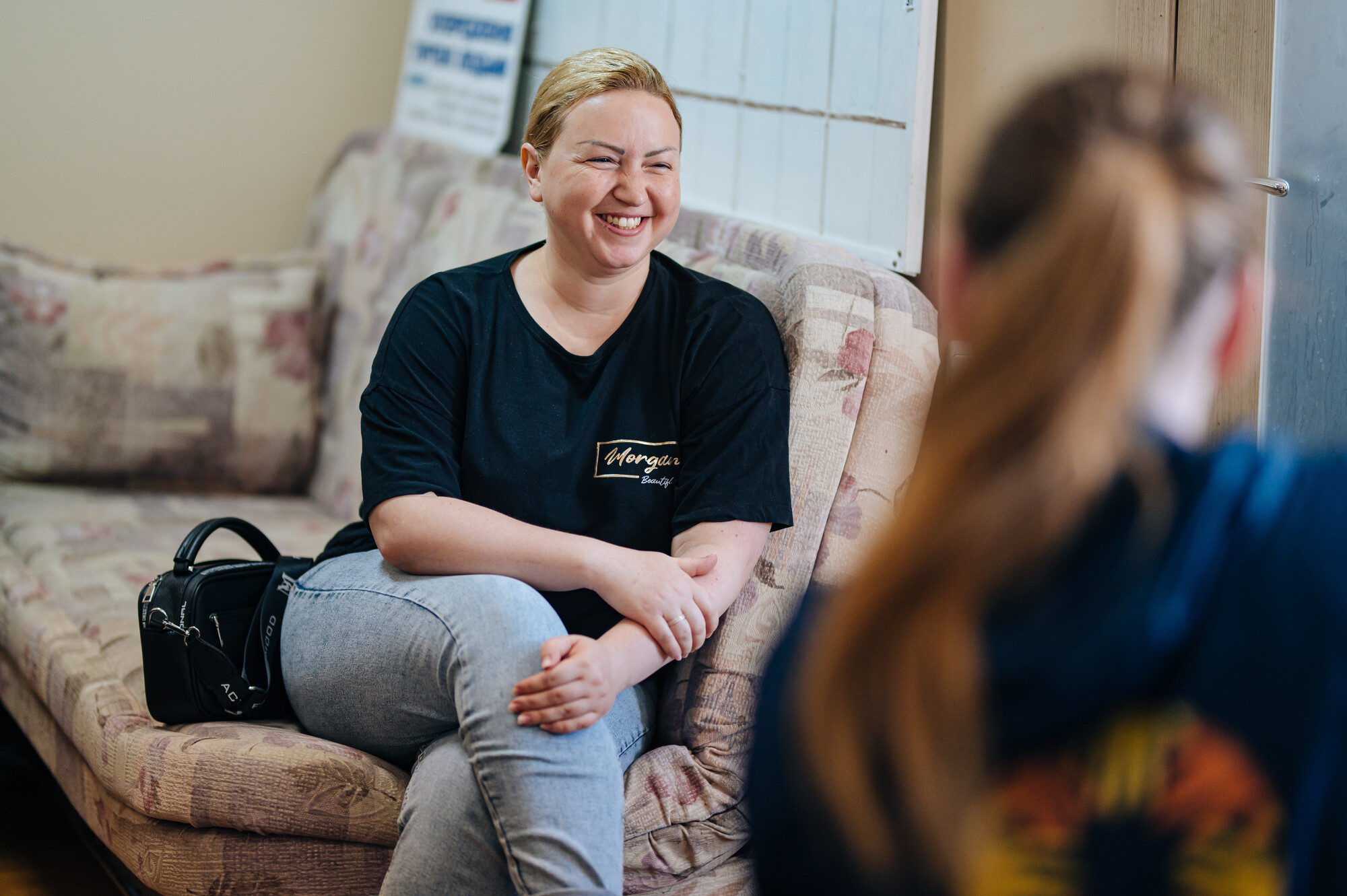 Tetyana, 33, fled with her daughter, 12, from Luhansk region to Rivne, Western Ukraine. All photos by Laura Russ/CARE

Tetyana, 33, fled with her daughter, 12, from Luhansk region to Rivne, Western Ukraine. All photos by Laura Russ/CARE

“We cried every day, because we were so afraid.”

After the war erupted in Ukraine last spring, Tetyana and her 12-year-old daughter slept underground for over two months, hoping they would not be forced to leave their home.

“It was cold in the basement. The electricity was turned off sometimes,” Tetyana, 33, says. “And we never knew when or if it would be turned back on.”

The family was in the Luhansk area of Eastern Ukraine, where the active fighting was some of the heaviest, and on May 8, they finally fled on what they said was the last bus out of the region.

“When there was only one shop left, we knew it was time to leave.”

They arrived in Rivne, a city in Western Ukraine.

Tetyana is calm now as she describes her new life there. But that was not always the case.

“I came to Rivne totally broken,” she says. “The first time there were air sirens in Rivne it was like something turned inside of me.”

Tamara, a psychologist working with a local organization supported by CARE, has been helping Tetyana talk through her experiences.

“With the psychologist I talked about what my primary fear was,” Tetyana says, “I had some practical exercises to control my negative thoughts, to stop and to turn it to the positive. Now I can deal with it better. I can talk about it. The sirens do not scare me as much.” 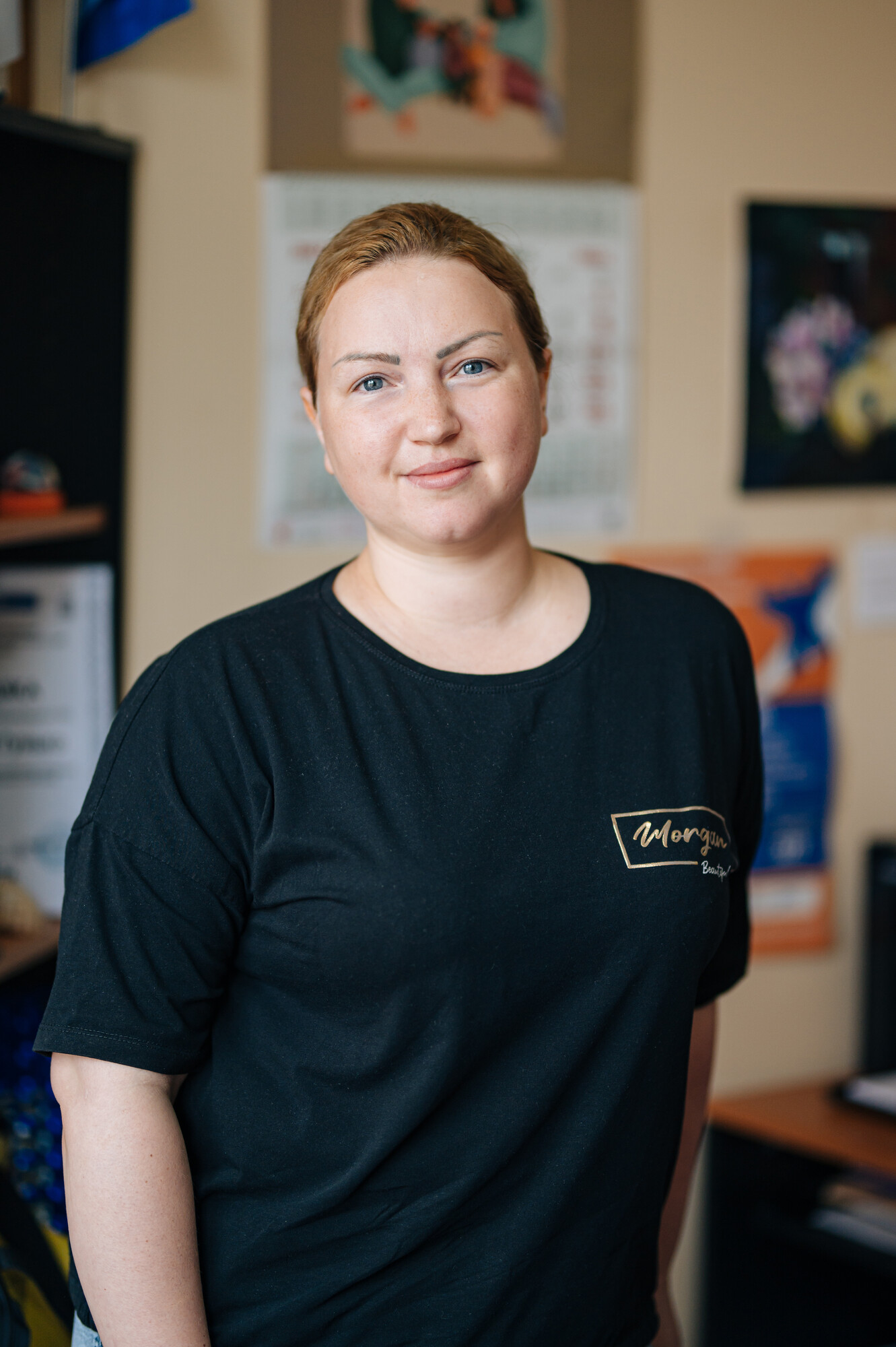 Tetyana and her daughter lived in their basement for 70 days before they fled on the last bus out of the region.

Living with an active war just outside your doorstep is difficult on a physical and practical level, but it is also difficult on an emotional and psychological level. That’s what Tamara and other groups in and around Ukraine are working to help.

“Most of my patients either live in the past or in the future,” says Tamara, “but I help them to find their now and live in the presence.”

Tamara works with internally displaced people who have fled from areas that have active fighting and who are now trying to start a normal life.

“I talk to families that arrived at the train station in Lviv when the missiles hit. I talk to children that sing loudly when the air sirens go off, to not hear them,” she says. 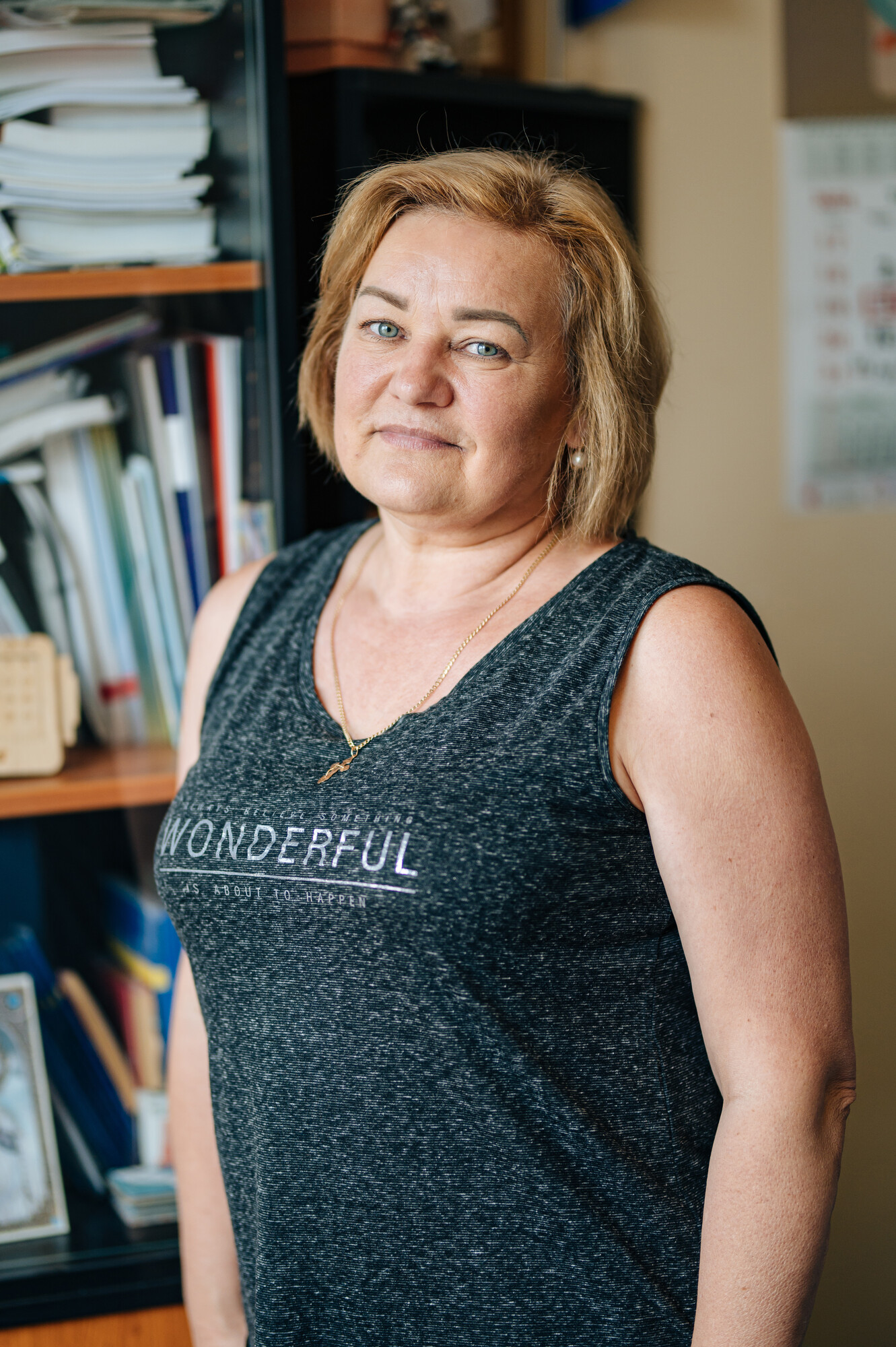 Tamara, 60, is a psychologist working with internally displaced people in Ukraine.

Tamara believes it is important to work through this fear and anxiety, for both short-term and long-term health.

In the short-term, she says, anxiety releases stress hormones and increases breathing and heart rate. It concentrates blood flow to the brain, where it is needed to deal with perceived threats like sirens and other triggers.

If the body never receives the signal to return to normal functioning, Tamara explains, long-term anxiety can cause the brain to release these stress hormones on a regular basis, increasing the frequency of headaches, dizziness, and depression. This can weaken the immune system and leave people more vulnerable to infections and illnesses. It can also affect a person’s ability to work, perform day-to-day activities, or relate to family and friends.

Tamara thinks this psychological crisis will only get worse as the war goes on.

“Most of my patients are stressed and in shock. I try and decrease their level of fear,” she says. “But I believe that it will get worse.” 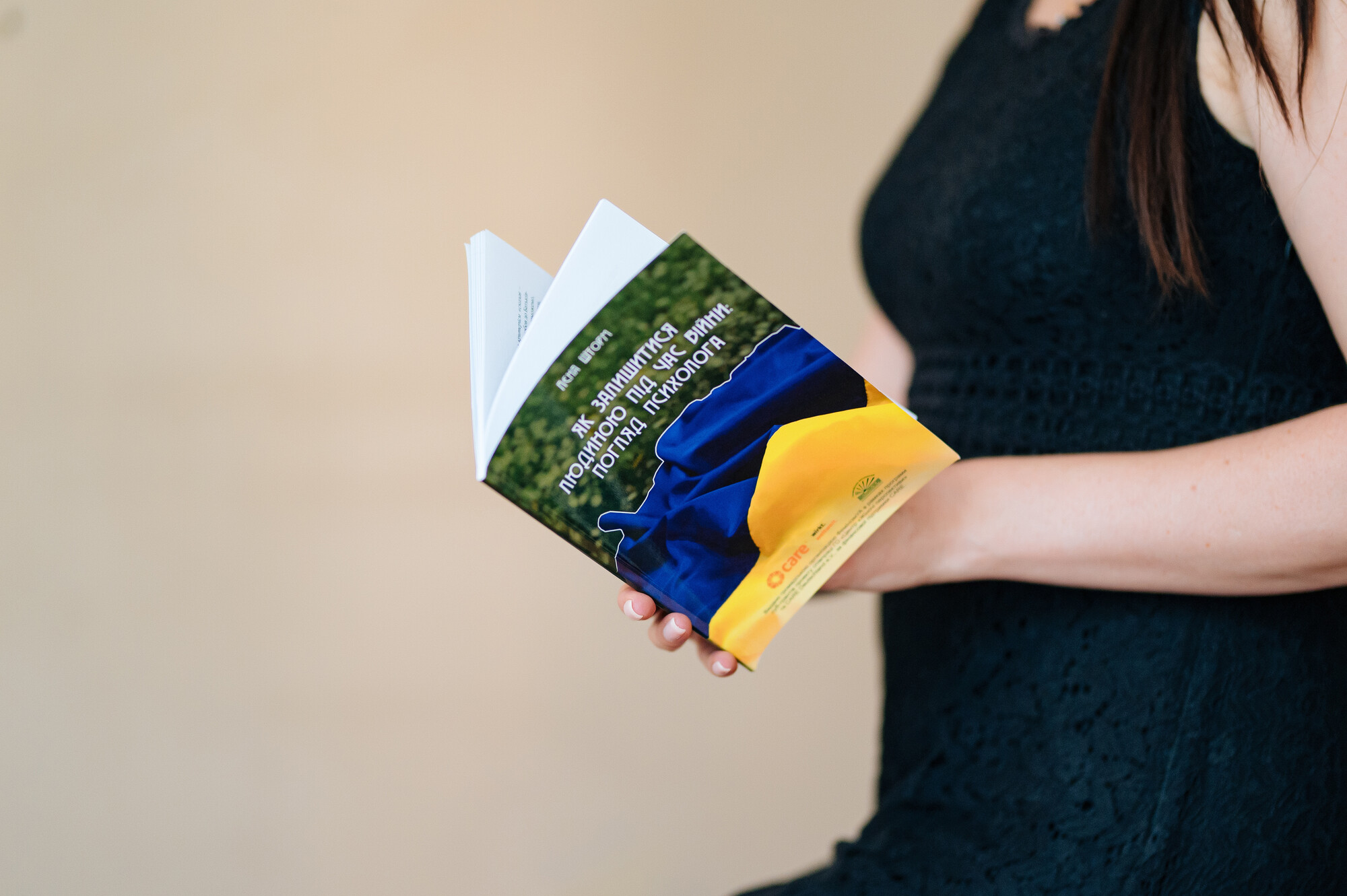 "How to Stay Human During the War" by Olena, 33, a psychiatrist in Lutsk.

But not everyone wants to talk to psychologists like Tamara.

Not everyone wants to seek help.

“There are some cases that refuse psychological support,” she says, “because there is still some stigma against it. Some of the people believe they can deal with it by themselves.”

Olena, 33, a psychiatrist in Lutsk, has worked to provide a different path forward for the people who are reluctant to seek help through services like those in Rivne.

“I wrote a book that gives answers to the most common questions on how to live with the war, because it helps to keep clients confidential,” she says.

Olena’s book, How to Stay Human During the War, answers questions about how to communicate with relatives that have fled from ongoing fighting, how to decrease stress in children, how to treat sleeping problems, and how to overcome guilt. It also addresses whether it is okay to feel hate, what to do when one feels helpless, and how not to lose hope.

With CARE’s support Olena was able to print 2,400 copies of the book to distribute free of charge for internally displaced families, and to areas where there is still active fighting. 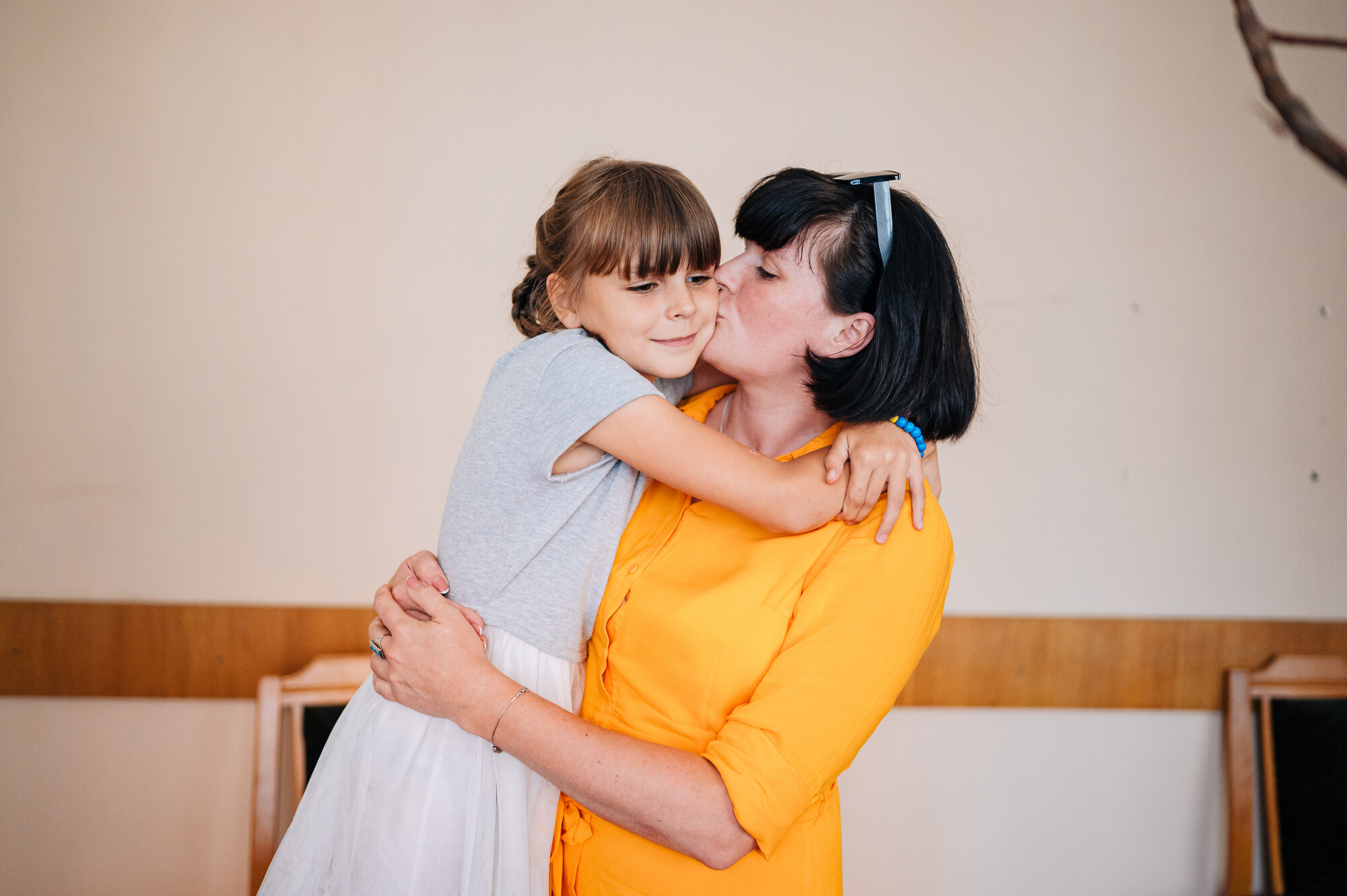 Iryna, 31, a volunteer in Lutsk, a city in Northwestern Ukraine, was struggling with guilt and the feeling of not doing enough. She wanted to stay strong for her 8-year-old daughter, Victoria, and she found Olena’s book helped her to feel more relaxed and, as much as possible, at peace.

“I learned how to rest and how to live with the guilt,” says Iryna. “I help where I can, but I must stop myself before I burn out. I must control my own fear and not panic.”

Through CARE’s work with families, women, and children who have gone through these kinds of extremes, Iryna and others have begun a journey toward healing. But the war is ongoing, and its lessons are hard.