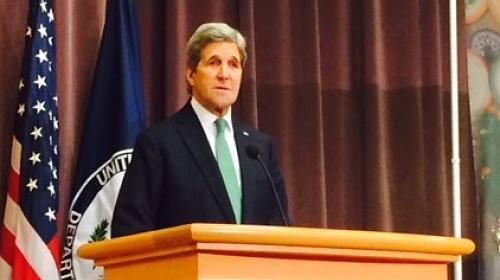 Long championed by CARE, the strategy will empower girls by helping prevent the harmful practice of child marriage.

WASHINGTON, DC (March 15, 2016) — The global poverty-fighting organization CARE applauds the release today of the U.S. Global Strategy to Empower Adolescent Girls, which will marshal the resources of the U.S. Government to work toward better educated, healthier, and more empowered girls worldwide.

Announced by Secretary of State John Kerry, the strategy caps a multi-year, multi-pronged advocacy effort, led by CARE and its partners in Girls Not Brides, to mobilize more government action to prevent child marriage across the globe. It will bring together USAID, Peace Corps, the Millennium Challenge Corporation, and the State Department to tackle this issue, along with other barriers facing adolescent girls, including often-limited access to a quality education and health and harmful practices such as female genital mutilation.

“This strategy demonstrates that the core value of equitable treatment of women and girls is and always will be a core value of American foreign policy,” said Kerry, who was joined by U.S. Ambassador-at-Large for Global Women’s Issues Catherine Russell.

Despite laws banning the practice in most countries, a girl somewhere in the world is forced into child marriage every 2 seconds. From higher maternal mortality rates to domestic violence and a greater risk of rape or HIV infection, child brides shoulder unspeakable physical burdens. Yet the damage doesn’t stop there. Early forced marriage often means early forced withdrawal from school too. And that greatly limits the future girls might otherwise have realized.

Since 2009, CARE and its allies have advocated for this strategy on grounds that such a mechanism is needed to promote inter-agency coordination around the prevention of child marriage, to ensure that U.S. foreign assistance is informed by evidence of what works and to ensure that funding is directed to programs in countries with a high prevalence of child marriage.

To that end, in the run-up to the 2012 International Day of the Girl, CARE and Girls Not Brides coalition members launched a social media and advocacy campaign targeting then Secretary of State Hillary Clinton, urging her to make political and financial commitments to address the issue of child marriage. The effort yielded more than 11,000 letters to Secretary Clinton and more than 250,000 social media actions.

More recently, readers of CARE’s 2015 report on child marriage, “Vows of Poverty,” sent thousands of letters to First Lady Michelle Obama and Ambassador Russell urging support for an adolescent girl strategy so that all girls, regardless of where they live, can reach their full potential.

“The U.S. Global Strategy to Empower Adolescent Girls is a significant step toward ensuring that girls in all parts of the world are free to pursue a life of independence, unencumbered by the harmful practice of early forced marriage,” said Michelle Nunn, CARE president and CEO. “We are grateful for the U.S. government’s leadership on this front. The strategy affirms the power of advocates who believe in the potential of girls everywhere.”