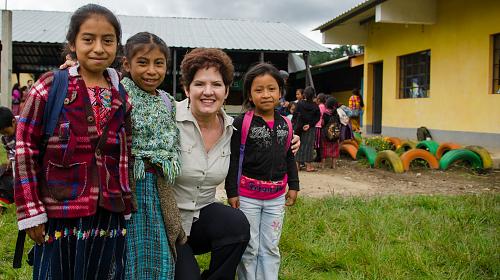 ATLANTA (November 19, 2012) – The global poverty-fighting organization CARE is encouraging Americans to join the celebration November 27 as it marks the first Giving Tuesday with a win-a-trip contest, a donor appreciation telethon and a video promoting an annual day of giving the Tuesday after Thanksgiving.

Between now and Giving Tuesday, CARE is challenging supporters to have their friends, family and social networking peers raise money to support CARE’s work. The person who raises the most money under the contest rules* wins a trip to visit one of the 84 countries where CARE works and see firsthand how CARE’s programs are lifting families out of poverty by empowering girls and women.

#GivingTuesday is a movement to create an annual, national day celebrating America’s giving spirit and encouraging charitable giving during the holiday season. CARE is committed to helping Giving Tuesday enter the public consciousness as a new “Opening Day” for the traditional year-end charitable giving season, just as Black Friday and Cyber Monday kick off the holiday shopping season.

Supporting CARE probably isn’t on many Black Friday shopping lists, and it might not be top of mind on Cyber Monday either,” said Helene D. Gayle, president and CEO of CARE. “But that’s exactly why on Giving Tuesday, in the tradition of American generosity, we’re asking people to help the world’s poorest communities lift themselves out of poverty.”

In addition to the contest, CARE’s Giving Tuesday activities include:

Jill Gordon, a longtime CARE supporter from Chicago, will be among those making a gift to CARE on Giving Tuesday. She’s hoping to do so in communion with thousands of others who will support their favorite charity, do volunteer work or simply think about the best ways to give with impact. “Giving Tuesday is a great time to reflect and learn about the needs we see around the world, figure out what causes matter to you most and give a little more than you might otherwise,” Gordon said.