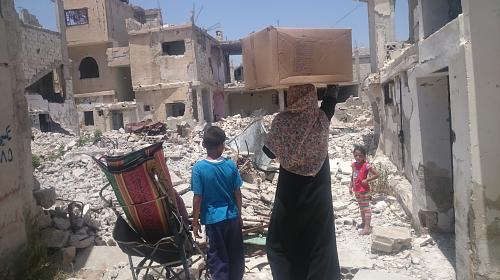 WASHINGTON (April 27, 2018) — At an international conference in Belgium this week, the United States did not pledge any funding for humanitarian aid to Syrians affected by eight years of conflict. Overall, the meeting raised $4.4 billion, but fell short of the $9 billion in assistance the United Nations estimates is needed.

“It’s very disappointing that the U.S. is walking away from the leadership role it has historically played in the region and around the world. Eight years into the Syrian conflict, more than 13 million people are in need of urgent humanitarian assistance in Syria and around a quarter of the Syrian population is displaced in surrounding nations.

Even if the U.S. eventually steps up and does the right thing—which it absolutely should do—a lot of damage has already been done. Other donor countries, Syrian civilians, aid organizations and those who have looked to America for leadership have been given the signal that the U.S. is turning a blind eye to this brutal conflict. Not to mention the decreased influence the U.S. will now have in the Middle East and around the world.”

In Brussels, CARE International issued a with nine NGOs, including Oxfam, Save the Children, and World Vision, arguing that the “conference didn’t go nearly far enough to provide adequate support to the millions of Syrians in need of assistance and who are left facing an uncertain future.”

CARE Ethiopia has implemented the CSC broadly, demonstrating its versatility across different types of programming to improve government...

Findings from the Learning Tour to Sierra Leone and Côte d’Ivoire. From May 28-June 4, a group of House and Senate congressional staffers, technical experts and a media representative, traveled with CARE, and learned about the importance of U.S. investments in maternal and child health to promote better health outcomes for women and youth in West Africa.

This 2 page brief highlights learning and results from the Malawi Health Alliance Project.

The Kuraneza project was a four-year child survival project implemented in four sectors (Kayenzi, Karama, Musambira and Nyarubaka) of the Kamonyi District in Rwanda. Kuraneza’s primary goal is to further reduce maternal and child mortality, while improving equity and efficiency in rural Rwanda.

Global Investments to End Maternal and Child Mortality in Guatemala

Findings from the CARE Learning Tour to Cambodia

Access to education about contraceptive methods and tools empowers women and men to plan their families, educate their children, and...

Sexual and reproductive health is a significant public health need in all communities, including those facing emergencies.

Tools for learning and action on gender and sexuality

CARE has been working on sexual, reproductive and maternal health programming for 50 years.

Goretti wanted a better life for her and her six children and convinced her husband to allow her to participate in a local women’s...

This publication, designed for CARE program planners and managers and focused on sexual and reproductive health, explains SAA at both a conceptual and practical level (includes description of SAA process, case studies, and tools).

Culturally-Appropriate Delivery Care: A Right of Women and Newborns

Sexual, reproductive and maternal healthcare is both a fundamental human right and a critical development issue.

Voices From the Village

Projet l’Espoir pour la Santé des Mères et Nouveaux Nés is a collaborative effort between CARE International and CARE Mali. Projet Espoir aims to improve maternal health, with a specific focus on safe delivery practices, by a combination of improving the quality of care available at local health centers and challenging social and cultural norms that inhibit women’s access to essential health services before, during and after childbirth. The goal of the project is to strengthen maternal health service delivery at both the community and primary care levels and improve the referral system in two districts (Bankass and Bandiagara) of North-Central Mali.

A look at CARE interventions in Bihar, India where poor nutrition and health lead to early death and lost potential.

Project Summary: A Call for Life

Use of mobile phone applications to promote access to obstetric and neonatal emergency care.

Complications during pregnancy and childbirth are a leading cause of death among women in developing countries.

It is important to understand the challenging situation facing Nepal’s nearly 6.6 million women of reproductive age (ages 15–49). This case study explains how we have worked with a variety of actors in Nepal — including the Government of Nepal, Health Facility Operation and Management Committees, Female Community Health Volunteers and community-based organizations — to develop a participatory governance process that fosters increased access to and utilization of maternal health services.

CARE works with communities to improve the quality and accessibility of local health services for women and newborns.

The First 1,000 Days: A Window of Opportunity for Women and Children’s Health

In January 2012, a high-level delegation, including U.S.

Community Health and Social Change: The HOGASA Project in Honduras

HOGASA has contributed to significant decreases in maternal and infant death and improved management of healthcare resources in Honduras...

As part of the LIFT-UP Initiative, funded by the Bill and Melinda Gates Foundation, CARE Ecuador conducted qualitative and quantitative study on Youth Space. The study focused on exploring the Youth Space model and assessing whether adopting health services to the specific needs of young mothers as part of a specialized, integrated health intervention leads to greater empowerment and increases the frequency of their utilization of antenatal care services.

Voices From the Village

Voices from the Village: A CARE Family Planning Project in Ethiopia

For more than 10 years, CARE has been partnering with the government of Ethiopia to improve awareness of and access to quality reproductive health services in rural communities through the Family Planning and HIV/AIDS Prevention Program, funded by the Royal Netherlands Embassy.

CARE's Life Saving Interventions for Women and Girls in Haiti project has worked to protect earthquake-affected women and girls.

Undernourished pregnant women have higher reproductive risks, including death during or following childbirth.

In this paper we highlight lessons learned from CARE’s global work in sexual, reproductive and maternal health, focusing on those areas we believe are most critical to reaching our global family planning goals.

Case Study: The Impact of Maternal Health in Peru

The empowerment of women is at the heart of CARE’s strategy to reduce global poverty and nurture the growth of healthy societies.

As the global community narrows in on the Millennium Development Goals (MDGs), there is a renewed dedication to improving the health of...

Voices From the Village: Madagascar