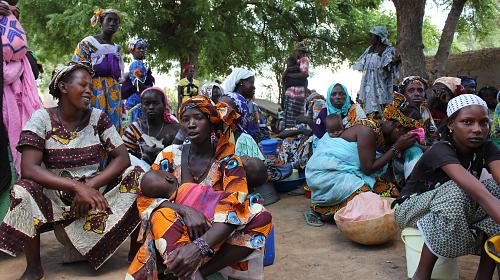 Renewed fighting and food emergency have forced nearly 375,000 from their homes

BAMAKO (January 24, 2013) – Escalating violence and an ongoing serious food emergency have intensified the humanitarian crisis in Mali. CARE is expanding its emergency response in the country and is delivering food and emergency supplies to 21,000 women, men and children in Mopti, one of the areas most affected by recent fighting. Food deliveries include rice and other fortified cereals, protein-rich legumes, cooking oil and salt. CARE is also distributing 2,000 emergency kits including tarps, blankets, sleeping mats, soap and kitchen utensils.

“Although there has been a lot of focus on the security crisis in Mali, it is important to remember the humanitarian crisis,” says Claudine Mensah Awute, country director for CARE Mali. “Thousands of people are on the move, and there have even been cases of unaccompanied children arriving in the city. Others are hiding in their homes without water, food, or any connection with the outside world.”

An estimated 375,000 Malians have been forced from their homes due to violent conflict and a food emergency that affected the entire Sahel region of West Africa beginning last year. With fighting once again intensifying in northern Mali, nearly 10,000 people have been newly displaced from their homes in the past two weeks alone. CARE has asked for the expansion and protection of the humanitarian space in the northern part of the country so that aid organizations can deliver vital emergency relief.

“There is an urgent need to expand humanitarian access because there are still areas that are cut off from aid,” says Mensah. “We are calling on all parties to establish a humanitarian corridor immediately so we can reach these people who are waiting for help.”

CARE is also calling upon the international community to increase its support for a humanitarian response in Mali.

“There were huge funding gaps last year for Mali and for the entire Sahel region, and this year, despite all eyes being on Mali, barely one percent of the funding needs have been met for the current crisis,” says Mensah. “The humanitarian community cannot respond if the funds are not there. Without funding, people will continue without food, without their basic needs being met. This is unacceptable.”

Read “Nightmare in Mali,” a first person account from Diabaly, Mali, as told to CARE >