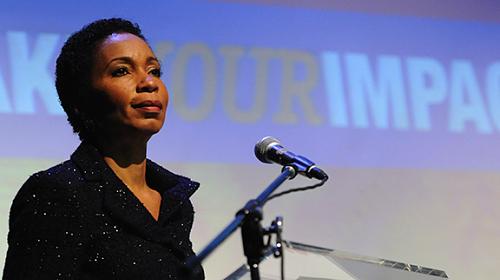 DAVOS (January 23, 2013) – CARE President and CEO Dr. Helene D. Gayle will participate in a panel discussion about the future of poverty eradication, gender equality and other development goals at the World Economic Forum this week.

The panel which will include such influential figures as United Nations Secretary General Ban Ki-moon, British Prime Minister David Cameron and William H. Gates III, co-Chair, Bill & Melinda Gates Foundation will challenge development leaders to provide their vision for what comes after the Millennium Development Goals, or MDGs. Established in 2000, the eight international development goals range from eradicating extreme poverty and hunger to fighting the spread of HIV and AIDS by the target year of 2015. The goals were agreed upon by all 192 United Nations members states and more than 20 international organizations.

Dr. Gayle, the only representative of a non-governmental organization on the panel, said she’s looking forward to an insightful discussion on the deep inequalities that remain between women and men. “Though significant progress has been made toward the Millennium Development Goals, large challenges remain, particularly for girls and women living in poverty,” she said. “Sadly, gender inequalities remain entrenched in many parts of the world.”

Dr. Gayle said such disparities should galvanize the international community to plan for more comprehensive improvements beyond 2015. “We simply can’t leave behind half of the world’s population and think we’ve made considerable progress in the way of eradicating global poverty.”

Others scheduled to appear on the panel, moderated by New York Times columnist Thomas L. Friedman, are Ngozi Okonjo-Iweala, Coordinating Minister for the Economy and Minister of Finance of Nigeria; Paul Polman, CEO, Unilever; and H.M. Queen Rania Al Abdullah of the Hashemite Kingdom of Jordan.