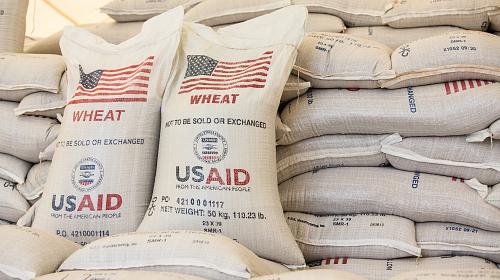 “Experience has shown us that while sending U.S. food is sometimes the appropriate thing to do, there are often more effective ways to respond in crises,” said David Ray, CARE USA’s Vice President of Advocacy, in front of the committee. “The cost of buying U.S. commodities and shipping them on U.S. flagged vessels has proven to be as much as 30 to 50 percent higher than purchasing food locally or regionally, and it can take as much as three times longer to get food to the people who need it most.”

CARE, along with experts from USAID’s Office of Food for Peace, the Farm Journal Foundation and the American Enterprise Institute, provided testimony at the request of Sen. Bob Corker (R-TN), the committee’s chairman.

Food aid programs enable the U.S. to respond to hunger crises such as the famine in the Horn of Africa in 2011, and to disasters such as Typhoon Haiyan in the Philippines or conflict like that in Syria. They also play an important role in emergencies, such as the Ebola outbreak in West Africa, where access to food is compromised.

However, the current U.S. food aid system — which requires shipping food from the U.S. to hungry people in need — is outdated and slow – risking lives when every day counts. And it’s inefficient: as much as half of funding is spent on transportation and administrative costs.

Flexibility would also give the U.S. government some ability to purchase U.S. food aid in developing countries. In other instances, the government can provide vouchers for people to buy food themselves in local markets in areas where there is food available, but prices are too high.

By allowing greater flexibility in the food aid reforms, CARE can build systems so countries are better equipped to feed millions more people. A reformed system will also encourage purchase of food from local smallholder farmers, most of whom are women.

“A reformed and flexible food-aid system would allow us to reach more people, often more quickly and in a more comprehensive manner,” Ray said. “Simply put: That saves lives.”

CARE has been a leading voice calling for an end to the outdated process of open-market monetization also because it impedes efforts to support countries taking charge of their own food production. Relying on U.S. food aid when there is food nearby can also undermine local production and disrupt a community’s long-term development.

In fact, CARE halted its open-market monetization in 2009, walking away from $45 million in federal funding each year.

CARE supports the bipartisan efforts to reform our food aid system that would eliminate the inefficient, often-harmful practice of selling U.S. commodities on open markets to fund non-emergency development work.

View the hearing by clicking here.

CARE has food aid reform experts available to speak to the media. Please contact Stephanie Chen at schen@care.org to schedule an interview.

Founded in 1945 with the creation of the CARE Package®, CARE is a leading humanitarian organization fighting global poverty. CARE places special focus on working alongside poor girls and women because, equipped with the proper resources, they have the power to lift whole families and entire communities out of poverty. Our seven decades of experience show that when you empower a girl or woman, she becomes a catalyst, creating ripples of positive change that lift up everyone around her. That’s why girls and women are at the heart of CARE’s community-based efforts to improve education, health and economic opportunity for everyone. We also work with girls and women to promote social justice, respond to emergencies and confront hunger and climate change. Last year CARE worked in 90 countries and reached more than 72 million people around the world. To learn more, visit www.care.org.

Finding Local Solutions for Food Insecurity in Guatemala and Honduras

Findings from CARE’s Learning Tour to Guatemala and Honduras - April 21-25, 2014

Food and Nutrition Security for All

A 2014 issue brief addressing the need for food and nutrition security for all. Hunger is a complex problem and calls for a comprehensive approach that addresses all aspects of hunger and malnutrition, from emergency to long-term food and nutrition needs.

Issue Brief: Food for All

A proposal to shift food aid reform. Since its creation, U.S.-funded food assistance has helped feed more than one billion people in over 150 countries. But the system for providing this assistance is inflexible and does not meet today's need. President Obama's proposal would shift food aid funding from the Department of Agriculture to USAID, and end the efficient practice of monetization -- funding non-emergency development projects directly.