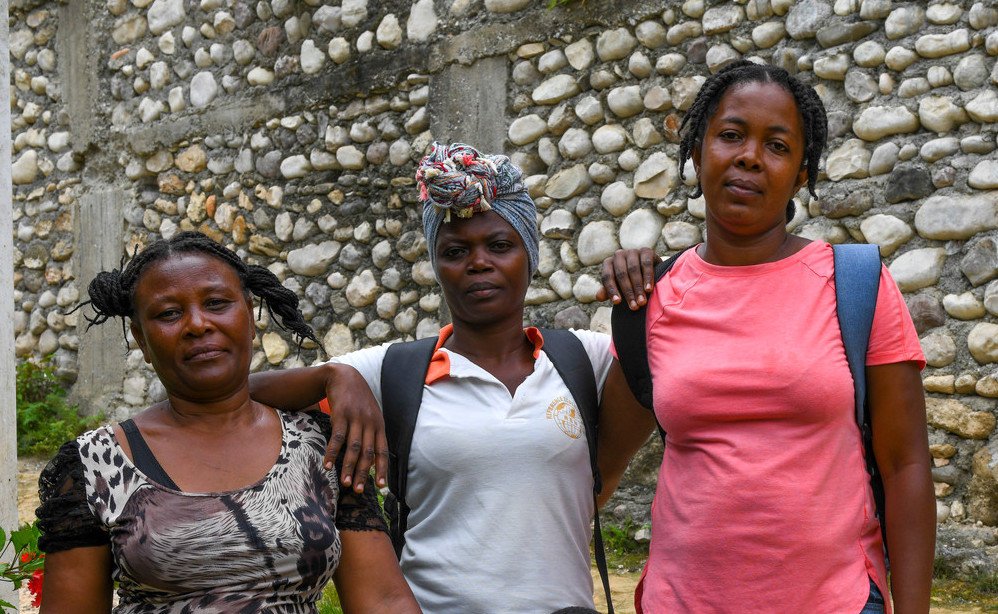 Port-au-Prince, Haiti, September 13, 2021 – Following the 7.2 earthquake that struck Haiti on August 14, UN Women Haiti and CARE International, in partnership with the Ministry of Women’s Affairs and Women’s Rights, the General Directorate of Civil Protection, and the Humanitarian Country Team’s Special Gender Task Force, developed a Rapid Gender Analysis that aims to provide humanitarian actors with recommendations to address the needs of women and girls to ensure their rights and needs are at the core of recovery and reconstruction efforts.

The first findings of the Rapid Gender Analysis, presented today to multi-stakeholders, reported on the specific impacts of the earthquake on people’s lives according to sex, age, and other conditions of vulnerability.

The report credits the lack of potable water as one of the most critical impacts on women. After the earthquake, 60% of communities in the three departments of Sud, Grand’Anse, and Nippes were left without access to this service in the southwest of Haiti. Being for the most part traditionally in charge of family care, women seem to be particularly impacted by water scarcity. Additionally, the findings suggest that approximately over 40% of women are heads of household, and not being able to share these tasks further worsens their situation.

Food insecurity is another issue raised by the report as one of the pressing needs to be addressed. Before the earthquake, 46% of the population had unmet food needs, of which the situation of children, adolescents, and pregnant women was worrying. As the earthquake exacerbated pre-existing vulnerabilities, this situation has further worsened. Those interviewed asserted that they did not receive sufficient support. The most vulnerable, children, the elderly, the sick, and those living with disabilities seem to have difficulties accessing food being distributed.

According to the report, 53.6% of women and 46% of men have already encountered difficulties in accessing health services due to the current health crisis; the lack of housing and shelter is perceived by 83% of those questioned as a factor of insecurity and increased risk of violence; 79% of the population perceive that women participate in large part of the response process, but 22% note that their presence in decision-making is weaker.

“Based on this assessment, we are calling for a more inclusive response that creates space for women, children, people with disabilities, and other vulnerable populations,” said Muhamed Bizimana, CARE Haiti Assistant Country Director. “Without their direct involvement, the recovery is at risk of leaving them behind.”

“We need to make sure that the rights of women and girls are taken into consideration at all levels of the response and guarantee their participation and leadership in the recovery strategy. To do so, we rely on data, which allows us to target and prioritize the needs of those in the most vulnerable situations,” said Maria Noel Vaeza, UN Women’s Regional Director for the Americas and the Caribbean.

The Rapid Gender Analysis suggests, based on the data obtained, the need to ensure that census and distribution operations are planned and conducted in a participatory manner in collaboration with men and women community leaders; to build the capacity of women for responsible participation and leadership in emergencies; to create meaningful civil society consultation mechanisms and community engagement channels; to create, as part of the rapid response, the security conditions to prevent the risks of violence and sexual abuse against women, girls, boys, and the LGBTQIA+ community; and to strengthen the inclusive participation of women in decision-making bodies concerning the response.

UN Women’s work in Haiti is carried out in partnership with the Government of Haiti, civil society and UN actors. Partnerships with the Government of Haiti include the Ministry of Women’s Affairs, the National Disaster Management Agency, the Ministry of Agriculture, the Ministry of Environment and the National Department of Corrections. UN Women works in cooperation with CARE International, OCHA, UNICEF, UNFPA, UNDP, WHO, IOM, WFP and FAO. Partnerships with civil society will include community-based women’s networks, national and local gender equality advocates and social organizations.

CARE started operations in Haiti in 1954 with emergency response interventions. Since then, CARE has continuously grown its programming capacities across the humanitarian, recovery, and long-term development spectrum. Over the years, CARE Haiti has gained experience, local knowledge, and operational capabilities to deliver and shift programming between emergency response, recovery and long-term development programming, as the country context changes. For example, CARE was amongst the first organizations to engage in various aspects of the COVID-19 response.

Senior Communications Advisor, UN Women’s Regional Office for the Americas and the Caribbean

Your gift to CARE’s Humanitarian Surge Fund helps us rapidly respond to any crisis with emergency food, shelter, health services, and hygiene kits. When lives are in the balance every moment counts.