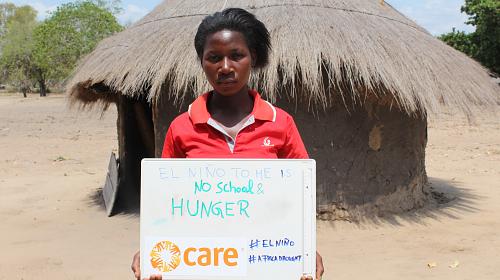 (January 10, 2017) Millions face hunger in Southern Africa as the hunger crisis enters its peak, warns the humanitarian aid organization CARE. The worst drought in 35 years has a continuous, devastating impact on the lives of 40 million people who are in urgent need of food assistance. “We have warned for months that this food crisis deteriorates by the day. We are now approaching the peak of hunger, but international funding still doesn’t match the enormous needs,” says Michelle Carter, CARE’s Deputy Regional Director for Southern Africa. So far, there is a funding gap of 550 million dollars to reach people in desperate need of assistance. The next harvest is not expected until March and after the failure of two consecutive rainy seasons, farmers have no more resources left.  The El Niño induced drought is disproportionally affecting women and children, especially young girls are dropping out of school due to lack of water and food. According to a recent CARE study, women increasingly resort to survival sex and other forms of exploitative behaviour in return for money and food.

“The international community needs to act now. A lot of damage has already been done, especially for children. They cannot achieve their full mental and physical potential, simply because they go hungry,” says Carter. Almost 1.3 million children require treatment for malnutrition. In Madagascar, Malawi, Mozambique and Zimbabwe alone 14 million people are in urgent need of assistance, with governments having declared national emergencies as the scale of the drought has overstretched national coping mechanisms. Southern African countries are amongst the poorest countries in the world, with half of the population living on less than US $ 1 a day. “CARE and other organisations have the expertise to help people survive the current drought and prepare themselves for future shocks. However, donors need to step up their funding so we can provide urgent food assistance.”

CARE also urges that funding needs to cover strategies to mitigate risks and build resilience for future shocks. Sustained support to help people recover once the current crisis is over and ensure longer term support to break out of the cycle of poverty, climate change and food insecurity are urgently needed. “Without additional funding, we will see more people dying of hunger. More children will suffer irreparable damage from malnutrition and die of preventable diseases,” says Carter.

CARE assists people affected by the current drought in Zimbabwe, Malawi, Madagascar and Mozambique. CARE aims to reach at least four million people with food until the end of May, repairs broken water systems and establishes new ones. CARE is also working with families in drought affected areas to increase the productivity and profitability of crops, and works with farmers on using modern farming techniques. CARE additionally supports village saving groups to help people set up alternative sources of income, and become more resilient to climate change and reoccurring natural disasters.