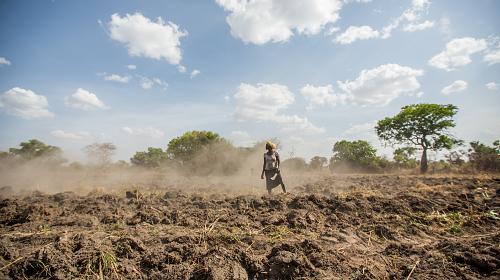 MADRID (December 15, 2019) – At the conclusion of the 25th Climate Conference of the Parties (COP25), CARE expresses its deep concern over the large disconnect between the reality of the climate emergency and people’s demands for climate justice, and the bare minimum that governments pieced together at the negotiations. Delivering enhanced national climate plans that close the gap in emissions to achieve the Paris Agreement’s 1.5 °C limit by Spring 2020 is now the challenging task faced by countries, as they return home to a public that is increasingly outraged by the climate emergency.

CARE believes that the outcomes of COP25 are completely disconnected from the demands of people across the world to address the climate emergency. “Governments from big polluting countries, like the USA, Brazil, Saudi Arabia and Australia, continue down a path of dangerous inaction and are undermining international efforts to prevent the increasingly eminent climate breakdown,” says Inge Vianen, Global Leader of CARE’s Climate Change and Resilience Platform. “Nations like the EU, China, and India must now seize the opportunity to take leadership to ensure all countries cooperate and deliver improved national climate plans. Lack thereof would risk global surrender to the climate crisis and failure to achieve the Paris Agreement goals,” adds Vianen.

During two weeks of negotiations, developed countries, especially the United States of America, have largely refused to heed the most vulnerable countries’ reasonable demands for support when they are hit by climate disasters. “It is not the house of the rich countries that is burning, it is the land of the poor – but it is the rich countries’ emissions that have set the fire,” says Sven Harmeling, CARE’s Global Advocacy Lead on Climate Change and Resilience. “With the disappointing loss and damage outcome from COP25, including a vague mandate for the Green Climate Fund, the fight for new and additional resources and climate justice will continue.”

As an organization that places additional focus on the impact of emergencies on women and girls, as they are often the worst impacted in times of crisis, CARE particularly welcomes the adoption of the gender action plan at COP25. “The adoption of the gender action plan will increase women’s participation in international climate talks and national climate action, and help grassroots women’s organizations access climate finance,” says Vitumbiko Chinoko, CARE’s Partnerships and Advocacy Coordinator in the Southern Africa region. “However, the resistance from some countries over the past two weeks in the gender plan negotiations clearly demonstrates that hard-won gains of human rights and gender justice continue to be threatened.”

Women often bare the brunt of poverty around the world, and climate change affects them especially. When access to necessary resources, such as water, food or cooking fuel, is limited, women are forced to work harder and longer to provide for their families. We see this time and again in hard-hit areas. In developing countries, more than two-thirds of women in the labor force work in agriculture. When resources are scarce due to retreating glaciers, changes in rainfall or a weather-related disaster, women’s livelihoods and the survival of their families is threatened.

When resources are scarce, girls suffer, too. Some girls may not be able to go to school because they’re spending time walking longer distances to gather wood or water; their families have less money to pay for their school fees; or they’re simply too hungry to attend.

CARE’s work in the face of climate change: