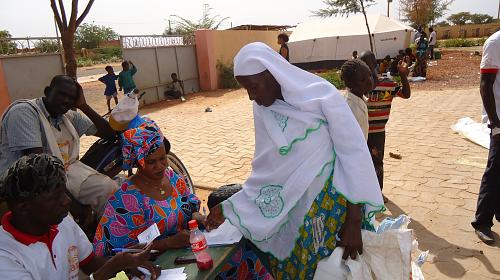 BAMAKO (January 31, 2013) – As fighting has subsided in Timbuktu, CARE and our local partners are ready to restart activities and support both returnees and people who have remained in the conflict-torn city. In the coming days, CARE will distribute more than 18,000 metric tons of food to more than 131,000 people.

“We know that people in Timbuktu have gone through a great deal of suffering, and have been forced to take tough decisions,” said Claudine Mensah Awute, country director with CARE Mali.

“Those who remained have not only been living in fear for nearly a year, but were cut off from everything. Schools, clinics have been shut down. There has been a lack of electricity and water. Food prices have been rising steeply, in some areas of northern Mali skyrocketing up to 90 percent.

“Those who fled – often women with their children or children by themselves – have been separated from their husbands or fathers. They have been living from one day to another, relying on good-hearted relatives or assistance from aid organizations, such as CARE.

“Many are ready to return to Timbuktu but they know that there is little to nothing waiting for them back home. In the next days, food supplies provided by the World Food Programme will arrive in Timbuktu and CARE and its partners are on the ground, ready to distribute this food to people in need,” said Awute.

CARE calls for US$1 million to assist Malians in need and respond to their most urgent needs over the coming three months.

“The fact that during the recent Donors Conference in Ethiopia, over $450 million was provided to support military operations demonstrates the ability of the international community to mobilize resources for Mali. There is a need for a similar level of commitment and mobilization to meet urgent humanitarian needs,” said Awute.

There are significant unmet humanitarian needs in both Mali and in neighboring countries hosting refugees. Since January 11 alone, more than 15,000 people have fled the country, and more than 9,000 people have been displaced in southern Mali. According to OCHA, there are now nearly 400,000 Malians displaced because of the conflict.

In Ségou and Mopti, two of the five areas in most need of assistance, CARE has been supporting displaced people and host families with food and basic relief items such as mosquito nets, soap, kitchen utensils, tarps, blankets and sleeping mats. To date, CARE has reached 22,000 people with food.