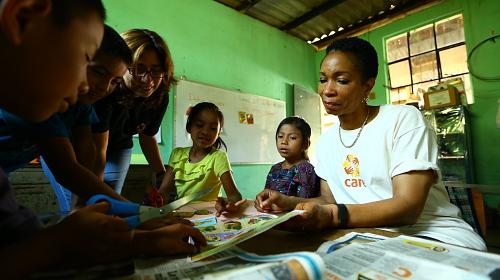 Former Secretary of Agriculture Dan Glickman, corporate sector partners from Cargill, and the media also traveled on the trip to bring their expertise and perspective to issues around global hunger.

During the four-day Learning Tour, the delegation had the opportunity to visit food and nutrition security programs throughout Guatemala and Honduras. These programs showcased the lives of smallholder farmers and the daily challenges they face in improving their nutritional status, gaining access to local markets and creating sustainable business ventures.

There are more than 850 million people around the world who do not have enough to eat, and most of them are women and girls. Guatemala and Honduras are both recipients of U.S. food aid and long-term food and nutrition security investments. However, both of these countries still struggle with high malnutrition and stunting rates, particularly in rural areas.

Guatemala stands out as having the highest malnutrition rate in the Western Hemisphere and the fourth highest globally. Nearly fifty percent of children under the age of five are chronically malnourished, and stunted growth is common. While enough food is generally available in both countries, many families do not have adequate purchasing power to attain a diverse and nutritious food diet. Food insecurity is most severe in the Western Highlands region where the delegation spent a large portion of their visit.

In neighboring Honduras, people face similar challenges in accessing nutritious food. About 60 percent of the population lives in poverty. While Honduras has made headlines in recent years because of violence and drug wars, it is also a country of  where economic opportunities abound. Here, U.S. corporations such as Cargill are finding new markets to sell their products and services.

Trip participants delved into the role the private sector is playing in addressing these issues. The delegation visited two partnership programs between CARE and Cargill in Guatemala and Honduras. Delegates learned about what makes a strong private-public partnership and the growing importance of “shared value” for corporations.

The trip began in Guatemala where the delegation met with U.S. government officials to discuss current food and nutrition initiatives in the country. The group spent the second day visiting a peer counseling program for mothers. The goal of the program is to reduce stunting in children under two years old by training mothers to be counselors to other mothers on issues such as nutrition, and infant feeding and care practices.  The delegation then visited a Food for Progress, U.S. Department of Agriculture, program that helps poor households expand their agricultural value chains and supports the Government of Guatemala to improve the agricultural extension system.

On the third day of the visit, the group met with farmers who were part of CARE and Cargill’s Nourishing the Future project. This program helps smallholder farmers increase their incomes by linking them to functioning markets. As a result, 900 producers in the program have diversified and increased their incomes. With higher incomes, smallholder farmers are empowered to buy and grow more nutritious food for their families.  The trip in Guatemala concluded with a meeting with private sector representatives and discussion on how the private sector works in partnership with NGOs on development issues.

The group headed to Honduras for the second half of the trip where they visited a United States Agency for International Development (USAID) program that is helping lift more than 30,000 households out of poverty by improving their health and nutrition practices and helping them start small businesses. The program is increasing smallholder farmers’ sales and incomes by introducing them to improved agriculture techniques and market-driven programs for high-value cash crops, as well as expanding off-farm microenterprise and employment opportunities. They also visited another CARE and Cargill partnership program which is empowering women to develop local businesses.

Founded in 1945 with the creation of the CARE Package®, CARE is a leading humanitarian organization fighting global poverty. CARE places special focus on working alongside poor girls and women because, equipped with the proper resources, they have the power to lift whole families and entire communities out of poverty.

Our six decades of experience show that when you empower a girl or woman, she becomes a catalyst, creating ripples of positive change that lift up everyone around her. That’s why girls and women are at the heart of CARE’s community-based efforts to improve education, health and economic opportunity for everyone. We also work with girls and women to promote social justice, respond to emergencies and confront hunger and climate change. Last year CARE worked in 84 countries and reached more than 83 million people around the world. To learn more, visit www.care.org.

Putting Evaluations Into Practice: 20 Years of Food For Peace

This 34 page brief shows us lessons learned from 20 years of Food For Peace Programming.

Findings from the CARE Learning Tour to Djibouti and Mozambique. From August 17-23, 2015, a delegation of U.S. Senate Agriculture Committee staffers, the Administrator from the U.S. Department of Agriculture and a technical expert from Global Child Nutrition Foundation, traveled to Djibouti and Mozambique to see how U.S. investments in food and nutrition security are providing short-term food assistance to those in need, while also building the capacity of smallholder farmers to sustainably produce enough nutritious food to feed their families and lift their communities out of poverty.

A Recipe for Alleviating Chronic Malnutrition in Mozambique

Findings from the CARE Chefs’ Learning Tour to Mozambique

This 70 page report documents the findings of the SHOUHARDO II program, a Food For Peace program in Bangladesh that aims to reduce...

GRAD: Graduating Out of Social Assistance And Into Long-Term Food Security

GRAD is a five-year USAID-funded project designed to build on the Government of Ethiopia’s Productive Safety Net Program Plus (PSNP)...

This 8 page guide lays out the steps of how to use CARE's Participatory Performance Tracker.

This 2 page guide describes CARE's Participatory Performance Tracker tool, and outlines when it is useful.

CARE is committed to both food security and climate change adaptation as programming and policy advocacy priorities.