Rep. Lois Capps, D-Calif., Travels with CARE on a Learning Tour to Jordan 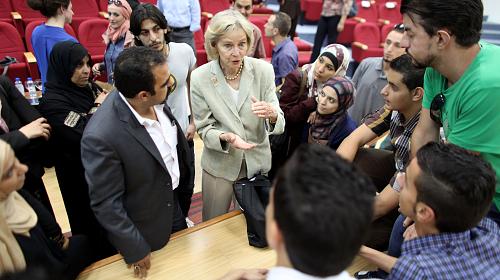 WASHINGTON, D.C. (August 23, 2013) – As the humanitarian crisis in Syria escalates, Rep. Lois Capps, D-Calif., traveled with the global poverty-fighting organization CARE on a Learning Tour to Jordan to better understand the impact of the humanitarian crisis and the long-term development efforts designed to remove barriers facing women and girls.

The three-day Learning Tour featured a half dozen program visits to not only learn more about how Jordan is helping meet the immediate needs of refugees but also see long-term investments in women and girls. The trip focused mostly on women and children, who account for more than 78% of the refugees who have fled Syria.

The civil war in Syria has left more than 8.5 million people in the region in dire need of help. The government of Jordan estimates that there are 501,000 Syrians in the country. Officials estimate between 2,500 to 4,000 refugees are being registered at the camps daily.

Women and children who have fled the violence without a male head of the household are particularly vulnerable and have distinct needs for assistance.

During the first day, the delegation visited Za’atari Refugee Camp, the largest camp in Jordan and the country’s fifth-largest city. Concerns have risen over the Jordanian government’s capacity, infrastructure and resources to address the steady flow of refugees. The delegation heard how many international NGOs, including CARE and UN agencies, are advocating for more resources to assist refugees with the distribution of food and other aid items.

The delegation also explored the challenges facing urban refugees. With a majority of the Syrian refugees living in urban settings, this has put a strain on many major cities such as Amman. CARE’s efforts are helping urban refugees adapt to their new lives and has reached more than 30,000 refugees.

“The family that stuck out to me was the urban refugee family because they were one example of thousands of people who are invisible,” said Rep. Lois Capps. “They have gone through these experiences [fleeing Syria] and now are trying to fit into a new life without much support.”

These refugees have arrived with little or no savings and battle with rising rental and living costs. They are often forced to take refuge in vacant buildings and makeshift shelters, lacking access to water and sanitation, and at risk of contracting diseases.

To combat this problem, CARE has provided cash vouchers that give people the flexibility to directly pay for housing or buy essential food or medicine. CARE has also given case management support and connected refugees to other local partners and services that can provide further assistance.

“Without any income and hopes to go home any time soon, the refugees are trapped in a twilight zone of poverty, traumatic memories and fear for their future,” said Salam Kanaan, country director of CARE Jordan. “It is therefore extremely important to help Syrians build support within their host communities and instill a sense of integration to avoid potential tension and break the isolation of refugees.”

Despite Jordan’s progress, including a stable economy over the past five years, high unemployment rates persist, as do pockets of poverty. So the delegation visited CARE and partner programs that worked to strengthen communities by empowering women and girls.

The group saw one of CARE’s signature Village Savings and Loans Association (VSLA) groups, made up mostly of women, that pool their own money and give each other loans, offering basic financial services to people who are often excluded from the conventional financial services system. CARE Jordan began its VSLA activities in January 2013 and have targeted 1,000 women. The delegation met with women who had started their own small businesses with their savings.

The delegation also visited CARE’s Women’s Empowerment through Stage Animated Awareness and Lobbying (WESAL) Program, which comes from the Arabic word “to join”. The program participants put on an interactive community theatre performance to highlight the issue of violence against women in Jordanian communities.

The knowledge gained from this trip will help participants and CARE continue to advocate for support and funding for these initiatives in Jordan and throughout the developing world. For more information on CARE’s Learning Tours, visit www.care.org/get-involved/advocacy/learning-tours. CARE Learning Tours are funded by the Bill & Melinda Gates Foundation.