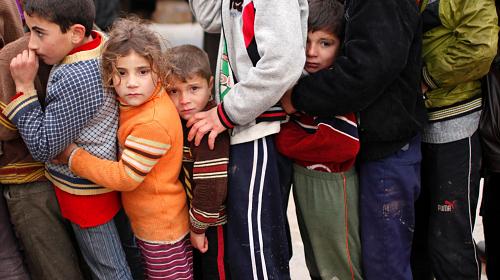 (August 1, 2013) – Many Syrian refugees living outside camps across countries in the region are losing out on the help they desperately need, according to five international aid agencies today.

CARE International, Oxfam, Danish Refugee Council, Handicap International and World Vision are increasingly concerned that with more than 1.4 million – 80 percent of all Syrian refugees – living in tents, temporary settlements, or over-crowded and expensive rented accommodation, the international response is failing to match the scale of the crisis.

Neighboring countries are struggling to cope with the huge number of refugees. In Lebanon Syrians make up a quarter of the population1 and are living in at least 1200 locations. Just 131,000 of the half a million refugees who fled to Jordan are living in Zaatari camp. Many refugees, particularly those scattered outside cities across the region, struggle to get information on the support services that are available to them.

The aid agencies say that the international community must massively step up its response to the growing crisis.

“People are living in shopping centers, empty garages or make-shift tents on derelict land. They are struggling to survive on little or nothing, and many are falling through the cracks. With no immediate end in sight to the conflict the problem will only get worse. The UN describes this as the biggest refugee crisis since the Rwandan genocide in 1994 and we need to make sure assistance reaches refugees no matter where they are,” said Oxfam’s Syria Response manager, Colette Fearon.

The aid agencies are calling on donor countries to dig deep and find more money to help them scale up the humanitarian response, particularly in Jordan and Lebanon which are hosting more than a million refugees between them. There is also a growing need to support host communities and governments, where basic services are coming under pressure from increased use.

At the same time, almost 7 million people – a third of the population – are desperately in need of aid inside Syria.

In June, the UN launched its largest ever humanitarian appeal for $5 billion to support the Syria crisis but has only received 36 percent of the money required.

Due to the huge number of people fleeing the conflict, refugees are pursuing whatever options they can to find shelter. Many arrive with just the clothes on their backs and need help to cover basic costs such as food, safe drinking water and a roof over their heads.

Health care has become a luxury that many cannot afford. For people with injuries, the situation is especially critical as the lack of available services often leads to further impairments. Vulnerable groups, such as the elderly and persons with disabilities or chronic disease, do not have access to essential services, unless they are offered by organisations like Handicap International.

According to World Vision, rents in parts of Lebanon have soared, often by as much as 200 percent in just a six month period. Though rents are increasing, employment opportunities and pay have not kept pace. In Lebanon, where refugees are prohibited from working in many professions, jobs that are available are usually poorly-paid and offer little or no security. While some agencies, including CARE and Oxfam, are offering cash support to help refugees pay their rent, this is not a long-term solution.

“People left Syria with nothing and are trying to carve out a new life for themselves. But they are starting from scratch and everything is expensive. Many are getting into increasing debt in order to survive,” said Hugh Fenton, Danish Refugee Council Regional Director in North Africa and the Middle East.

“The international response so far has failed to meet the basic needs of the majority of the refugees, putting them at risk of further hardship and suffering. We need donor countries to dig deep and increase funding so aid agencies can expand their relief efforts. With the number of refugees rising and their needs increasing, it is critical the international community do more to fill the funding gap that is preventing us helping more people: failure to do so could be catastrophic.”

The agencies also say fears are mounting of the impact of poor living conditions on refugees’ health. Even among those refugees living in rented accommodation, few have access to running water or a separate toilet or bathroom and those living in tents have limited sanitation facilities, increasing the risks of disease particularly given temperatures regularly reach 110 degrees Fahrenheit. In Jordan, more than a quarter of refugee households in the Mafraq region have no access to water, while some children living in a tent community in West Balqa could only bathe once every 10 days.

Interviews, pictures and film are available on request.

CARE has reached about 110,000 Syrians in Jordan, providing cash assistance to pay for basic living costs, including rent, food and clothes, essential relief items and vital information on how to access further health care and social support. In addition, CARE supports Jordanian host communities. In Lebanon, CARE is planning to meet approximately 150,000 refugees’ and vulnerable host communities’ basic and pressing needs. In Egypt, they aim to reach at least 20,000 refugees with cash support and assistance on sexual and gender based violence.

Danish Refugee Council (DRC) has a long history in the region and is currently present in Syria, Lebanon, Jordan, Turkey and Iraq. More than 550,000 displaced people have received assistance from DRC in the region in the first six months of 2013, more than 300,000 of those inside Syria. DRC’s assistance includes distribution of mattresses, blankets, clothes, hygiene kits, diapers, food and fuel coupons as well as help with shelter and livelihoods.

Handicap International has worked in the Near East since 1987 around development, mine action and emergency activities. Its emergency division is currently working in Syria, Lebanon and Jordan to provide food, non food items and cash assistance to 80,000 vulnerable persons affected by the Syrian crisis. To date, HI also identified more than 8,500 people with specific needs (disabilities, injuries, chronic diseases and ageing), channelling them to humanitarian services and providing them with specialised assistance, such as essential physical rehabilitation, prosthesis, mobility devices and psychosocial services.

Oxfam is providing aid to those affected by the crisis in Jordan, Lebanon and Syria. To date they have helped more than 250,000 people and plan to help 650,000 by the end of this year. In Lebanon and Jordan, Oxfam is providing vulnerable families with cash assistance to help them afford a place to live and improving access to safe water and sanitation. Infrastructure inside Syria has been badly damaged by the ongoing conflict and Oxfam has started work to provide emergency water and sanitation to up to 300,000 people throughout the country.

World Vision has worked in the region for more than 30 years and is responding to the needs of people fleeing the conflict, in Syria, Lebanon and Jordan. World Vision is reaching more than 220,000 people across the three countries with health services, emergency supplies, clean water, sanitation and child protection support.