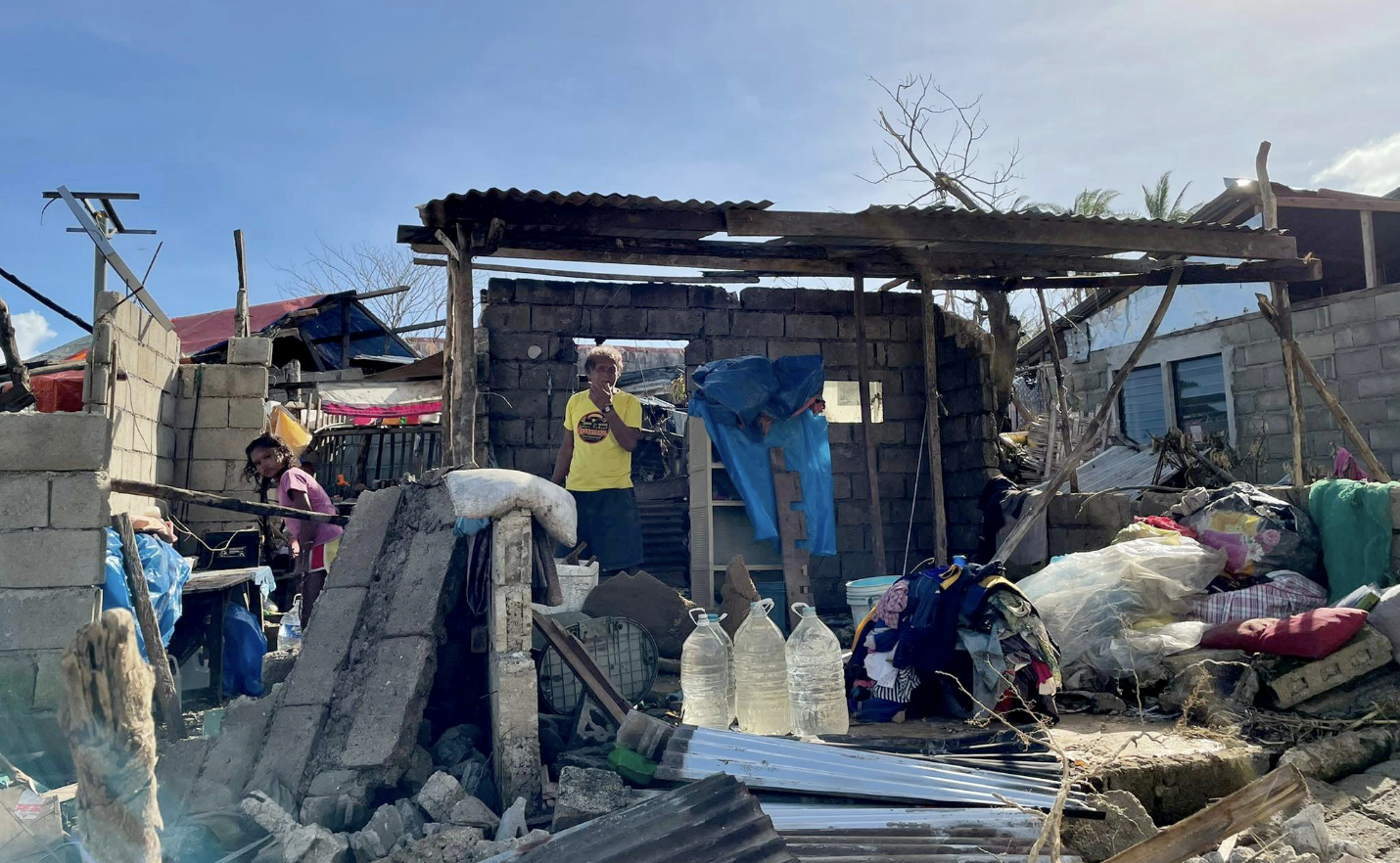 Manila, Philippines, 21 December, 2021 – As Typhoon Rai (Odette) hits southern and central Philippines, the impact of local disaster preparedness and mitigation measures shows the importance of planning for climate shocks amidst a worsening global climate crisis. However, despite these pre-emptive measures, the country’s strongest storm of the year still leaves widescale devastation in its path.

Communication lines remain down in the hardest hit areas. The number of people affected continues to rise, with over 1.8 million people now in need, more than 600,000 displaced in cramped and damp evacuation camps, and almost 375 casualties. Heavy rains caused floods and storm surges that reached up to 6 ft in some areas with landslides blocking major roads and highways and destroying hospitals and airports.

Ansherina Talavera, CARE Philippines Program Manager says; “We are looking at a major humanitarian crisis. We are seeing hundreds of thousands of people displaced, and roads and power lines have been washed away. Over 28,000 homes have been destroyed and more than 260,000 schools have been damaged. In some areas, power is not expected to return for at least a month. Access to some of the worst affected areas, particularly remote islands, remains a big concern due to destroyed private and public sea vessels.”

The main needs include access to everyday essentials that were washed away by the typhoon, such as food and key household items, including equipment for cooking hot meals, as well as clean, safe drinking water. Temporary shelter for those who have been displaced is also a critical need, along with medical and hygiene kits, particularly in island communities that are hard to reach, even in normal circumstances.

A fisherman mentioned to the CARE assessment team, “While we want and can go out to sea to fish for our food, we can’t leave our families back on the island without shelter over their heads.”

CARE’s local partner ACCORD shares their experience on the ground, “The local government has no seacraft. All of them are damaged. Not one house was left standing. No assistance has arrived. The people have nothing to eat. If there is a word that can describe worse than worst, that is the situation.”

David Gazashvili, CARE Philippines Country Director says; “The level of devastation caused by the typhoon is truly heart breaking. We are seeing Haiyan-esque levels of destruction. From the places our teams and partners have reached, 80-90% of houses have sustained heavy damage.”

The Philippines has also been one of the hardest hit by the COVID-19 virus in the Asia-Pacific region. The country has recorded over 2.8 million cases and more than 50,000 deaths since the start of the pandemic. In the past few days, it also saw its first reported cases of the new Omicron variant. This has added strain on public services, local communities and humanitarian agencies in-country, weakening people’s capacity and ability to respond to humanitarian disasters.

CARE has already begun providing key life-saving assistance in more than twenty communities in Agusan del Sur, Agusan del Norte, Surigao del Norte, Suridao del Sur, Misamis Oriental, and Southern Leyte. CARE Philippines and partners, with support from the Philippine Coast Guard and City Social Welfare Office of Surigao City, have been the first to reach communities in the outlying islands of Danawan, where staff report that everything has been washed away and people have yet to receive any form of humanitarian assistance since the typhoon hit. CARE is working with partners both local and international to ensure these island communities are provided aid as soon as possible.

Alongside local and coalition partners, CARE plans to provide those affected with food supplies, water, sanitation and hygiene kits as well as other key household items, including solar lamps, as power remains down across many of the affected areas. CARE is looking to raise US $20 million to support those most affected by this latest typhoon.

Gazashvili notes; “Once people have received immediate life-saving assistance, we will also need to look at longer term rebuilding and support. Sadly, the Philippines is becoming all too used to these terrible seasonal storms that cause such devastation. We know from Typhoon Haiyan that recovery from this kind of natural disaster can take years.”

He adds; “Despite all the extensive mitigation measure put in place, people’s homes, and livelihoods have still been destroyed and the needs remain huge. On top of this, we are also expecting more rains and a storm over 24th and 25th December as new weather systems are forming over the Pacific. We are once again asking donors to step up and assist and not forget the people of the Philippines in their time of need.”

Founded in 1945 with the creation of the CARE Package®, CARE is a leading humanitarian organization fighting global poverty. CARE places special focus on working alongside women and girls. Equipped with the proper resources women and girls have the power to lift whole families and entire communities out of poverty. In 2020, CARE worked in over 100 countries, reaching more than 90 million people through 1,300 projects. To learn more, visit www.care.org.