The Bread Maker of Eastern Ghouta 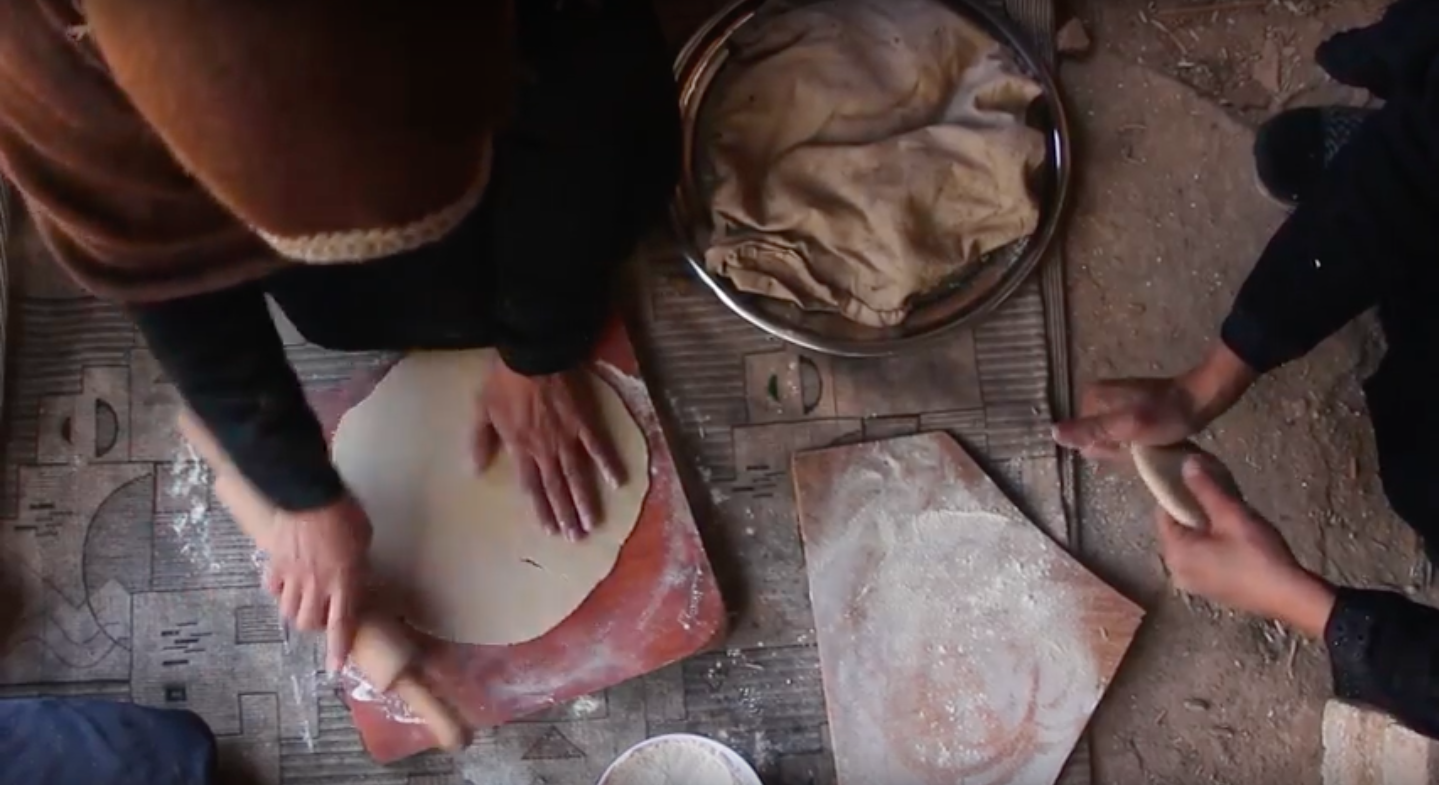 “When life becomes almost too much to bear, and no one but God is left to provide for you, you become an inventor to support your family."

In Syria’s Eastern Ghouta, I came across a structure with smoke rising from it. Inside, a 45-year-old woman sat with her three children and elderly husband, who was unable to move, looking out through the opening where the door should have been. Outside, a young man with a cart hurried in our direction. The children — two boys and a girl — were busy collecting plastic bags and fallen leaves for their mother to bake with.

“What are you making?” I asked her.

“When life becomes almost too much to bear, and no one but God is left to provide for you, you become an inventor to support your family,” she said before sharing her story.

13.5 million The war in Syria has displaced more than half the pre-war population

“My husband used to work on cars, and he provided us with what we needed. But then he fell ill and became bedridden, and he could no longer work. So my son began working in the alleys of Ghouta and he was able to provide for us. But then a grenade destroyed his thin legs. My husband was unable to move, and my son was badly injured so I was left with no one to provide for me or my children.

“Little by little, my son’s condition began to decline. There was not a piece of bread in the house. There was not even a single olive. I couldn’t go out to work because it would mean leaving my children alone with my husband with his situation. And so, I accepted my son’s injury, my husband’s illness, and my own exhaustion for what they were, and decided that I would not watch them die. I sat in that room in front of the fireplace, miserable, staring at a pile of sticks. What can I make out of a pile of sticks? I thought long and hard. And in a moment of inspiration, I realized that I could turn my misery into life. I would gather up that brittle pile of sticks to bake bread, bread filled with life and colored with hope. With that pile of sticks, I set my misery on fire and reignited the flame of life.

“I began baking bread, and eventually I baked so much that I became famous throughout my entire region. It got to the point where people were racing to get to my house so that I might bake them bread, bringing their flour with them, the varying qualities of which reflected the range of their personal wealth, from poor to poorer. Among those who brought me their flour were people with wheat flour worth as much as 3,000 Syrian Liras a kilogram. These were people who had been blessed with prosperity. It was the case not long ago that the only people who ate wheat were poor. If the wealthy are eating wheat now, what do poor people eat?

With that pile of sticks, I set my misery on fire and reignited the flame of life.

“Among the people who bring me their flour are also those with barley — costing 1,500 Liras a kilo — which has been mixed with seeds of yellow corn — costing 1,000 Liras a kilo — and some grains of wheat. By mixing these together they are able to get bread of a medium quality. These are members of the middle class. There are also those who bring barley, but they do not come often. Finally, there are those who bake with feed, which costs 800 Liras a kilogram. They hardly ever seek out my services, because they do not have enough money to pay me, even though my price is low when you consider the overall increase in prices. They prefer, instead, to bake their bread at home, and thus avoid paying the 300 Liras I charge for each kilo of flour. They bake their bread themselves even though they don’t have any wood for the fire. This means that they are left to go out to the garbage containers and collect plastic bags or gather leaves by the side of the road, so that they can bake their feed bread. Yes, in Ghouta human beings are turned into animals. But they preserve their dignity.

“It’s true, those who bake with feed are poor, but even they appear rich when you compare them with some of the others. At least they are able to afford the price of feed. Many of Ghouta’s inhabitants can’t even afford feed or other animal food to eat. They are left with no other option than to pick the shrubs that grow by the side of the road.

“What’s more humiliating than that? Very seldom they buy cabbage and spinach at the market, which they cook with water only, and eat without bread. They do this with money they have borrowed from family members, and it amounts to nothing more than a small meal, barely enough to survive, which they eat, at most, once a day.

“Only the luckiest of the people of Ghouta were able to prepare themselves for the siege. They grew wheat and barley, which they stored in years past, and which they now use to bake bread, while this crippling siege continues.

“The people who bring me wheat to bake them bread are either people who grew and stored their wheat before the siege began, or they are people whose daily income is high, namely the small merchants. The big merchants never bring me their flour to bake. They get their bread directly from the ovens.

“As for the people who bring barley, they either grew it before the siege began, or they get it from one of the low-priced distribution centers, which distribute for 500 Liras a month and give out five kilos per family.

“It is not all people from those social classes who come to me. Sometimes the people who come to me are either men whose wives work outside the house in order to help them pay for living expenses because these costs have become such a burden, and so they don’t have time to bake bread, or they are people who don’t have firewood and would prefer not to go out to the garbage containers and gather nylon bags to burn. If they were to go out and buy firewood, this would require a lot of wood, and, at 300 Liras a kilo, that is very expensive.

“On the other hand, most of the ovens are not running due to the increase in fuel prices. In the town in which I live, for example, there is only one oven, and they do not accept people who bring their own flour. Moreover, they only bake with pure wheat flour, which, at 4,000 Liras a package, is too expensive for normal people to buy, given their meager daily salaries. For this reason, they resort to homemade bread. The packages of oven-made bread come from the big, monopolistic merchants, who buy them all regardless of price, which they are able to do because they can exploit the inhabitants of Ghouta, who are cut off from the world.

“As for the lower-quality packages of flour, which are used by some of the industrial ovens in the surrounding areas, they contain a mixture of wheat, barley, and corn, and cost 2,600 Liras each. But they weigh only 750 grams and do not suffice to feed even three people for a single meal.

“Through my work, I have broken the siege, come to the aid of myself and of my children, and supported my husband, who supported me for so long. I have been, in a way, reborn, and from my baking I have made for myself a new life.”

The author Rukia Alshamy works for Women Now for Development, a CARE partner in Syria.